The inaugural pilgrimage to the Pilsner Urquell brewery in 1987 was an epochal day even though we were denied entry. I’ve tasted thousands of beers since, and always return to this one. This account is best accompanied by Antonín Dvořák’s Slavonic dances, which in my mind always will be synonymous with passages through the Czech countryside.

Previously:40 Years in Beer, Part Thirteen: In 1987, it was almost “impossible to find bad beer” in Czechoslovakia.

For as long as Barrie and I had been talking about visiting Czechoslovakia, we had considered only two firm itinerary prerequisites. The glorious city of Prague obviously landed at the top of the chart. Perhaps less easy to fathom at first glance was our interest in the city of Plzeň (or Pilsen in German), 65 miles southwest of Prague, with a present day population of 175,000.

As a recorded settlement, Plzeň’s history goes all the way back to the year 976. The city remained Catholic during the Hussite wars and became an increasingly important trading center on the route to Germany. In 1869, the founding of the Škoda Works kicked off an era of rapid industrialization, which made Plzeň one of the arsenals of the Austro-Hungarian Empire.

All those Škoda automobiles we saw in Czechoslovakia? They were manufactured in Plzeň, but we weren’t gearheads, and preferred to take the train, not drive, because drunk driving isn’t good, and our plan for Plzeň involved drinking a great deal of Pilsner Urquell beer—or as it is known in Czechoslovakia, Plzeňský Prazdroj.

The very word “Pilsner,” as it has come to English speakers, is both an adjective and an appellation: “Beer from Pilsen,” using the German-language rendering of the city’s name. Obviously, beer has been brewed in Plzeň (Czech) for centuries, though the current brewery dates to 1842.

Certain families in Plzeň had been granted brewing rights during medieval times. During the early 1800s, as modern brewing techniques were being harnessed to the scientific method elsewhere in nearby Vienna and Bavaria, it occurred to these brewing stakeholders that the spirit of the age, and the “higher tech” direction being traveled by beer and brewing science, suggested a pooling of resources to achieve better quality and competitiveness.

The Pilsner Urquell brewery was capitalized and born from this revelation, at an indisputably ideal juncture.

Modern malting processes were yielding consistent pale malts. The water in Plzeň was soft, and hops grew in abundance nearby. The notions of selectively standardizing yeast strains and aging (“lagering”) beer resulted in a mellow flavor profile. It was clear, not cloudy, and brilliant gold. Glassware was starting to be mass-produced and affordable for all, and the color and clarity were accented by glass rather than submerged by dense ceramic or wooden mugs.

Needless to say, we’d come to adore “Urk,” as Barrie dubbed it.

(As an indication of the way one’s memory plays tricks, I was about to add that Michael Jackson’s television series The Beer Hunter was an inspiration for our Ur-Quest in 1987, but it couldn’t have been. The series debuted in the UK in 1989, and in America the following year.)

On July 15, 1987 we caught a train from Prague to Plzeň, got there well before noon, and quickly reconnoitered. From the station, the Pilsner Urquell brewery was easy to see and smell, although we knew to inquire at the official state-run Čedok travel agency (actually established in 1920, prior to communism), which surely would be located somewhere in the center of the city.

It was. This task was accomplished in due course, and we were summarily rebuffed. No one at Čedok had the slightest interest in helping us score a brewery tour. The lone English speaker we found was exasperated; didn’t everyone on the planet know that Pilsner Urquell brewery tours only took place once a week on, well, any day except today?

It was frustrating, but this was the nature of things during Czechoslovakia’s final years of deterioration prior to the Velvet Revolution in 1989. There was no reward for travel agency employees to go out of their way to help us; perhaps a bribe might have sufficed, but our lone English speaker had a very hard face, indeed.

Plan B commenced. We walked to the Pilsner Urquell brewery and made tepid inquiries at the guard shack. No English was spoken; at least the rejection was friendlier, and the uniformed personnel seemed impressed that we’d traveled 4,600 miles just to drink their beer.

For years afterward, Barrie’s version of what happened next remained consistent and perhaps only slightly exaggerated:

“We couldn’t get inside the brewery, so I went over, kissed the lock on the gate, and we went to the tavern instead.”

Fair enough. To the left of the gate was the brewery’s “official” tavern. It seemed appropriately upscale, at least in contrast to the next closest Pilsner Urquell outlet, located across the street, which was on the ground floor of a 1920s-era structure, smaller and shabbier, and yet alluring in a counter-intuitive way.

We opted for the well-appointed “official” brewery tap first, probably because the odors of pork and dumplings were leaking through the windows and clinging to our clothes, and we needed to eat immediately. Once inside, we admired the traditional wooden interior and beautiful windows*.

Drinking, dining and pervasive deliciousness was the result, and there even was an inadvertent floor show, showcasing the intoxicated antics of a visiting delegation of North Koreans, who were having far too much fun in a communist country that actually had drinkable beer.

It transpired that using the restroom meant passing the Czech restaurant-standard coat check desk. There were few coats to check in high summer, but full employment meant staffing it irrespective of the need, and at one point when the two of us walked past, the coat check attendant addressed us.

In a low voice, she asked if we were American, and we nodded assent. She beamed, and proceeded to tell us in passable English that she still remembered the liberation of Plzeň by General Patton’s 3rd Army at the close of WWII.

The 40th anniversary had been only two years before our visit, and she cheerfully recounted the appearance in 1985 of a handful of Patton’s elderly former soldiers for the city’s commemorative event.

Recall that in late 1945, American troops withdrew from Czechoslovakia, which had been determined to fall within the Soviet sphere of influence, which of course fell behind the Iron Curtain, as coined by Winston Churchill. 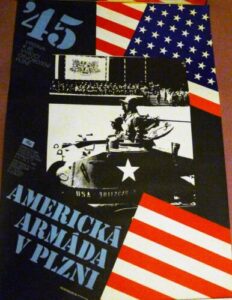 The coat check woman preferred to remember how nice the American G.I.s had been, helping to rebuild Plzeň in the months before being withdrawn, and frequently gifting her and other children with chocolate bars.

Before we left the premises, she surreptitiously pressed coasters and postcards into our hands, as if to pay back those favors from so long ago.

It was sincerely moving, and I’ve never forgotten her hospitality.

Now it was time to visit the dive bar, and as we emerged from the restaurant, things were heating up across the way. Sadly, when I returned to Plzeň in 1989, the entire building was gone, demolished for a street widening project. Looking closely at the photo from 1987, there seem to be few signs of life in the upper three floors, so perhaps the tavern’s demise was a done deal even as we were drinking there. 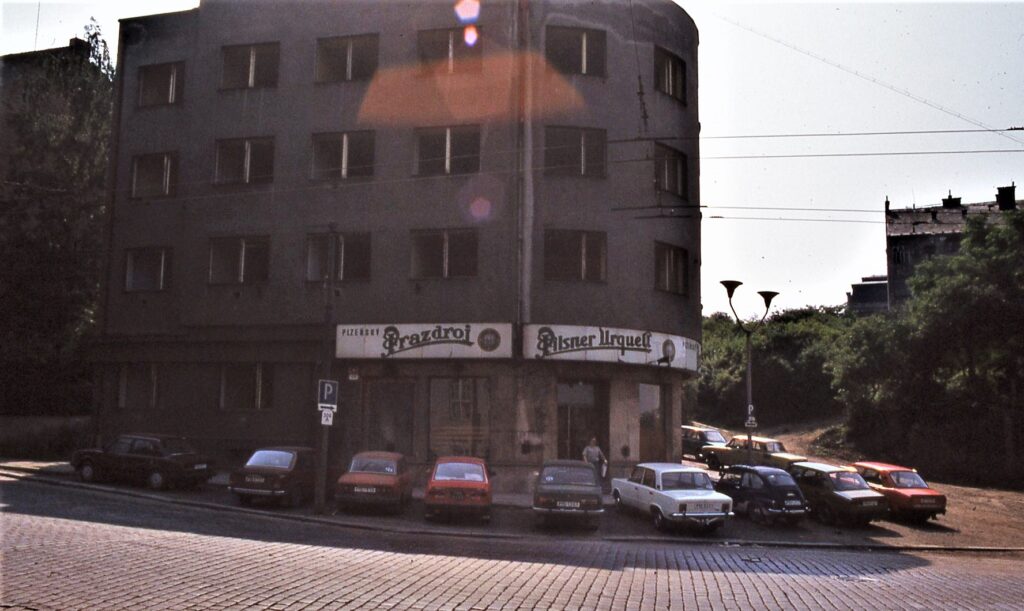 At any rate, the pub with no name was a delight, and the regular crowd was shuffling in. When Frantisek and the lads arrived, the party started.

He was a cabbie playing hooky, rejecting an afternoon’s fares so he could drive himself and four (five?) of his finest friends from one tavern to the next. As long as his communism-pretend credentials were in order, it probably wouldn’t matter whether he worked or not, and if you’re not working, why not have a few beers on a lovely summer’s day?

They spoke no English and we spoke no Czech. Some German words could be shared. The longer we remained, the easier it got. Seasoned drinkers understand that communication becomes immeasurably simpler once all participants have reached the stage of “universal second beer language,” wherein thoughts and concepts expressed in otherwise indecipherable tongues suddenly make perfect sense.

Eventually Franta reckoned we needed an education in the merits of Czech rum.

Tuzemák, formerly called Tuzemský rum (English: domestic rum), is a term for a traditional Czech distilled beverage. It is a substitute good (ersatz) for true rum which is produced from sugarcane mainly in the Caribbean and Latin America. Since the 19th century, Tuzemák became one of the most popular spirits in the Czech lands.

Tuzemský is produced from potatoes or sugar beets, diluted and flavoured by various rum essences. In the 19th century similar substitutes were produced throughout the crown lands of the Austro-Hungarian monarchy, which had no access to tropical colonies; they were named Inländer-Rum (like Stroh in Austria, today produced from sugarcane molasses and therefore a genuine spiced rum), Domači or Čajni (Croatia) etc.

In 1987, it was simply called rum, and the less said, the better. After a couple belts of it, I undertook a laborious examination of the time, and came to a reckoning of my own: we needed to get back to Prague. As we departed, so did Franta and the gang, motoring toward the next pub on their taxi crawl.

Next day, we caught the train to Munich, and a meticulously pre-planned meet ‘n’ greet with our friend Bob and my cousin Don. In the coming years, I returned to Plzeň several times and managed to make three Pilsner Urquell brewery tours, and in 1993 put the beer on tap at the Public House, where it has remained a staple for the most part ever since, and now also pours at Pints&union.

It will come as no surprise that a beer as fabled as Pilsner Urquell inevitably is subject to a certain degree of mythologizing. I try to avoid hyperbole, but in the case of this golden, hop-accented lager, the praise remains justified.

Next: A clash of titans (with Elephant Beer) in Copenhagen, 1987.

* The restaurant has since been relocated to the former brewery maltings, and substantially enlarged.

An ongoing chronicle of what I can remember after 40 years...