When Barrie and I arrived in Czechoslovakia, it became the sixth East Bloc country I’d visited in 1987. Recall that we first met in Moscow for a guided tour that took us to Poland, and before that, I’d allotted travel time in May and June to Hungary, Bulgaria and Yugoslavia.

From the perspective of beer and brewing, lagers of Germanic descent comprised the standard options available throughout these areas, and these beers were overwhelmingly golden.

Communism was the prevailing political system, and it was entirely red.

And, a pervasive green was the color of my face when I experienced my very first Balkan squat toilet.

As a primitive precursor of future internet beer lists, I actually enumerated in writing the different beers I drank in 1987. The stated goal at the outset was to drink at least one different brand of beer each day, and I achieved this: 120-odd days, and 130-plus brands.

There’s a copy of the list somewhere downstairs in a banker’s box, although it seems senseless to dig for it, as there’d be only a handful of “dark” lagers and probably fewer ales.

Not unexpectedly, the beer drinking experiences proved to be more memorable and influential than the beer list.

There were numerous, venerable breweries in these locales, as with Union, Dreher and Aldaris in Ljubljana, Budapest and Riga, respectively. However, wherever I wandered in the East Bloc, there was an almost mystical reverence attached to beer from Czechoslovakia. People swore by their own city’s beer, of course.

Once I was looking at half-liter bottles of beer on a store shelf in Hungary, trying to decide, and a man sidled up and asked me, “Sprechen Sie Deutsch?” Nein, I replied, “I’m American.” He switched to passable English and provided guidance (paraphrased): “If Czech beer is available, ALWAYS buy it.”

To understand what it was like for a beer drinker to be traveling in a place like Czechoslovakia in 1987, begin by forgetting almost everything you’ve learned during the contemporary “craft” beer era.

In 2022, there are more than 9,000 breweries in the Unites States. 35 years ago, the number was 150, with roughly half of them coming into existence during the preceding decade. There weren’t 100 breweries in the whole country when I began attending college in 1978.

Conversely, in 1987 there were around 70 breweries in Czechoslovakia alone, a nation with 15,000,000 inhabitants, as opposed to 242,000,000 at the time in America. The per capita rate of beer consumption was far higher in Czechoslovakia, especially in the Czech lands of Bohemia and Moravia, although a bit less in easternmost Slovakia.

Beer culture was omnipresent and pervasive in Czechoslovakia, although limited stylistically—except that in 1987, we had yet to be conditioned to expect dozens of choices whenever going out for a couple of pints.

In Czechoslovakia, one happily “endured” numerous hop-accented golden variations on a theme of Pilsner Urquell. Notably, no other Czechoslovak brand referred to itself as “Pilsner” – this honor and appellation was reserved for the Plzen-brewed original – and yet the majority of them were similar, brewed to varying strengths.

In 1988 many Czech breweries were almost unchanged from the 1930’s. While productivity may have been low, there was no argument about the quality of the beers brewed. Open fermenters, long lagering times and absence of pasteurisation produced distinctive and flavoursome beers. No other country came even vaguely close to the general high standard of Czech lager. It was impossible to find bad beer.

Some breweries had national distribution, like Pilsner Urquell, Budvar, Staropramen, Gambrinus, Velkopopovicky Kozel and Radegast. These invariably were identified by degrees of gravity (commonly 12, 11 and 10, in descending order of alcoholic strength).

There also were some dark lagers, which tended to be of lower gravity and exhibiting a malty sweetness, as well as the occasional “black” lager of better balance and increased potency (13 or even 14 degrees). Even an old-fashioned bottom-fermented porter might pop up out of nowhere to surprise you. The Martin brewery in Slovakia made one, and it was wonderful.

Still, drinking beer in Czechoslovakia in 1987 meant sampling the same basic style brewed by different breweries. The fun part was roaming cities like Prague in search of the pub on the back street that served one you hadn’t seen previously.

Barrie and I patronized several of the more famous Prague taverns during our short stay in 1987: U Dvou Koček, U Pinkasů and U Fleků among them. The latter was (and remains) a brewpub, and in case you were wondering, it helps to know that in Czech, “U” somewhat surreally approximates “at” and is incorporated as a pub name prefix.

Communism was all about investing in selected economic goals, and disinvesting in others. As Pattinson observes, this actually had the curious effect of helping to maintain overall beer quality in Czechoslovakia, in the sense that in the absence of abundant capital for modernization, the older and slower ways persisted.

“Old school” was no cliché in 1987. Rather, it was working brewery life, every single day. Later, after the Velvet Revolution, as western corporations snatched up Czechoslovak breweries, there was a rush to modernize and standardize. Individuality and character were the chief casualties.

As Communist economics pertained to taverns and watering holes in 1987, the situation was mixed. Even the famous, iconic beer shrines reflected the realities of their time, and varied in terms of repair. In most cases, one noticed lots of wood, plaster and cigarette smoke. The vibe tended to be relaxed and quiet, without loud music or boorish voices. Toilets were usually grimy, but beer prices were uniformly inexpensive almost everywhere you went.

Granted, waiters were prone to padding checks with hidden cover charges, but the prices were so low you seldom noticed – and as noted above, the beer was unfailingly wonderful.

At some point during our stay, we briefly encountered an establishment that subsequently became a great personal favorite of mine, the Automat Koruna (1931 – 199_?)

After three weeks in Prague in 1989, the workers at the Koruna probably knew me by sight, if not by name.

Prague’s famous Wenceslas Square (Václavské náměstí) was the city’s original horse market, and isn’t a square at all.

It’s a boulevard, originating atop a gentle rise in front of the Czech National Museum, then descending to where the Old Town begins. At this intersection (Václavské náměstí 1), just a few feet from the subway stop, is a sizeable Art Nouveau building called the Koruna Palace, which opened in 1914. 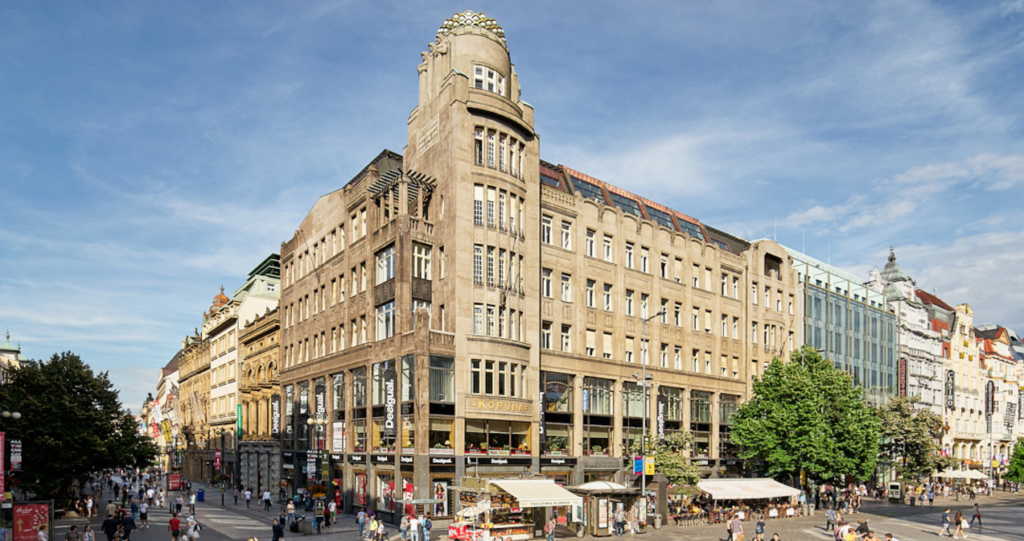 Strictly speaking, an “automat” is a vending machine. The first such automat for food and drink was introduced in Berlin in 1895. From what I can tell, the Automat Koruna followed suit from its inception in 1931, though the Koruna Palace was such a large building that there were other food service businesses inside it. It’s never been clear to me where originally one of them ended, and the next began.

Whatever the ultimate disposition of the vending machines and the timing of the conversion, by the time we experienced the Automat Koruna (sometimes referred to as the Buffet Koruna), it was a high volume, self-service, cafeteria-style eatery with multiple counters, where customers could buy nibbles, full meals, sweets, coffee and the Koruna’s famous strawberry milkshakes.

It had beer, too. A great many customers never ingested a single non-liquid calorie at the Automat Koruna. 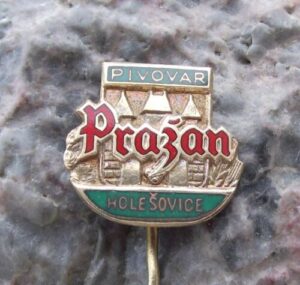 You told the cashier what you wanted and paid, to be given a receipt, then joined a customarily long line, handing the receipt to one of the white-smocked beer pourers. The reward was a cool half-liter of Pražan, a pilsner-style lager brewed a few miles away in Holešovice district of Prague.*

You consumed your Pražan and also ate while standing at a stainless steel table. There may have been chairs at the Automat Koruna, but if so, I can’t remember ever seeing one, and at any rate, I didn’t need to sit. Crowds were a constant, and stand-up space sometimes at a premium.

The ambiance at Automat Koruna was urban, frenetic and often claustrophobic, but I loved it, and it was unmatched as a place to drink beer and people-watch during these latter communist years. The clientele reflected an indisputably egalitarian ideal, although for communism’s usual litany of all the wrong reasons.

Military men with medal-festooned chests jostled for space with long-haired students. Backpacking tourists and shop clerks stood side by side. Brown-suited functionaries left scraps on their plates, and the scruffier patrons scooped them up before the busser came to shift them away, pointing to an inconvenient fact contradicting the regime’s insistence that homelessness and poverty were non-existent.

Similarly, it was ill-advised to step away from your beer, because a hand would appear from nowhere in milliseconds to drain it.

Amazingly, these perfectly presentable stand-up, half-liter local draft beers were three to a dollar. Never before or after has cheap beer been this damn good. That fellow in Hungary? He was absolutely right.

Next: An eventful pilgrimage to Pilsen.

* According to the Interiors and Exteriors of the ČSSR blog, as translated into English, “the interior of the kitchens (at Automat Koruna) was lined with white tiles and equipped with stainless steel equipment, they had tanks for 120 hl of beer.” 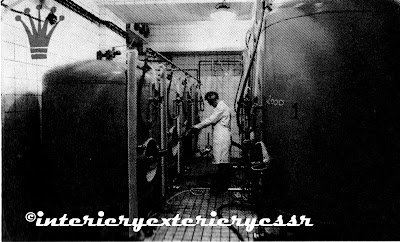 Given that 120 hectoliters works out to 3,168 American gallons, or 204 standard half-barrel kegs as we know them, yes, this is a colossal amount of beer, and storage in bulk makes perfect sense. It’s also easy for me to imagine the equivalent of 10 or more kegs being poured each day. Usually two barmen were on duty, and they seldom stopped filling mugs. And, finally, the old photos suggest there may have been a wider variety of beers on tap at one time, although when I was stopping in, there weren’t more than two (10- and 12-degree golden lagers).

Photo credits other than my own collection: Interior views of Automat Koruna here, exterior here. Both these web sites are worth a visit. The Pražan pin comes from somewhere on eBay.

An ongoing chronicle of what I can remember after 40 years...