One afternoon in August, 1987 an archaic device affixed to the wall started ringing. I lifted the plasticized receiver from its cradle, gently brushing against the numerical rotary dial.

(Recall that we lived in caves back then, brandishing big clubs to pursue brontosaurus steaks.)

The caller was my old pal TR, asking about my recently concluded second journey to Europe. We chatted about the trip, and then he suggested we continue the conversation over lunch at a new spot on Grant Line Road in New Albany—well, not exactly new, but recently changed. A moribund Noble Roman’s Pizza outlet had different management, and it was now a local eatery dubbed Sportstime Pizza.

I knew that TR and his father enjoyed bonding over meals at area restaurants, and could always be relied upon to provide informative reviews during this word-of-mouth era preceding internet ubiquity, so a couple of days later we met at Sportstime for pizza and soft drinks, as I couldn’t quite bring myself to consume draft Budweiser so soon after returning from Europe.

Verily, when people go to restaurants they tend to order their favorite meals, maybe hang out and socialize for a while, eventually pay the tab, and finally leave. Hopefully they’re sated and satisfied, and the result is a fair transaction for everyone involved, customer as well as the establishment.

For me, even if I didn’t know it at the time, this one brief experience of eating lunch at Sportstime with TR completely altered the trajectory of my entire life. That’s one hell of an impact for an ordinary pizza joint in forever somnolent New Albany, proving yet again that serendipity rules the world.

In the years to follow, life would start coming at me a great deal faster than before. I resisted growing up, and yet it happened anyway. In retrospect, those four months in Europe in 1987 retain a rarified glow as the culmination of my consciousness up to that point, and an indication of where I was headed next.

As such, I’ll be devoting several chapters of the “40 Years in Beer” chronicle to Euro ’87, beginning with this one. 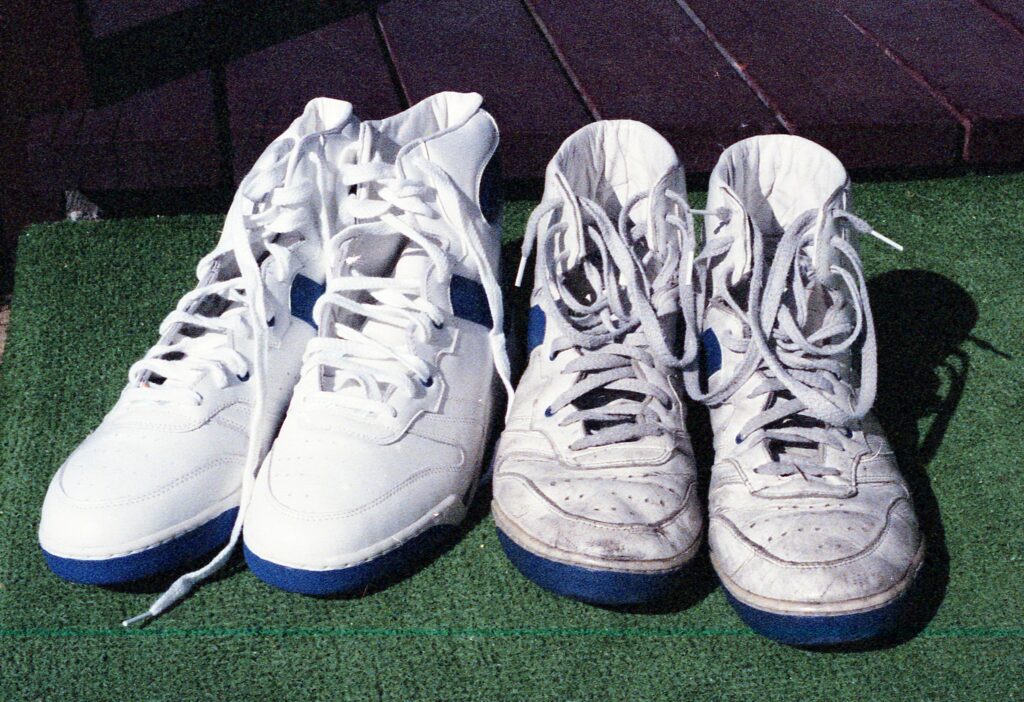 As 1985 gave way to 1986, I’d reformatted my life around the stated prerequisite of traveling to Europe at least every other year. I worked my usual semi-predictable jobs, squirreled away money and feverishly planned. When the 1987 European summer came, it would be far more ambitious than the 1985 edition.

The journey began and ended in Brussels. Following a swing through Benelux to Switzerland and Vienna, I spent quality time in central Italy before crossing the socio-economic dividing line from Trieste into Yugoslavia, Bulgaria and Hungary.

In late June the centerpiece arrived when I linked up in Moscow with my childhood friend Barrie Ottersbach to join a group trip to Leningrad, Latvia and Lithuania (all in the USSR) and Warsaw, Poland.

Afterward we traveled together to Prague, paused, then pushed on to Munich to meet our friends Bob Gunn and Don Barry. Next came the Rhine Valley, Paris and the D-Day beaches with an ultimate destination of Ireland, which was reached via ferry.

Trip’s end found us in Copenhagen for a rendezvous with Kim Wiesener, the Danish tour leader we’d met in the USSR. We were introduced to his buddy Kim Andersen; they were two-thirds of what came to be known as the Three Danes of the Apocalypse (along with Allan Gamborg). A subsequent evening at the Elephant and Mouse pub remains one of the tallest trues stories ever told.

My beer education remained fragmentary in 1987, but the itinerary broadened stylistic terrain to include Belgian ales, Irish stouts and the periodic offbeat specialty, as with my first exposure to Kostritzer Schwarzbier, an East German black lager consumed in Budapest, of all places.

But golden lagers overwhelmingly comprised the selection of “local” beers almost everywhere I went. Although I’d gained a traveler’s seasoned confidence and was more willing than before to loosen up with a few beers in strange lands, the tradeoff was a worse exchange rate, which made places like Belgium, Switzerland and Austria more expensive.

The answer: Eastern Europe. It’s where my thirst for better beer and an accompanying yearning for learning collided.

My determination to transcend the Iron Curtain for a look-see dated to history classes at university, and my latent interest in those countries was rekindled with a vengeance. The fact that economic realities rendered many of them ridiculously inexpensive was merely a bonus; I’d have gone anyway.

The most famous East Bloc lager was Plzeňský Prazdroj, a world classic beer that we know by its German name, Pilsner Urquell. “Urk” played an outsized role in the travelogue in 1987, and so I’ll start the tale at the trip’s midway point and save the beer’s history for a later chapter.

As evening approached in Warsaw on July 12, Barrie and I stood alone in the shadow of the monstrous “Stalinist Gothic” skyscraper known as the Palace of Culture.

We’d been dazed by an afternoon of cheap Bulgarian cabernet and amazed to find Austrian-brewed Kaiser Bier at the Hotel Forum’s foreign currency bar. Now we were walking to the central train station to hop the sole overnight “express” to Czechoslovakia.

An ulterior motive from the start had been to pursue Pilsner Urquell to the beer’s sources in its native Bohemia, and now the promised land was close at hand. However, these were waning Communist times, and our jovial mood didn’t last very long.

Although essential documents were in order, including passports, train tickets and couchette reservation, we had neglected to pack food and drink for the ride. Unfortunately it was Sunday, all the stores were closed, and “non-stop” mini-marts were unknown in Communist Poland in 1987, as they’d yet to be written into the five-year plan.

Our backpacks bulged with Soviet black market booty, none of which was edible. Foraging for victuals in the immediate vicinity of the rail station’s platforms proved spotty; even with handfuls of colorful złoty, there was little to purchase except grainy chocolate bars and returnable bottles of imitation cola.

The final whistle blew. Barrie and I boarded hungry, and did the best we could to sleep in the stifling mid-summer heat. Twelve hours later the marathon rail crawl finally ground to a halt, and we stumbled bedraggled into Prague’s hlavní nádraží station, filthy, disoriented, and with our stomachs audibly growling.

Stashing our belongings at the baggage check, we departed the station and were treated to our first glimpses of Prague’s timeless majesty, as it shared terrain with then-current reality. Pausing in front of the museum at the top of the long, gentle rise of Wenceslas Square, against a backdrop of the old city sparkling in a bright morning sun, a taxi driver spotted us, sidled over, and asked if we’d like to change money.

Several minutes later, a room finding agency placed us for three nights in a budget friendly athletic club dormitory on the outskirts. It would be several hours before we could check into the room. Starving and parched, we were cast into the mysterious, gorgeous and crumbling urban area to fend for ourselves.

Exhilaration overcame fatigue as we ventured into the winding streets, over cobbled roadways and through strange arches. Soon, to our growing excitement, we found that the city boasted more than spires, spies, stucco and scaffolding – beer was all around us, and pubs were in abundance!

After two weeks in the Polish and Soviet lands, where vodka reigned supreme, we were at long last in Bohemia, the Euphrates of European lager brewing tradition, and the home of the original golden hoppy lager beer. We resolved to walk a bit more before finding a good place to enjoy a draft, preferably a Pilsner Urquell, Budvar or Staropramen.

Armed only with an inadequate tourist map, the hoofing commenced. We crossed the Vltava River on the famed Charles Bridge, ascended Castle Hill, wandered down the other side, crossed the river again at a second bridge, and finally were devoured by the twisting alleyways that we knew somehow led back to Wenceslas Square. 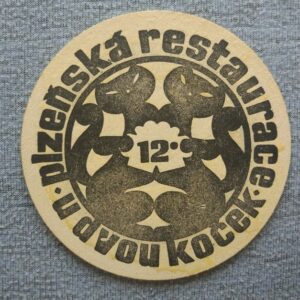 At length, having paused only briefly for scrumptious greasy sausages dispensed at a tiny street-side window, we glimpsed the familiar green script of “Prazdroj” adorning the façade of a faded, orange-painted building.

Those final steps were the hardest. We passed through the stout wooden doors of U Dvou Koček (“At Two Cats”), where Pilsner Urquell 12-degree was the house beer, the daily beer, and in fact, the only beer available.

Blissfully unaware of accepted protocol, we slumped heavily into wooden benches in an interior hallway, and our beleaguered senses slowly were revived by the cozy, smoky, conspiratorial ambiance of the adjacent main room, where clusters of Czech workers, students, soldiers and officials sat conversing.

Platters of pork and dumplings sat before many of the customers, all of whom seemed to be cradling indescribably lovely mugs of rich golden beer – and make no mistake, they were rectangular glass mugs, not the more stylish half-liter glasses that supplanted them not long afterward. It was dreamlike and seemed too good to be true, except that alarmingly, the waiters completely ignored us.

This called for direct action.

I went to the long, imposing counter where a brawny, mustachioed man stood next to a pair of matching taps, both pouring the exact same nectar, by a wheeled cart filled with clean mugs. Mustering my courage, I flashed four fingers and muttered, “Pivo, pro-seem,” having miraculously recalled the proper words without stealing a glance at the guidebook buried somewhere in my day pack.

He looked me over quite sternly, then nodded, smiled, and relieved me of roughly $2.00 while pushing four half-liter drafts across the slick countertop. Beaming, I duly conveyed them to our landing spot.

The liquid was cool, not ice-cold; frozen beer only numbs the palate, and although appropriate for Hamm’s, it certainly isn’t necessary for anything as grand as Urquell.

The noble hop aroma was evident and enticing, fighting through the billowing white head to reach my nose even at arm’s length. Everything about the beer itself and the venue in which it was about to be consumed spoke of consistency, respect, tradition, and the sheer joy that one feels from thinking, feeling and understanding the best things in life.

I’ll never forget this moment of beer ecstasy, which is incapable of being defined according to the number of calories ingested or the volume of advertising revenue expended.

There would be many such moments in the years and expeditions yet to come, but every now and then the first time really is the finest.

Next: East Bloc beers and the Automat Koruna in Prague.