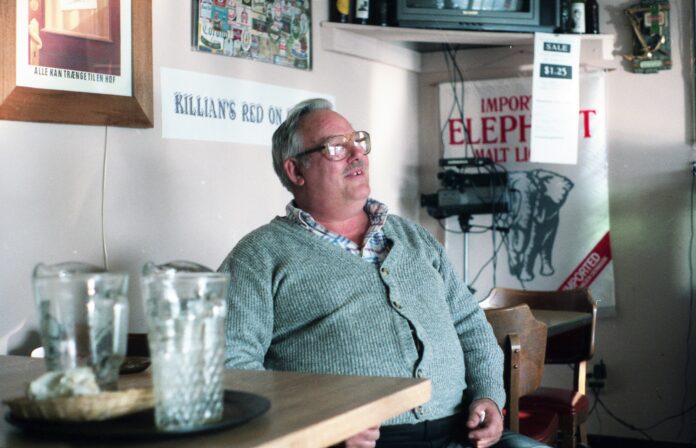 His name used to come up often during beer-side conversations at the Public House, but now he’s been gone for 22 years, spirited away by heart disease in March of 2000 at the ridiculously young age of 60.

These days only the older bar regulars might recall meeting him. The problem is that too many of these patrons are no longer with us, either.

I found myself thinking about Max after mentioning his name amid a consideration of folkways, foodways and beerways. If a high resolution image can be found, I’d love to honor his memory with a framed photo somewhere in Pints & Union.

Knowing that on widely scattered occasions, I can be a stubborn cuss when compelled to plant my heels in the primordial muck of our Falls of the Ohio flood plain and defend the proposition that we can’t know where we’re going without some idea of where we’ve been, it strikes me as vital that Max’s life and work be remembered.

Consequently, it is my ongoing pleasure to continue writing and talking about Max — just so everyone else doesn’t forget, because trust me, I never will.

Max was a full-time, professional bartender, best known for his quarter-century stint at the legendary Hasenour’s Restaurant at Barret & Oak in Louisville, which was followed by a coda of sorts at the Seelbach Hotel downtown, where his father had tended bar many years before.

I seem to recall an interlude between gigs at Hasenour’s, during which Max started a small engine repair business or something similar. He seemed to be good at it, but unfulfilled. Max was a “people person,” and as jovial and friendly a man as you’d ever hope to meet. He seldom was seen in public without a broad smile on his face, and maintained a vast repertoire of ice-breaking jokes and tales.

Max introduced himself to me one evening in the early 1980s. He came into Scoreboard Liquors, proceeded to the bourbon section and stood intently for the longest time, studying the labels, not that we had a large selection in the first place.

When Max finally asked me a question about one of them, I readily conceded my ignorance as the nominal beer guy who still was learning the ropes about liquor and wine. This delighted him, and henceforth he was the teacher and I was the pupil, which probably was his intention from the very start.

With the advent of Sportstime Pizza in 1987, Max would bring his son for afternoon food ‘n’ video game visits, and when the Fermenters of Special Southern Indiana Libations Society (FOSSILS — our local homebrewing and beer appreciation club) started in 1990, he joined in spite of drinking very little beer.

He didn’t make it to very many FOSSILS meetings owing to his work schedule, but one that he did manage to attend is fondly remembered. It was in 1993 or 1994, when the late Virgil Hosier, bottling line foreman at Ackerman’s, New Albany’s last operational brewery prior to NABC (it closed in 1935), came to talk about his job. Virgil was 83 at the time, and passed away shortly thereafter.

Max had the foresight to bring a cassette tape recorder, and the recording of Virgil’s talk was transcribed for inclusion in Conrad Selle’s and Peter Guetig’s Louisville Breweries book, where it survives for posterity, thanks entirely to Max.

It’s appropriate that this memorable contribution to FOSSILS lore pertained to history, for Max was a diligent member of Louisville’s Filson Club. He was a collector of books about beverage alcohol in general and Kentucky bourbon in particular, and served as a walking repository of local legend and lore. All you had to do was ask, and off he’d go.

He loved teaching and telling stories. I’d like to think I was paying attention, and taking notes.

After a long and gradual decline, Hasenour’s went out of business in 1996, and Max moved to the Seelbach for the final, all too brief chapter in his professional life.

Interestingly, in the twilight of Max’s career, there seems to have been a dawning awareness on the part of observers, including many in the Louisville media, that he represented something fast disappearing: Skill and excellence in the venerable art of bartending, practiced by a true craftsman for whom tending bar was not a temporary stop on the way to something better, but a respectable lifetime pursuit of its own.

Of course, today’s professional mixologists are an amazing breed, and positively molecular in their approach. I mean no disrespect to them with my comparisons, and obviously, any references to “classicism” suggest an inescapable chronology, which is to say that Max certifiably was an old-school practitioner.

In his later years, Max was delighted to be featured in more than one Louisville Courier-Journal article on drinks, and for the very good reason that he knew the liquors and time-tested recipes, and he did them up right.*

In the most positive of ways, Max was a human time warp. He did not indulge in the briefly embarrassing historical epoch of Tom Cruise-inspired “extreme” routines of bottle spinning and citrus juggling. Rather, the fundamental things applied, and significantly, not only with the theory and practice of cocktails.

A bar tended by Max was kept clean and stocked — not just with alcohols and mixers, but with any item that he felt his customers might need: A needle and thread, toiletries, shoe polish, spare neckties and road maps. He viewed himself adamantly as a concierge, whether within the confines of his workplace or pertaining to the city at large.

After all, we’re speaking of the final period in history before the coming of smart phones and personal electronic devices, and accordingly, Max did not rely upon cheap, abundant electricity; his index card file was literal and analog, upon which were written the names of customers, their references, spouses, children, birthdays and anniversaries.

If you came to Hasenour’s once a year for Derby, Max knew who you were and what you liked, and if for some reason the data eluded him, it was under the bar, at his fingertips.

In every sense of the phrase, Max was a pro’s pro, and he remained one as the bar business inevitably began to reflect the assembly-line prerequisites of our modern consumer economy, eschewing its slower-paced, traditional role as restful sanctuary for an increasingly frenetic place in the cookie-cutter service sector.

So it was that Max Allen was the serene, friendly, efficient, helpful face behind the bar, but not just any bar. His vocational milieu was the imperial “high street” American restaurant bar of the post-war zenith, an era originally framed in limitless possibility, now draped in increasingly funereal sepia.

In truth, the salad days were over before I ever encountered Max at the package store. He completed his tour with style and distinction. Perhaps the rest of us are just playing out the string.

Rest in peace, my friend.

Max would be having too much fun in this shiny new hyper-bourbonism age, without an iPhone in sight, and not a single trace of misplaced bullshit in those cocktails.

* In 2008, Max and other Louisville bartenders of his generation were the subject of an oral history project conducted by Southern Foodways, to which I contributed remembrances.

Photo credit: My collection, 1992, at the Public House for a FOSSILS meeting.