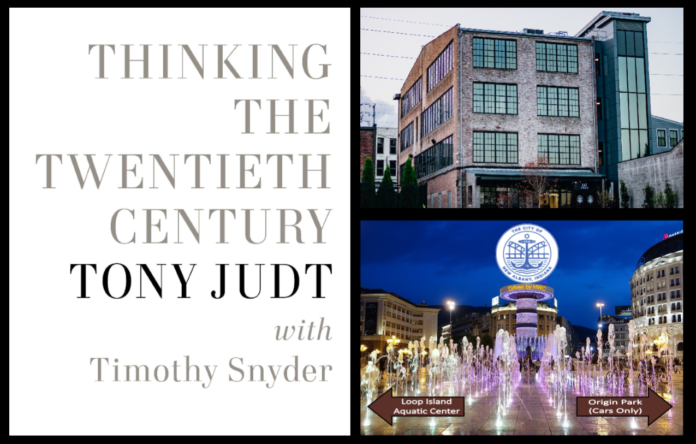 Originally written and published at NA Confidential on October 30, 2014.

ON THE AVENUES: Does New Albany even have an intellectual history?

The last time I can recall dressing up for Halloween was in 1986.

It was the year after my first trip to the Soviet Union, where I’d bought a top quality ushanka (a furry cap with ear flaps) for $25 at a hard currency shop in Leningrad.

As a regular customer of the old Sam’s Tavern, as opposed to the newer generation “Food & Spirits” moniker, my curiosity was piqued by a Halloween costume contest at the bar, but why waste precious drinking time on creative wardrobe when a pair of work boots and the ushanka perched atop my head announced my participation as a Bolshevik?

Shrug. It was good for second place.

After all, on yet another pagan-sourced holiday excuse to flaunt base capitalist greed and excess, one ostensibly devoted to ghosts and ghouls, my posing as a communist bogeyman seemed perfectly fitting. Joe Stalin was a failed seminary student, and his paranoiac, murderous police state has come to exemplify fear, loathing and the “reality” of Marxism as quasi-religious doctrine.

However, as the late historian Tony Judt and his co-writer Timothy Snyder point out in their 2012 book, Thinking the Twentieth Century, at least Marxism-cum-communism remains an actual doctrine, or system of thought and ideas. It’s more than can be said about fascism during its 20th century heyday, because there were no intellectual underpinnings of fascism, which in essence was (and remains) a cult of pure, unadulterated power.

Power. Not unlike a Mitch McConnell television ad, as financed by far-off political money aggregators. Our contemporary capitalist American era, a time dominated by the likes of fracking, the Koch brothers and Wal-Mart, bears a good deal more similarity to fascism than communism, the imagined excesses of managed health care and locale of Barack Obama’s birth certificate notwithstanding.

It’s why my brewing machines are calibrated to “kill” fascists, not communists. I’m for capitalism with a human face, although I’m afraid it may be too late for that.

There’ll be an election next week.

Why do ordinary Americans insist on vote against their own best interests by casting their ballots for Republicans? Why do they support the crippled and unresponsive “two party system” by voting at all? As the 1% garners an ever higher share of the wealth, what keeps 99% of Americans off the streets, demanding change?

Inelegantly paraphrased, Judt offers a theory from self-delusion to explain this phenomenon.

Democracy depends on an informed and responsive citizenry, but generations of consumer-oriented, materialistic capitalism have resulted in large numbers of humans existing in a state of non-responsiveness, unable to act in their own best interests, primarily because they remain besotted, dazzled and duped by the convenient myth of America as a place of opportunity, where any lowly schmuck can get rich by working hard.

In much the same way as science contradicts religious superstition, incontrovertible economic statistics plainly disprove the notion that most of us have any chance whatever of becoming a card-carrying member of the 1%. We’ll be lucky if we die out of debt.

But superstition perseveres, and according to Judt, Americans insist on voting to maintain the conditions of their own impoverishment precisely because they retain the childlike faith that some sweet day, when they’re finally as rich as Mitt Romney, they’ll receive the rewards for voting like Mitt Romney, even when they were poor.

And then there is white male anger, which is a topic for another day.

Judt’s and Snyder’s book takes the form of several loosely themed conversations, as transcribed by Snyder. At the time of the book’s preparation, Judt was immobilized by ALS, the disease that subsequently killed him. As with Stephen Hawking, Judt’s mind was mightily sharp, and the two historians tackle topics beneath an umbrella term many New Albanians might find frightening, pretentious or both: The “intellectual history” of the past century.

In short, how did ideas and systems of thought play a role in European society, art, politics and history during this era? I’ve already mentioned some ‘isms,” as in capitalism, communism and fascism. What about socialism? How is it that I persist in identifying my core political persuasion as resembling European-style Social Democracy rather than conforming to an American version of Democrat or Republican?

There are numerous other examples, as in the case of Zionism. What is the pathway of a Jewish separatist movement rooted in fin de siècle Vienna, as it leads toward a post-Holocaust consolidation of the modern Israeli state? How did rural and urban Jewish societies in Europe differ in the first place? And so on.

Reading and thinking about this wonderful overview of intellectual history have been tremendously exciting for me. I needed a stimulating “break” after so many months of concentration on specific matters of local, personal and business interest – from lane widths to commercial kitchens, from the death of a housecat to Silvercrest, and from 800-lb gorillas to shrubbery.

Judt and Snyder’s engaging scholarship has helped bring me back, full circle, to the time when I was advised to register for an Introduction to Philosophy class only because (a) it’s easy, and (b) I’d need humanities credits, anyway. But I was abruptly awakened by a vibrant world of thoughts and ideas, which high school simply didn’t prepare me to fathom or discover. The book reminds me of what changed my life so very long ago … and continues to do so today.

Yes, I persist in a belief that certain of these ideas and doctrines, some more so than others, still preface daily living in a place like New Albany. Ideas and words matter, as in a comment recently passed along to me:

“Before we talk about transportation we have to ask what city we want and how we want to live.”

I want to live thinking. Without it, my quality of life suffers.

My Beers in the GDR, Part Three: Yes, there was lots...