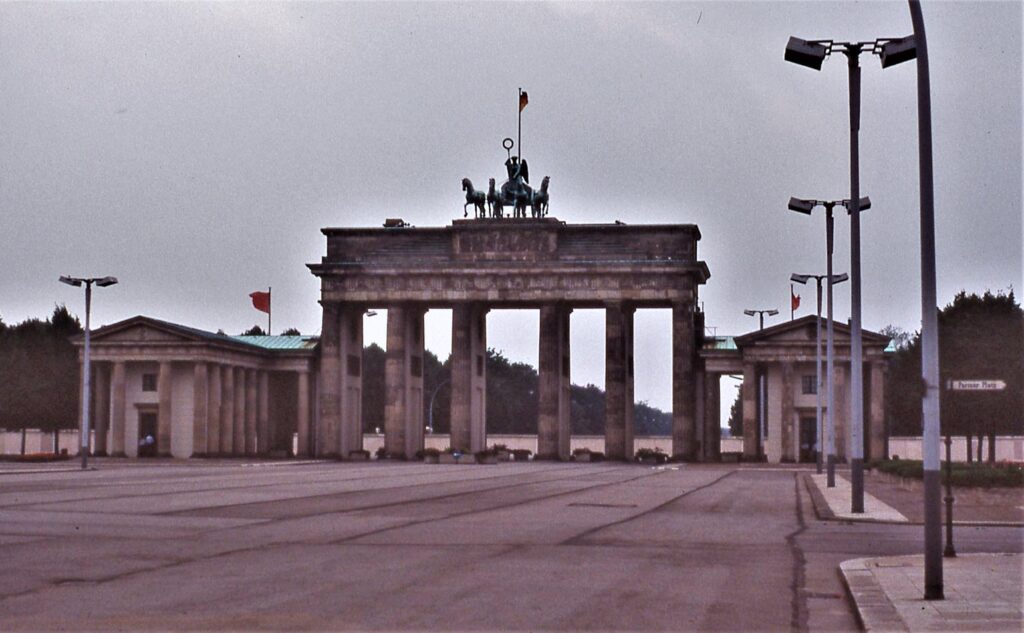 In 1989 I spent the first three weeks of August buffing and polishing V. I. Lenin’s shoes. The footwear belonged to a gargantuan statue prominently located at the entrance to the Volkspark Friedrichshain in East Berlin, capital of the German Democratic Republic, henceforth to be referred to here as East Germany or the GDR.

My presence during the GDR’s final socialist summer owed to a stubborn determination to be different from the rest of the backpacking tourists, and to spend as much time as possible in the East Bloc during my months-long European sojourn. I’d become fascinated with the countries behind the Iron Curtain, and as a contrarian, political affiliation was no consideration.

As you might expect, the notoriously hardline GDR was little interested in budget travelers, backpackers, hippies, punk rockers and other forms of decadent Western life, even if the politburo desired the “hard” western currency we carried in our money belts. Prepayment for expensive hotel rooms and guided package tours was the custom for those seeking to visit East Germany.

The question for me was this: How to spend time in the GDR without breaking the bank?

The unexpectedly answer came from Vermont: Volunteers for Peace, which was, and remains, an organization dedicated to the principle of international volunteer exchanges between all willing nations, and generally speaking, among people of all ages.

During the Cold War, VFP provided numerous opportunities to evade the restrictive entry requirements outlined above in return for a modest registration fee and two or three weeks of volunteer labor toward a specified project, which might be assisting at an archeological site, or helping rebuild a house for use as a daycare center, or agricultural work.

For the GDR, cooperation in such comparatively tiny exchanges meant international brownie points. For me, the problem was solved. A $100 registration fee was mailed to VFP, the requisite visa paperwork completed, and the GDR was penciled into a summer’s itinerary that included the month of June in Czechoslovakia and three July weeks in Moscow dedicated to studying the Russian language—although as it turned out, it was a sojourn used primarily to roam the streets in search of glasnost-level excitement.

VFP’s western volunteers were scattered throughout the GDR. In East Berlin, we occupied living space some distance from the city center in a wooded park by a lake, accessible by an S-Bahn train (Plänterwald stop) only a short distance from Treptower Park, location of the grandiose Soviet WWII memorial.

Our home was a quasi-military compound not unlike the M*A*S*H encampment on television, constructed entirely from surplus East German equipment, with permanent showers, latrines, a commissary, a stage and a shop. We were divided eight to a co-ed tent, in which there were bunk beds, blankets and little else. 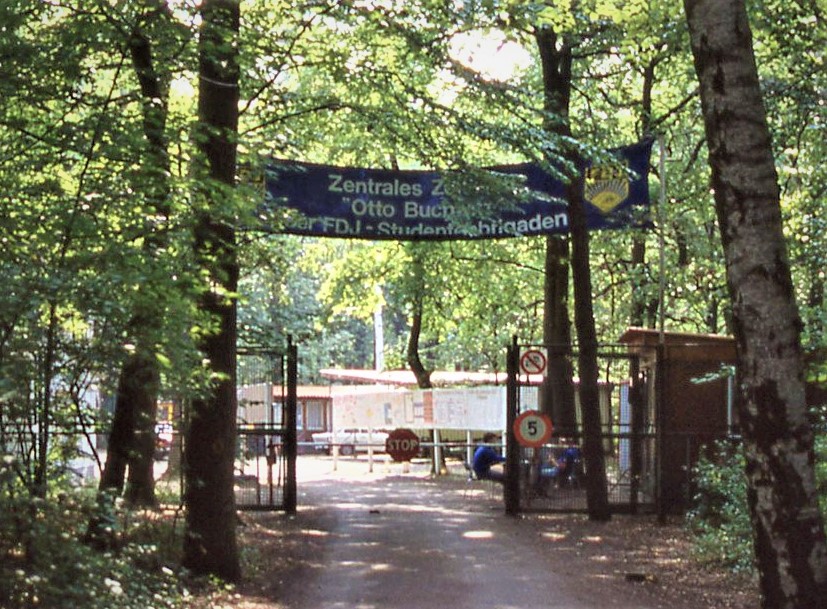 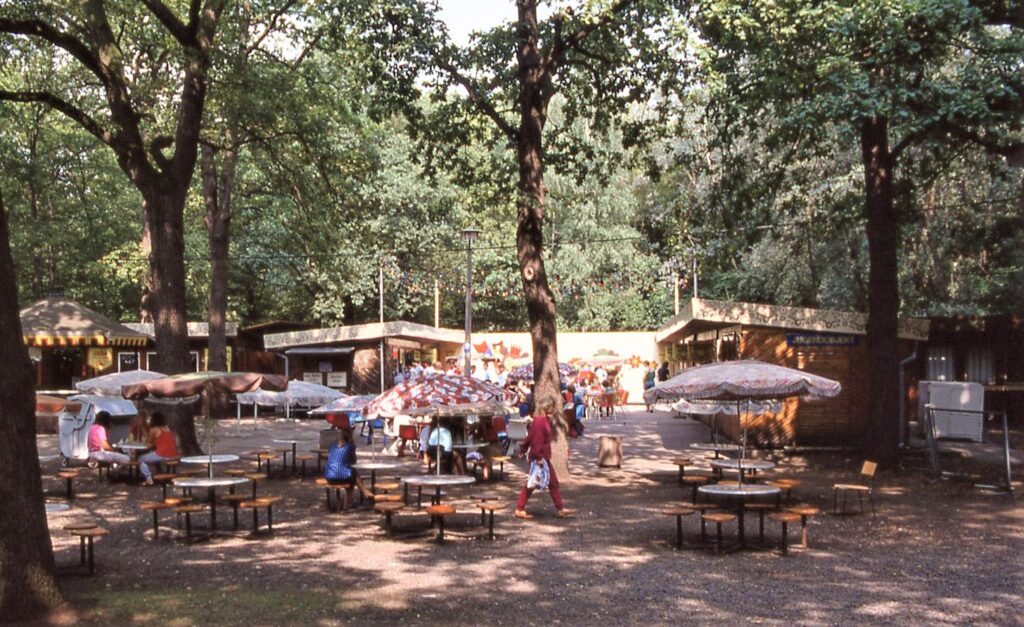 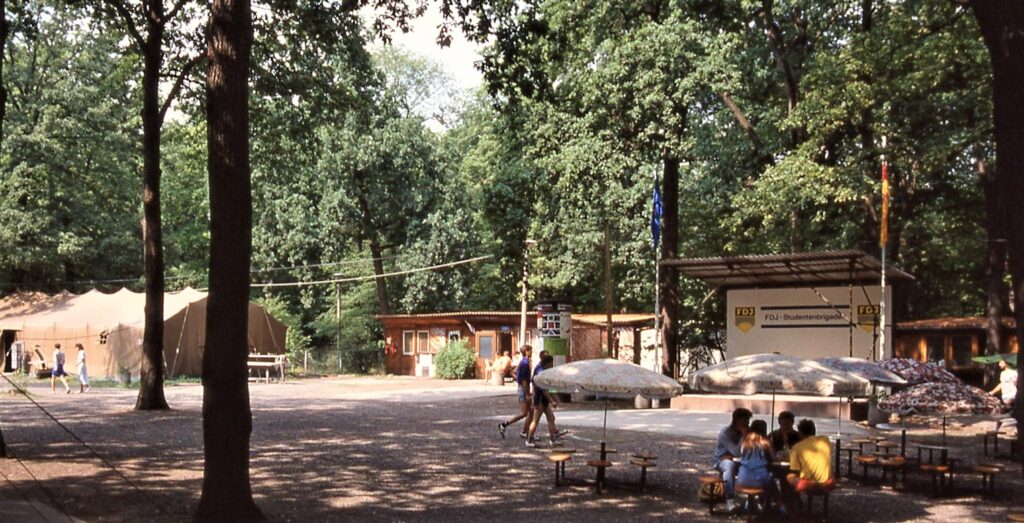 Roughly two-thirds of the campers were East German college students, members of the Frei Deutsche Jugend (FDJ), which was the official Communist youth organization and the surest pathway to career advancement. Each summer the FDJ “volunteered” its members to do socially useful work for the Fatherland.

I was among the roughly two hundred Westerners permitted to do the same, and naturally, we were deemed useful for propaganda purposes, although I must say that the ongoing exhaustion of the GDR’s founding ideals probably should have been evident from the absence of intensive propaganda instruction.

They seemed positively bored with the whole idea.

Once the volunteer brigade was billeted, we began an unforgettable three weeks of daily work. It wasn’t tremendously difficult, if occasionally dirty, and followed invariably by nightly beer drinking, both at the camp and various other pubs both near and far.

Each weekday morning at around 6:00 a.m., I’d rise from the top bunk, usually bleary-eyed and hung over, and watch the gals in our co-ed tent get dressed. After a necessarily restorative cool shower, it’d be off to the mess tent for rolls and coffee or tea. Some days I’d buy a bottle of local “Maracuja” soft drink for refreshment.

After that, it was a ten minute walk to the S-Bahn station, and then another 15 minutes aboard the train before the changing point. The second S-Bahn train deposited us somewhat near the job site, but too far to walk, so we always took a street car for the final half-mile.

Westerners like us worked alongside veteran employees of the East Berlin parks department, and I noticed early on that none of them seemed eager to abandon socialism for the enticements of the capitalist world. In short, they pretended to work, and their bosses pretended to pay them. To most, especially one named Wolfgang, this was a highly acceptable arrangement.

As an orientation of sorts prior to being handed our shovels, we boarded open-backed “pickup” trucks for an amazing ride down Karl-Marx-Allee, past the Stalinist architecture at Strausberger Platz, to a building where we were treated to a lecture by the volunteer brigade’s Communist party functionary, an older man with ludicrously black-dyed hair, about the importance of our labor.

The East German student assigned to translate the man’s utterances artfully mocked them aloud, safe in the knowledge that the functionary couldn’t speak a word of English.

Our translator’s greatest scorn was reserved for the bureaucrat’s admonition against consuming alcohol on the job. In fact, virtually all the East German students in attendance raised their eyebrows and giggled.

Soon enough, I found out why.

The job site in the Volkspark was actually quite pleasant. The park had been cleverly reclaimed atop two immense hillocks of bombed-out rubble from World War II, and served afterward as the de facto front yard for a nearby hospital that often disgorged armless and legless pensioners into the summer sun for their afternoon constitutionals.

Hidden away near the edge of the Volkspark was an Imbiss, a small sausage, snack and beer vending stand. Usually rows of wheelchairs were parked in front of it. For three weeks my own work group made punctual lunchtime visits to this secluded oasis for two or three half-liters of low-alcohol Berliner Weisse mit Schuss (Berlin’s sour wheat ale with a shot of non-alcoholic raspberry syrup added).

Sometimes we even ate lunch.

The Imbiss offered better ambiance than dining at the recommended groundskeepers’ commissary at the dilapidated main shop, which served the same basic meal of sausages and soup every single day, without the redemptive beer.

Perhaps somewhere in a declassified Stasi file there exists a yellowed photo of me with as a spade in one hand and a mug of raspberry infused Berliner Weisse in the other. If not, these will have to do.

In 2014 I returned to Berlin for the first time in 15 years with my wife Diana, and we found renewed life at the Imbiss, with a completely rebuilt commercial structure and a Berliner Weisse for old times’ sake. She had to listen to the stories all over again. What’s there now? 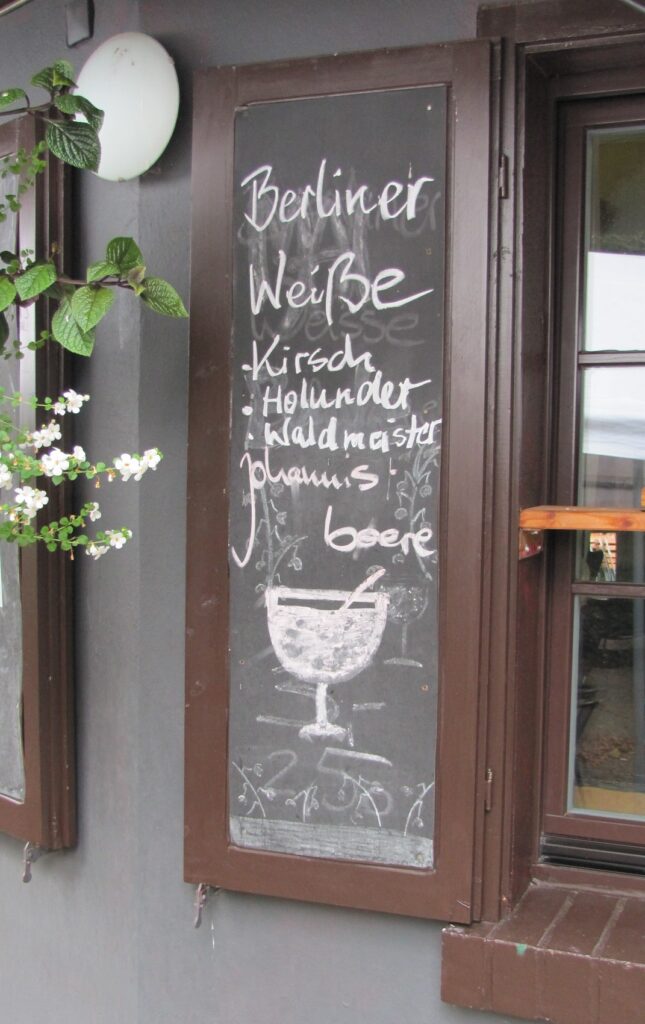 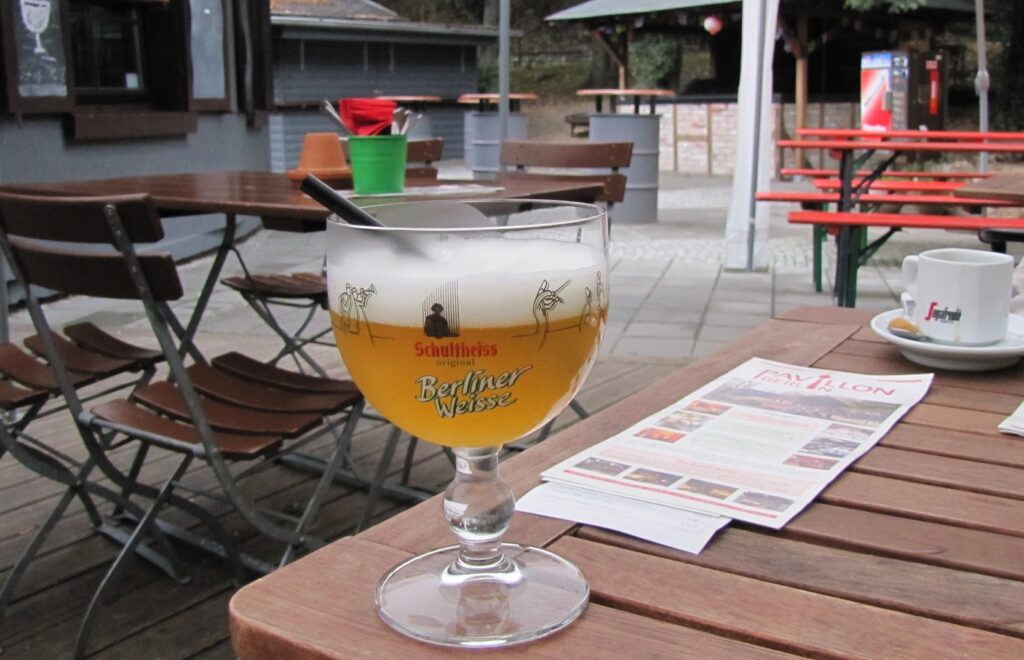 Next time: My Beers in the GDR, Part Two: Sharing a few Pilsners with a future war criminal.