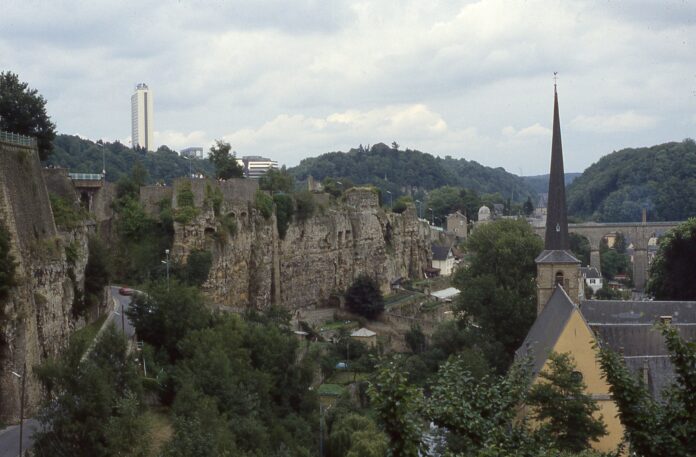 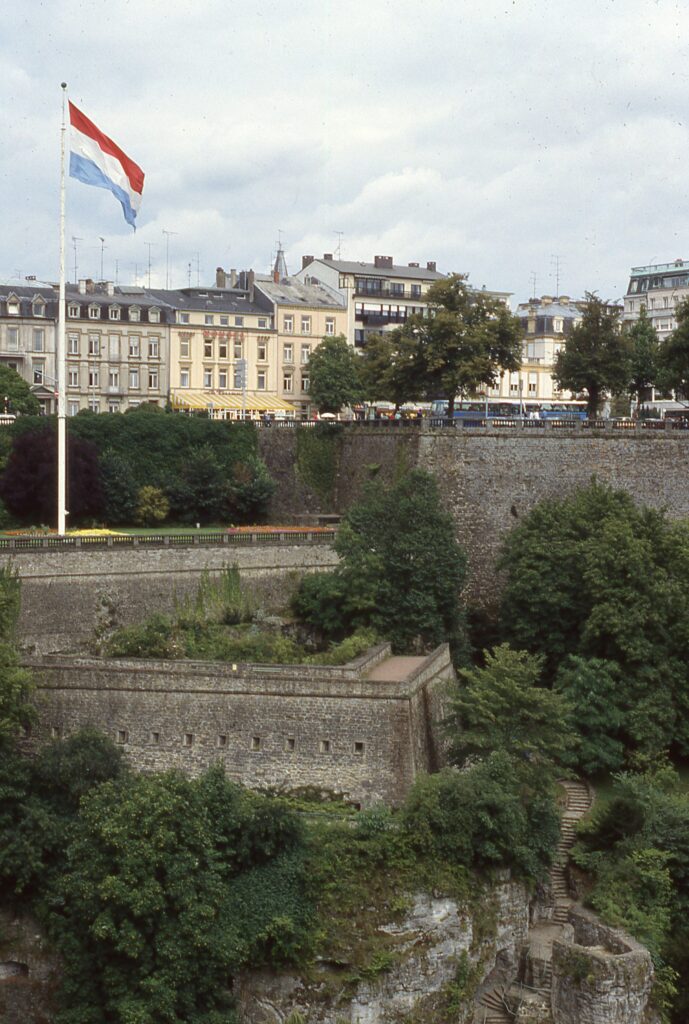 In retrospect, two relatively odd twists stand out about the inaugural European expedition in 1985.

First, given a lifelong compulsion to write, and considering the ample time I spent waiting for trains, sitting long hours inside them, resting in hostel common areas after a hard day’s touring, or just sitting on park benches watching the procession of life’s rich pageant—in short, with so many spare minutes to harness, I managed to commit little of that first trip to paper.

Only snippets and random observations survive, along with a fairly accurate day-to-day record of my progress. Why? Was it laziness? Probably the issue was the sheer sensory overload being too much for me to handle. When you’re a wide-eyed rube challenged by the simplest of daily tasks, not to mention utterly transfixed by scenes previously only dreamed about, it’s easy to lose the thread.

I know what you’re probably thinking, but it certainly wasn’t because of the volume of alcohol consumed, which brings me to a second observation.

To this day, people don’t believe me when I say that very little drinking took place abroad in 1985, at least compared with my default proclivities prior to departure. However, it is absolutely true.

In the beginning, there were stray beers here and there. The first, a can of Oranjeboom from the Netherlands, came on the fourth day aboard the ferry to Greece. In Athens, I drank an Amstel or Carlsberg with each evening meal.

I’d been advised by travel veterans to drink Fix, a legacy Greek lager, and sadly couldn’t find any, learning only later that the brewery had closed in 1983 (a revival occurred in 2009).

There was an Efes with stuffed tomatoes in Istanbul, and Retsina on the boat from Greece back to Italy, yet nothing remotely approaching intoxication occurred until I let loose for a night in Rome with a group of fellow budget travelers, having discovered 2,000-lira (one dollar), 2/3 liter bottles of Carlsberg (uncharacteristically ice cold) at a bar down the street from our pension.

Admittedly a few days later in Pecetto (near Turin in Italy), I drank beer, wine and local grappa with my cousin and his pal Scott, and after that was the schnitzel-bigger-than-your-plate joint in Vienna (Puntigamer draft?), and the glorious Augustiner beer hall in Salzburg.

Of course, we mustn’t neglect the Hofbräuhaus evenings in Munich, and numerous pints of Guinness in Sligo while watching Live Aid on the telly. Admittedly, there was too much vodka in Leningrad, but my Australian friend drank most of it, which is why HE vomited, not me.

The point is that 15 or so drunken nights out of 88 is a fairly nondescript consumption log for the professional drinker I fancied myself to be at the time. Why? In large measure this state of relative sobriety owed to fundamental caution, to qualms about letting go of myself in an unfamiliar environment, especially at night, often walking long blocks back to bed.

As an oversized male, I wasn’t so much worried about being robbed, but rather stepping into an open manhole, falling off a bridge or being struck by a speeding bicyclist.

Also, to reiterate, there wasn’t much money to party hardy, and I intended to hoard the funds I had very carefully. I learned quickly that Europe was no different than America when it came to higher on premise beverage markups, and as the days passed, my thoughts shifted to corner shops and markets, where beers were less expensive, to be purchased and carried a few blocks to the aforementioned park bench.

A camp cup and Swiss Army knife did the rest.

Parsimony gradually became a habit, and fortunately for me, the guidebook mogul Arthur Frommer proved slightly mistaken in quoting a $25-a-day figure. With the Euro as yet a far-off dream, the 1985 dollar was at an epochal strength against continental currencies, and the final calculation came out to about $19.50 a day, not counting the up-front Eurail pass and flights.

Had Frommer been correct, I’d have been in a bit of a quandary, because stepping off that return flight in Chicago on August 8, I had exactly $100 remaining on my debit card.

Math never was my strong suit, and yet the numbers added up (or down, as the case may be). 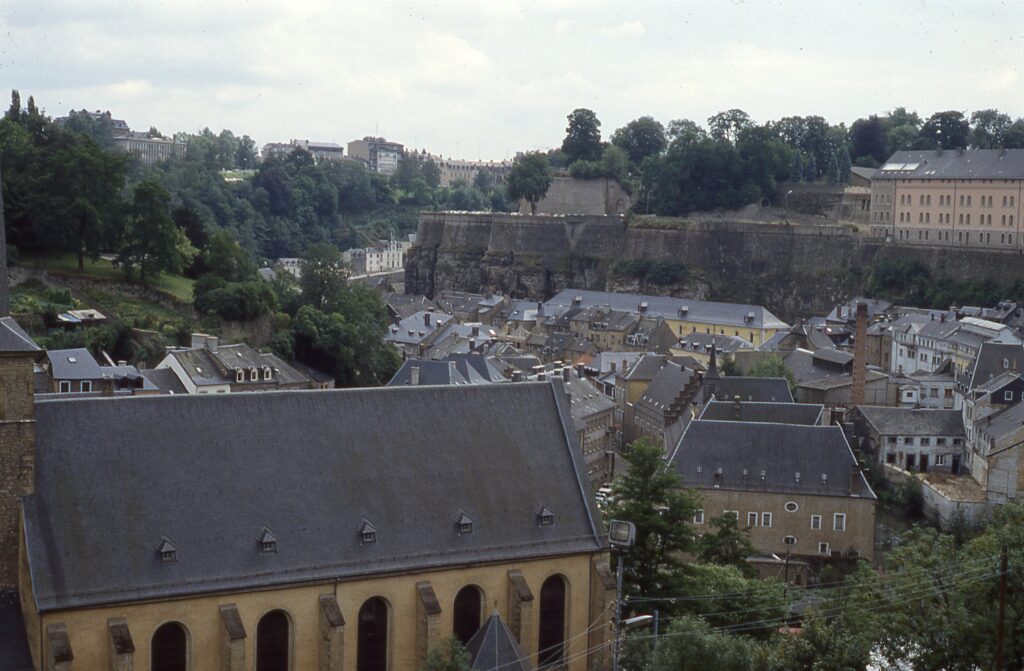 There was the requisite 45-minute Icelandair stopover at Keflavik for souvenir shopping (read: duty-free booze), which afforded my first official steps on something resembling European soil, but in truth, the first-ever amble across the continent’s historic ground must be said to have taken place at the Luxembourg airport’s international arrivals terminal.

After passport control and customs, I spotted an “exchange” window. Exhausted from a sleepless night, I turned and asked a fellow passenger in the queue whether I should get French francs or the Luxembourg variant.

“Well, that would depend on where you are, wouldn’t it?” he replied, with a surliness borne either by his own sleepless transatlantic night, or perhaps an upbringing of pain and betrayal as suggested by an unmistakable New York City accent.

Nonplussed, I waited silently in line and when my turn came, swiftly shoved the immaculately clean traveler’s check through a tiny aperture, waiting to see what sort of money would come spitting back, and hoping I wouldn’t have to answer questions in an unknown local dialect.

The teller motioned toward my passport and yawned. Luxembourg francs appeared…and yet another fresh new ritual had been experienced.

Further ahead, the baggage conveyor disgorged my spanking new Service Merchandise “athletic club” gym bag. Lacking backpack convertibility, it boasted a handy shoulder strap—and one of the strap’s connecting loops had been ripped away from the fabric, presumably by the baggage sorting claws, leaving it useless, and subsequently rendering the bag into a one-dimensional hand-held suitcase for the remainder of the journey.

So it goes. I emerged into a covered plaza, followed the signs for an airport bus bound for the central train station, and paid the driver with a crisp c-note in Luxembourg francs. A short ride through the suburbs followed, and then the bus glided into its parking space at the stylish old Gare (train station). I bounded out, at long last, into a stereotypically busy, sunlit street with sidewalks, bicycles and cafes populated by genuine Europeans.

All well and good. Wow!

Somewhere in Luxembourg City there stood an officially sanctioned international youth hostel with a reservation, facilitated well in advance by “snail” mail no less, eagerly waiting to house me. How to get there? Should I buy a city map, or risk abject humiliation by asking directions of a possibly non-English speaking passer-by?

A helpful Internet kiosk was out of the question, as the information superhighway had yet to be invented by Al Gore. Ditto smart phones, Uber and e-scooters.

But providentially, looming right in front of me, was a large sign that turned out to be a map of the city, undoubtedly erected as a public service for ignorant foreigners exiting the train station. Walking toward it, I abruptly stumbled and looked down to see the arm of a person dressed in a decently clean suit, passed out drunk in the shade of an adjacent fountain.

Fragrant and snoring, he was no help at all. Luckily the map showed exactly where I was, and where I needed to go, which looked to be no more than two kilometers (a mile and a quarter) in a straight line.

Easy enough on the face of it, except the street names in French defied easy memorization, and most importantly, there are no straight lines in Luxembourg City. The map was stylized and failed to show the city’s irregular topography, spilling across ridges, rivers, ravines and hills, and contoured not unlike certain corners of West Virginia.

The expected 20-minute scenic hike took almost two hours, mercifully ending only after I’d made almost a complete circle and chanced to pass a pole sporting various directional signs, one of which was the familiar hut-and-tree logo pointing the way to the youth hostel. It had taken so long to perform my simple arrival tasks that the hostel already was open for afternoon hours.

I checked in without difficulty, located my assigned bunk in what would become a completely filled 12-person dorm room, declined both a shower and an institutional dinner of noodles and mystery meat, never once considered drinking a beer, and proceeded to sleep 15 hours straight through until morning, when after a continental breakfast, it came time for the trek back to the station to board my first European train.

There was a method to my madness, or so I believed. Was it possible to get to Greece from Luxembourg with Eurail pass? I was about to find out.

Next: Southbound and down.

(A note on the photos: This installment’s views of Luxembourg actually were taken in August, when I returned for the flight home.) 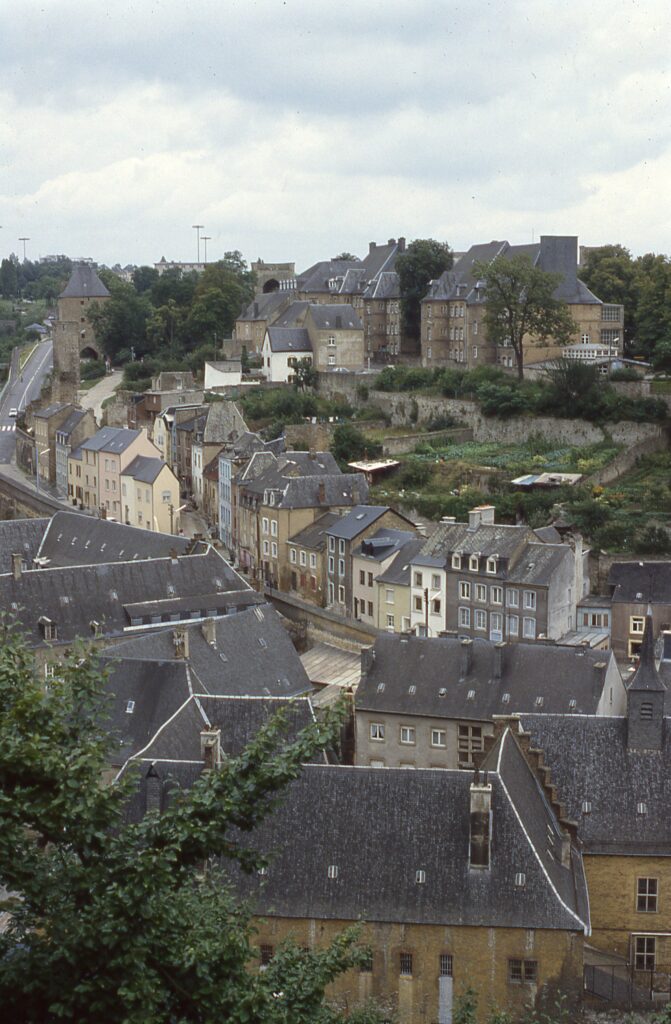