At a time when so many of my high school friends are talking about retirement, I’m busier now than at any point since my departure from daily responsibilities at the New Albanian Brewing Company in 2016.

In fact, the past four months have been an absolute blur. There was a time when such disorientation might have been the result of purposeful dissipation, but no longer. If I’ve been intoxicated at all since the beginning of 2022, it’s been once, maybe twice.

The birth of Common Haus Hall in Jeffersonville, where I’m tending to the beer program, has been like putting an ocean liner out to sea, requiring a great deal of time and tender loving care. Meanwhile at Pints&union in New Albany, the demands haven’t been as urgent, but are of no less importance overall.

If all goes well with Common Haus, maybe our next company project can be a Belgian beer bar with frites and mussels. An aging boy can still dream, right?

Our two-year-delayed family vacation in Portugal came along in late April. It necessitated stockpiling posts in advance for Food & Dining Magazine, where (you’re now being reminded) I’m the digital editor and contribute a weekly beer column on top of posting daily eating and drinking news.

It has been frenetic, and yet the erstwhile “Potable Curmudgeon” (that’s me) finds himself far more placid than ever before. I’m delighted to still “be” in beer after all this time; granted, no amount of Hallmark holiday platitudinizing changes the fact that a job involves work, but when it pertains to something you love, work seems far less of a chore. Why stop?

The very notion of retirement never made much sense to me, anyway. The hoary adage “idle hands are the devil’s workshop” fully applies to me; like Ulysses S. Grant, I’ve found periods with nothing to do to be precisely the times when I’m most tempted to indulge a bender or three, often in the same day.

What’s more, shouldn’t we retire at the front end of our lives, when we possess the stamina to enjoy it, rather than on the back side, when decrepitude inevitably starts to set in?

Hence the story I used to tell about my foreign journeys during the 1980s. During the eight-year period 1985-1992, I spent just shy of two (cumulative) years traveling in Europe, and referred to it as my “early retirement.”

It’s not exactly true, of course, because six years of work were required to be gone for two; those pesky details. They were transitional excursions in more ways than one, and by 1990, when I began working at Sportstime Pizza—eventually to be spun off into Rich O’s Public House and later the New Albanian Brewing Company—that’s when all my interests started to merge together.

Eventually, by necessity, travel for me became more frequent at the price of shorter trip durations. They all add up. To my mind, I’ve successfully completed 41 overseas seminars, each of them tantamount to credits toward continuing study and life experience. Taken together, they’re a phantom master’s degree. A university somewhere should award me a real one.

If I’m to be completely honest, beer wasn’t the primary reason for the travel bug’s bite. I’d always been interested in history and geography, then in college came exposure to the contagion of the “Western canon” in literature, music and art. I had no religion, so Europe filled the slot. Later, beer took co-billing.

But to contextualize these travels as components of what was to become a career in beer, the early European adventures were a practical proving ground for the biggest existential question of all:

If American beer and brewing came to the USA from Europe, how had it remained so vibrant in Europe, while devolving to utter Liteweight crap by the time I’d come of age and found myself increasingly repelled by the state of American beer?

My first trip abroad finally came in 1985, and in retrospect, I understand that the beer and brewing counter-revolution (didn’t mass-market beer “revolutionize” the post-Prohibition marketplace by rendering beer into a commodity like white bread?) had been underway at least since the advent of New Albion Brewing Company in 1976.

Except that in 1985, metropolitan Louisville had yet to see (or taste) very much of it. Europe remained the place to go if one wished to experience the best that beer could be, and so I went, even though I knew almost nothing about beer and brewing apart from yearning for something better. In all probability, that’s what made learning so much fun.

Following is a previously published account of the run-up to my first overseas excursion, lightly edited.

“The Greek word for “return” is nostos. Algos means “suffering.” So nostalgia is the suffering caused by an unappeased yearning to return.”
― Milan Kundera, Ignorance

One May morning in 1985, a middle-class American youth from bucolic Floyd County, Indiana, stumbled greasy and sleepless into the arrivals hall of a foreign airport. Following the requisite passport, customs formalities and currency exchange, he endured a thoroughly confusing and memorable first day in Europe.

37 years have passed since that bewildering and exhilarating Luxembourg inaugural, and the nostalgia is palpable. My inaugural European sojourn was conceived and executed with a single-minded determination unknown to me at the time. It taught me to believe in myself, and it led to many, many more pilgrimages. There have been no regrets whatever.

During my first European summer, I commenced an overdue transition from populist local yokel to genuine “citizen of the world,” as the athlete Edwin Moses so eloquently phrased it during the otherwise jingoistic and embarrassing David Wolper Memorial Olympiad in Los Angeles in 1984.

Europe in 1985 was a life-altering epiphany, but in truth, even the most minor of ephemeral insights would have seemed disproportionately huge given my indecisiveness and youthful lack of focus.

A university degree in philosophy made for witty repartee, but little else, and it seemed to me that career choices were for fools who never saw the sun rise after an evening spent closing every bar in town. Ten placid green acres with a split-level dream home, a riding lawnmower, little leaguers and a fridge filled with Old Milwaukee Light? That was philistinism, right?

At the age of 24, two part-time jobs were sufficient to pay my bills. They also provided a semblance of scheduling flexibility in the event of hangovers – as there always was enough beer money. Why else would a person work at a package store in the first place? But in truth, I wasn’t going anywhere.

Even worse, I knew it.

In 1983, I was asked by an area high school teacher to accompany him as a second chaperone on a student trip to Europe the following year. The price seemed reasonable at $1,600 for nine days, with airfare, hotels, bus and most meals included. I responded affirmatively.

A few months later, I was strolling past the travel section in the library when a title caught my eye: “Europe on $25 a Day,” by Arthur Frommer. As ever mathematically challenged, I shook my head with disbelief. Was it a misprint? Could it really be true? Skeptical, I checked out the book, took it home, poured a beer, and started reading. Eventually a pocket calculator was produced. 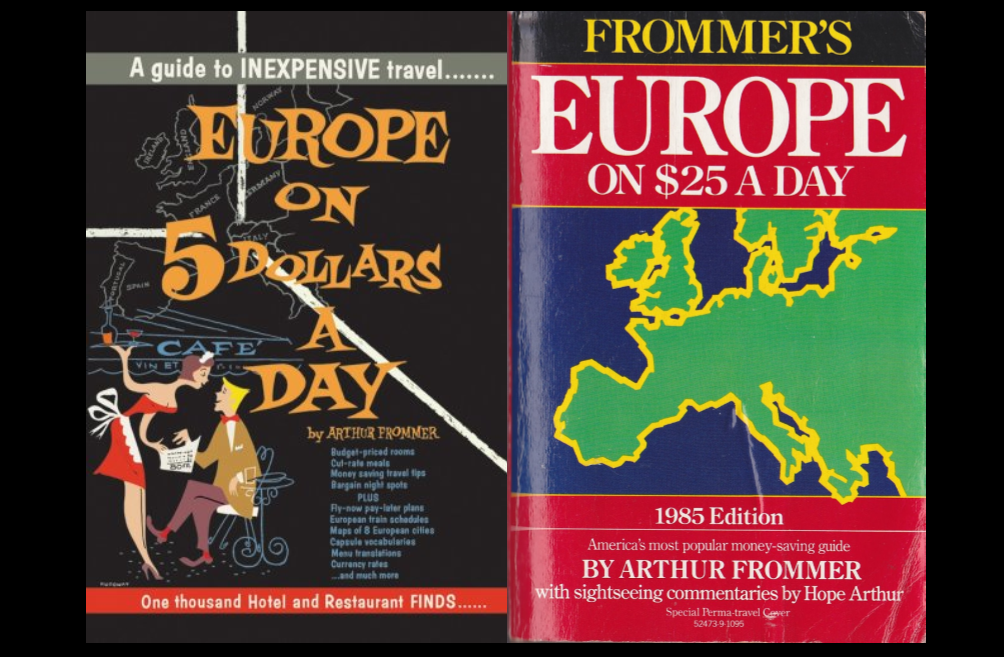 My fellow twenty-something males would have required the woman (or women) of their dreams running bikini-clad across a Florida beach during a sultry rainstorm to elicit anywhere near my response to Frommer’s book, in which clear and reasonable tips plainly illustrated how to do Europe right, and for far longer duration than a mere week.

My new writing hero insisted that travel could be educational, and offer a rare glimpse into different worlds. His advice on the nuts and bolts of budget travel technique was relentlessly informative, effortlessly evocative and consistently pragmatic.

My brain was hard-wired for the humanities and history, and yet the comparative sums quickly became persuasive. At $25 per day, my $1,600 properly budgeted the Frommer way came out to 36 days, not nine. If I were to postpone the epic voyage for another year, leaving even more time to save money, the trip might last three months, not nine days.

For the next year and a half, my European travel obsession escalated, fed by a steady diet of travel books, magazine articles and PBS documentaries. Thomas Cook rail schedules were studied, and European history devoured with renewed zeal. Plans were jotted, expanded, revised, discarded, and brought back from the waste paper basket. I acquired a Pentax K-1000 camera and learned to use it, just barely.

By the spring of 1985, with departure nearing, a rough outline had settled into place.

There would be a round-trip flight on the then-cheapest Icelandair from Chicago to Luxembourg, returning 88 days after departure. Ground transport would be a three-month Eurailpass. Convinced that it would be my sole and only trip to Europe, a kamikaze itinerary was planned, incorporating nights on trains sleeping in seats, and crashed on the decks of boats. I studied every available trick to skim cash and expand the duration of my experience.

Then suddenly, the curtain finally rose.

There was a sleepless night on an eastbound flight, and before I knew it, a strange Luxembourg airport. Subsequently, theory yielded to practice. My well-ordered plan did not take into account greenness, timidity and stubbornness. The real work was just beginning.

The profusion of languages, local customs and currencies overwhelmed the senses. ATM barely existed, and the failure to note esoteric regional holidays and erratic hours kept by mom and pop shops led to foodless nights. There were missed connections, panicked fumbling and myriad minor disappointments.

There were times of panic, and yet I managed to keep moving. Despite the red-faced embarrassments, cheap hostels already booked solid, standing-room-only overnight train trips, fear of squat-only “toilets” in Turkey, forgetting a towel and using my only long-sleeved shirt to dry off, in the end all of it managed to work out. Halfway through, I was dispensing sage advice to the newbies.

88 days later, back again in Luxembourg for the westbound flight home, I could think of only one general topic.

When would there be another time? Could it be soon?

From the vantage point of 2022, maybe there’s another reason for continuing to work: I’ve spent all the retirement savings traveling. If so, I wouldn’t change a single damn thing.