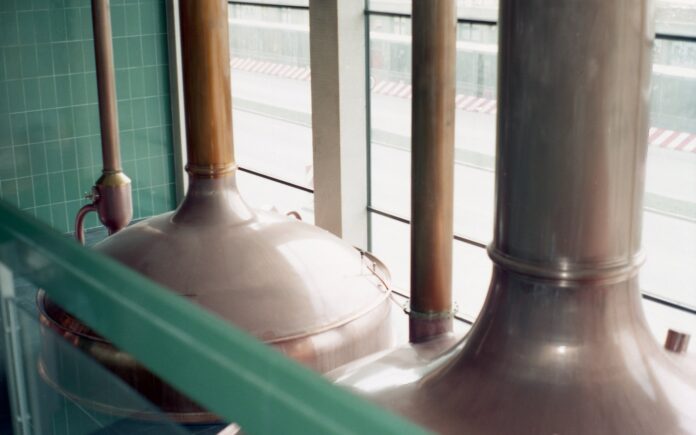 Previously I introduced the 10 core drafts slated to debut at Common Haus Hall in Jeffersonville, these being the 10 beers available to patrons throughout the building.

An additional eight draft spouts eventually will be deployed for the second floor and adjacent deck space. Because the second floor at Common Haus is to be designated as bar service only, we’re calling it the Biergarten, both indoors and out (there’ll be table service in the first floor dining area).

The 10 core taps embrace 10 distinct beer styles, which is a purposeful choice. Consequently, the topic of beer “style” is worth a digression, accompanied by a glance at the distinctively German concept of Reinheitsgebot.

I’ll also have an update on our first two collaborations with Against the Grain and Akasha, which will arrive soon after opening, but first a brief tutorial about what we mean by “lager” and “ale.”

The four basic ingredients of beer are barley, hops, water and yeast, at least during the most recent few hundred years of human history. Other cereal grains can be used, too, as well as spices or plants in place of hops (except under the jurisdiction of the Reinheitsgebot, as we’ll see shortly).

Barley is prepared for brewing by malting, then mashing, and the resulting liquid, called wort, is boiled. Hops are added during the boil, and after the liquid is cooled, it is fermented.

This is the critical juncture, for the fermentation temperature determines whether a beer can be identified more specifically as an ale or a lager.

Lagers are so named for their necessary period of cool maturation, as taken from the German verb lagern, meaning “to store.” In effect, lager brewing developed in Germany and Central Europe since the 1600s, benefiting from subsequent advances in science and technology, including the advent of microscopes, steam engines, rail transportation and artificial refrigeration.

Beer is beer, but ales and lagers are different groupings. Bitterness, strength or color can tell us little; rather, ales have fruity and spicy flavor profiles, while lagers are crisp and clean. There are exceptions to the rule, of course, and yet these characteristics offer a place to start making sense of style, because organizing beers by style is a more specific method of differentiation.

Like language itself, beer styles evolve and are subject to revision. By necessity, the very concept of beer “style” is an approximation, albeit helpful.

Stylistic considerations in beer may be debated, at times endlessly, but it cannot be doubted that basic stylistic knowledge facilitates one’s journey through the beer and brewing cosmos.

Common Haus is conceived as a celebration of the German ethos in food and drink, and consequently, the German “family tree” of beer styles forms the basis of the Common Haus selection.

However, it must be noted that the German cultural heritage is not confined to the present-day borders of Germany as a nation.

Austria and parts of Switzerland and Belgium are German-speaking. In areas of modern France, Czech Republic, Poland, the Baltic Republics, Northern Italy and Romania, elements of German influence stretch back hundreds of years.

While German ways of thinking about beer and brewing triggered a worldwide lager revolution in the 19th century, top-fermenting ale styles not only have survived lager’s hegemony, but thrived: Alt, Berliner Weisse, Gose, Kolsch and Weizen are important examples. They’re actually the oldest exemplars of German brewing expertise, now occupying their own tasty niches.

Another consideration is the Reinheitsgebot, the “beer purity” law in Germany dating to Bavaria in the year 1516. Perhaps the single most misunderstood facet of German brewing, the Reinheitsgebot originally was enacted to fix prices, restrain trade and regulate the use of cereal grains by brewers, and by logical extension, bakers.

The Reinheitsgebot famously decreed that only barley malt, hops and water were to be used to brew beer, which leaves out yeast because the law came into being just before microscopes enabled us to understand how yeast converts sugar water to alcohol.

For our purposes at Common Haus, the Reinheitsgebot is largely irrelevant, but of no harm when applied to certain beer styles, especially lagers, which evolved to correspond with the strictures of the Reinheitsgebot in the first place. Other signature styles, including wheat ales, were (in effect) grandfathered in.

There was a time when the Reinheitsgebot was used to exclude non-cooperative beers from the German marketplace. The European Court put paid to this long ago, and styles like English Bitter, Trappist-style Belgian ale and American Cream Ale are perfectly free to ignore this rather restrictive definition of “purity.”

You’ll find them at our sister establishment, Pints&union.

So, as styles pertain to pouring decisions for the 18 draft lines at Common Haus, we’ll be taking a fairly broad approach to “German” beer.

With the assistance of the Beer Judge Certification Program (BJCP; 2015 references), here is a list of styles theoretically eligible for consideration, noting that theory and practice often are two contrasting goals.

Our aim is to rotate certain of our upstairs taps to experience as many examples of these styles as possible, and as often as availability permits.

Leipzig (home of Gose) wasn’t built in a day, and we’ll ease into a schedule as Common Haus moves forward.

Two of the most exciting stylistic excursions soon to be available for the pleasure of Common Haus patrons are collaboration beers with Against the Grain (at Slugger Field) and Akasha (in NuLU).

Next Train to Bamberg is a Rauchbier (“smoked” lager) brewed by Jerry Gnagy at Against the Grain Brewery & Smokehouse, using smoked malt from Sugar Creek Malting (Lebanon IN). Our target is a gentle smokiness more indicative of Spezial in Bamberg, as opposed to the better known Schlenkerla.

Düsseldorfer Altbier, brewed by Rick Stidham at Akasha Brewing Company. Altbier means “old beer” and is a legacy of pre-lager brewing norms in Germany. It’s a top-fermented ale with a bronze/amber color. The flavor profile boasts a restrained fruitiness and noble hop presence, burnished by a period of cold aging.

As a final note, Radler is not a beer style as such. Radler means “bicyclist” in German, and is the equivalent of the British shandy, implying a mixture of half beer (usually a Helles, but not always) and half fruit soda. We hope to develop a list of house-mixed draft Radlers, augmented by imported, pre-mixed Stiegl cans from Austria.

Next time, a look at cans and a handful of bottles.