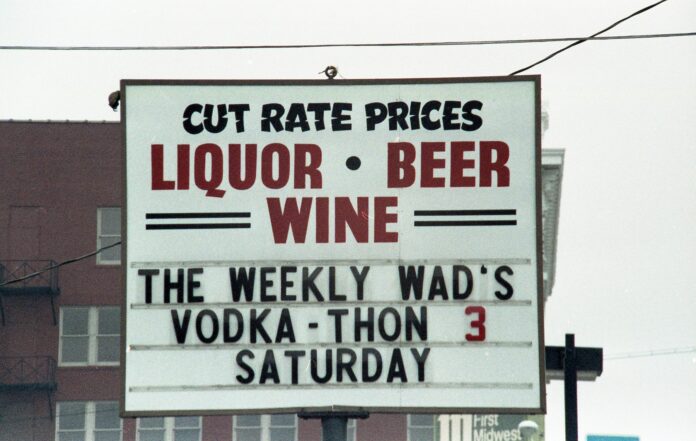 These many years later, I’m saddened to observe the passing of so many Scoreboard Liquors stalwarts, including Jim Creech, the principal owner.

Mamie and the School Marm are gone, as well as Norman and James Not Jim. There was the daily Canadian Club lady with all those beautiful hardbound books, Bud the Upholsterer. Doc Smith and numerous others. Their faces pass through my dreams on occasion, as though the time had arrived for a final round before closing. These were the people who taught me about the human element of the liquor business – the good, the bad, and everything in between.

Among the departed, Gin Lady, originally known to us as Mother Gargle from the mother-in-law in the Born Loser comic strip of old. She usually walked to the liquor store from the East Bloc-designed Riverview senior citizen housing tower roughly one hundred yards away.

As the day progressed and Gin Lady stopped by for the second or often third pickup, at times resorting to the use of a taxi, her red-dyed hair would become more and more unmanageable and frizzy. By late afternoon, her coiffure would be standing straight up, antenna-like, as though she’d jammed a finger into the power grid.

You see, the Seagram’s was never for her. It was always for her gentleman friend, who perpetually called on her, but was never seen at any time. Neither was Gin Lady after the store moved across town. I never knew her name.

Chemical Man was so dubbed for the lack of nutrients in his bloodstream, and our certainty that the only thing keeping him alive was infusions of formaldehyde, Kessler whiskey and Sterling beer. Early on, when I hadn’t yet come to understand the nuances of alcoholism, I asked Chemical Man why he bought three half-pints of Kessler at points throughout the day rather than a liter of whiskey first thing in the morning, which would be more economical.

He sputtered indignantly that my college education had taught me absolutely nothing, because any fool knows that if you start the day with a big bottle, you’ll just go and drink it all before lunch – and then what?

Later, Chemical Man would ask for help carrying the daily case of Sterling to his house, which fronted the side street fifty yards from the store’s front door. I’d lock the door and carry it over, placing it on the porch for him. A year or so after Scoreboard moved, his obituary appeared in the newspaper. I’d have bet money Chemical Man was in his 70s, but he was only 59 at the time of his death.

I was extremely fond of Ralph.

During Harvest Homecoming each year we’d rope off the parking lot and charge people $5 to park, unless they were paying customers. The idea eventually arose among my friends to leave our own cars parked there, purchase some Stolichnaya, Rose’s Lime Juice and plastic cups, and stroll the festival at our leisure.

Thus was born the concept of Vodka-Thon, and one of those years, Ralph came along.

Ralph was a regular customer. He was a few years older than me, quiet and heavily bearded, and if memory serves, he’d been in the army in Vietnam. He was an autodidact, smart and also a tad eccentric — he actually read books, regretted not becoming an undertaker, and once gifted me with one of his old textbooks about mortuary science. I still have it somewhere.

How did I know all these things?

Because Ralph came in a lot, at all hours of the day, and what I didn’t know — what I chose not to know — was that he was an alcoholic. Functional, perhaps, but still. Vodka-Thon was a lark for us. It was everyday reality for Ralph, quite literally a walk in the park.

Later in the 1980s, after the liquor store had moved to the corner of Spring and Beharell, we lost touch. Eventually I heard from a mutual acquaintance that things had gotten bad for Ralph in every respect. Evidently I did nothing with this information. He had become one of those faces lost in the huge crowd of past lives during the time when I became immersed in the Public House.

One morning in 2015 the heritage of Vodka-Thon occurred to me, and Ralph’s face popped into view. I did some googling, and he’d been dead since the year 2000 or thereabouts. It was sad knowing this. I believe he had children, and they may still be around, grown now. If so, and if they read this, please know that none of these ruminations are intended as flippant or disrespectful.

In fact, I feel awful for remaining oblivious to such matters. I didn’t know then what I know now, but that’s hardly an excuse for doing nothing when it was obvious something was wrong. Ralph seemed like a good fellow, tormented by demons, at least one of which was the disease of alcoholism.

Ralph, wherever you are, I’ll always remember our chats about books and life. Rest in peace, sir.

Of the many people I met at Scoreboard, Snake was tops. For decades he kept a series of decrepit pick-up trucks ticking just long enough to run a regular route through New Albany, collecting cardboard and taking it to the long-defunct Riverside Recycling for a few bucks, which went into the jar and paid for season tickets to Louisville Redbirds games at Cardinal Stadium, before the downtown ballpark came into being.

Snake’s life wasn’t easy, but it could have been worse, and he generally kept a cheerful demeanor in the face of the curve balls thrown at him by fate. For example, the nickname came from a tattoo on his right arm, the one that ended just below the elbow, the rest having been removed after an accident decades earlier.

He had a recurring, acrimonious relationship with the New Albany Tribune, our local newspaper of record, and often vowed that if his wife died before him, he’d call to cancel the newspaper first — and only then ring the funeral home.

When Snake was young, he worked as a bartender and drank just as hard as the customers until swearing off the bottle in the early 1960s. He never swallowed a drop again, not even once. When the bartending jobs at New Albany’s dwindling neighborhood taverns dried up, Snake turned to cardboard full time, and occasionally filled a shift at the liquor store.

In 2001, Snake’s truck died for the final time, and since cardboard “wasn’t paying squat,” anyway, it was time for him to get out of it. He’d already decided that ballgames were too expensive and the club’s management too arrogant. A couple years later he stopped by my pub to chat, and it was the last time I ever saw him, for he died shortly thereafter on the day before my birthday.

There were lots of others who were important to me, like all those lawyers — Gene, Tom, Lewie and Michael J. — and Virgil upstairs at the probation department (I wasn’t joking; for many years the required alcohol avoidance classes were held above the package store), and I miss them all.

However, I miss Snake the most. Rest in peace, my friend. If you could see what’s become of the local newspaper these days, you just might reconsider that vow of sobriety.