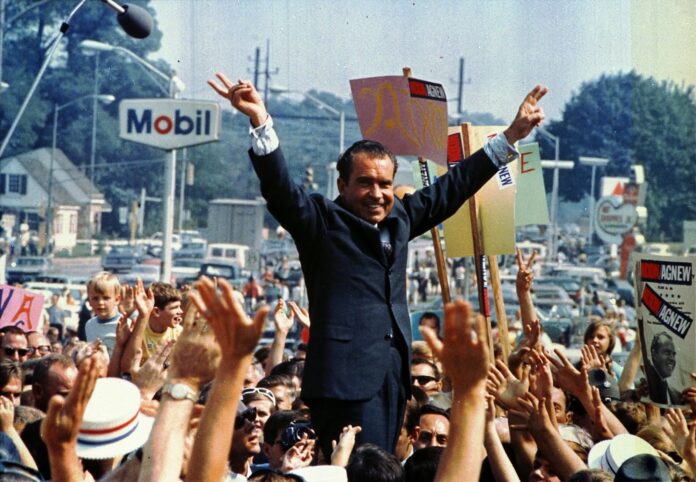 Arguably, the finest political obituary in American history. A Twitter friend linked to it recently, remarking that he rereads the piece every few months. It’s a sign that I should, too — and now it’s your turn.

Link: “He Was a Crook”, by Hunter S. Thompson (The Atlantic; originally published in Rolling Stone on June 16, 1994). Excerpts below.

It is impossible to read Dr. Thompson’s masterwork without laughing aloud. It is equally impossible to pull one representative passage. One simply must read the whole piece.

On occasion it will occur to me that I’ve borrowed a phrase from Thompson while writing. This is the reason why I limit my reading of his essays, because doing so influences my own style. Unconsciously, I try to emulate it. The same applies to H.L. Mencken.

My heroes are the polemicists. Ah, yes; always and forever.

DATE: MAY 1, 1994
FROM: DR. HUNTER S. THOMPSON
SUBJECT: THE DEATH OF RICHARD NIXON: NOTES ON THE PASSING OF AN AMERICAN MONSTER…. HE WAS A LIAR AND A QUITTER, AND HE SHOULD HAVE BEEN BURIED AT SEA…. BUT HE WAS, AFTER ALL, THE PRESIDENT.

I have had my own bloody relationship with Nixon for many years, but I am not worried about it landing me in hell with him. I have already been there with that bastard, and I am a better person for it. Nixon had the unique ability to make his enemies seem honorable, and we developed a keen sense of fraternity. Some of my best friends have hated Nixon all their lives. My mother hates Nixon, my son hates Nixon, I hate Nixon, and this hatred has brought us together.

Nixon laughed when I told him this. “Don’t worry,” he said, “I, too, am a family man, and we feel the same way about you.”

It was Richard Nixon who got me into politics, and now that he’s gone, I feel lonely. He was a giant in his way. As long as Nixon was politically alive — and he was, all the way to the end — we could always be sure of finding the enemy on the Low Road. There was no need to look anywhere else for the evil bastard. He had the fighting instincts of a badger trapped by hounds. The badger will roll over on its back and emit a smell of death, which confuses the dogs and lures them in for the traditional ripping and tearing action. But it is usually the badger who does the ripping and tearing. It is a beast that fights best on its back: rolling under the throat of the enemy and seizing it by the head with all four claws.

That was Nixon’s style — and if you forgot, he would kill you as a lesson to the others. Badgers don’t fight fair, bubba. That’s why God made dachshunds.

If the right people had been in charge of Nixon’s funeral, his casket would have been launched into one of those open-sewage canals that empty into the ocean just south of Los Angeles. He was a swine of a man and a jabbering dupe of a president. Nixon was so crooked that he needed servants to help him screw his pants on every morning. Even his funeral was illegal. He was queer in the deepest way. His body should have been burned in a trash bin.

It is fitting that Richard Nixon’s final gesture to the American people was a clearly illegal series of 21 105-mm howitzer blasts that shattered the peace of a residential neighborhood and permanently disturbed many children. Neighbors also complained about another unsanctioned burial in the yard at the old Nixon place, which was brazenly illegal. “It makes the whole neighborhood like a graveyard,” said one. “And it fucks up my children’s sense of values”

The last word goes to the Manic Street Preachers (from the album Lifeblood, 2004).