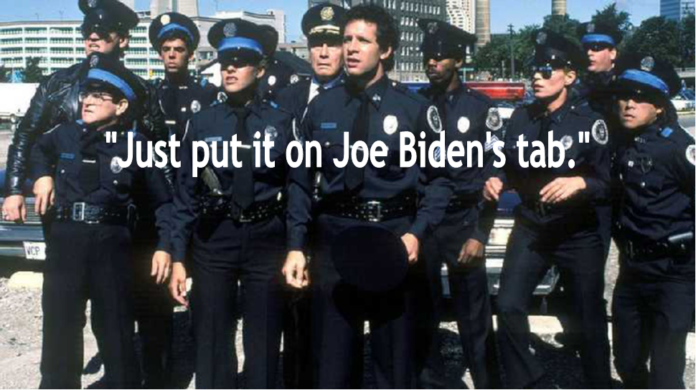 The reporter John Boyle (WFPK) does a great job of sifting through complicated material and explaining the situation clearly.

The New Albany-Floyd County Building Authority, an independent group that oversees the governments’ properties, says the city of New Albany is not cooperating in discussions over building leases and is repeatedly late in paying rent.

These days I seldom comment on such matters, but there’s a relevant “new” point pertaining to the predictable pathways of opportunism.

We already knew that municipal governance in New Albany during our era of Gahanism involves incessant daily Orwellian brinksmanship with the “enemy” (Republican-dominated county government), with all the commensurate tall tales and propaganda.

Those are a given, and almost numbingly routine at this point, but if you’re wondering about the ace in the hole behind this latest police headquarters posturing, it’s the $16.9 million in federal COVID recovery money awarded the city.

You’ll recall it was conveniently removed from the control of elected officials by Gahan’s council cabal precisely so that projects like police enhancement (and its inevitable corollary, the awarding of fresh new contracts to the mayor’s dominant cadre of design and engineering campaign backers) can be pursued safely by the redevelopment commission without pesky interference from the public.

Why would Gahan build a new police headquarters? It’s for the same reason your dog licks his nether regions — because he CAN, but unlike your canine, it’s also because the feds just gave him the money to do it.

The supposed Democrats will now perform a neo-GOP public safety pageant for the benefit of the many Dixiecrat-leaning “blue” urban inhabitants, and those supporters fancying themselves as “progressive” will gaze off into the sky and commence their usual rationalizations.

Pins will drop and crickets chirp, so be ready for Reisz Mahal Police Academy Deluxe, and if you’re like me, have a nice chuckle v.v. the perpetual gullibility of city voters.

And now, back to protective self-muzzling.

I so enjoy living in this one-party city (D) in a one-party state (R).