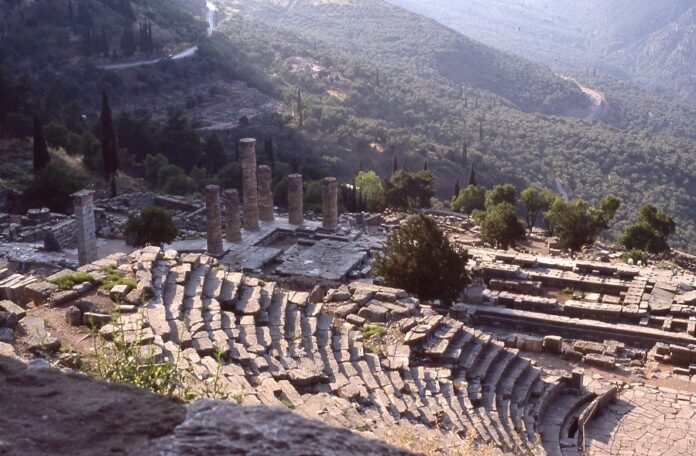 “Edibles & Potables” is Food & Dining Magazine’s Sunday morning slot for a merry meander down the rabbit holes we encounter. Our goal is to emerge later with a steaming pot of Hasenpfeffer and a Brötchen or two.

Today, an obsession with a random, dated culinary reference about Greek food. Bear with me, please.

As the travel guidebook was titled in the early 1980s, Arthur Frommer’s Europe on $25 a Day proved a rare example of a tome that demonstrably and comprehensively changed the course of my life.

In 1957 ex-G.I. Arthur Frommer published the groundbreaking first edition in his series, then reflecting a suggested daily expenditure of $5.

Frommer eventually sold his travel business to Simon & Schuster, but later he reacquired the rights. Happily the author is still with us at the age of 92, and now his daughter runs the company.

Last week I thought about Frommer’s guidebook again, just after my wife and I booked a short jaunt to Athens, Greece this coming January.

I’ve never returned to Greece since my very first trip to Europe in 1985. Reliving the memories, I found my copy of the 1984 edition of Europe on $25 a Day and took a deep dive back into Frommer’s text.

It all began for me in 1983, when I was asked by my former high school English teacher, with whom I’d become good friends, to accompany him as a second chaperone on a student trip to Europe the following year.

The price seemed reasonable at $1,600 for nine days, with airfare, hotels, bus and most meals included. I responded affirmatively.

Providentially, a short time later I was strolling past the travel section in the public library when a title caught my eye: Europe on $25 a Day, the 1983 edition by Arthur Frommer.

As a mathematically challenged humanities major, I shook my head with disbelief. Was it a misprint? Could it really be true? Skeptical, I checked out the book, took it home, poured a beer, and started reading. Eventually a pocket calculator was produced.

Frommer’s book exploded with clear and reasonable tips about how to see Europe the right way by getting the most out of one’s travel dollars. His advice about the nuts and bolts of budget travel technique was relentlessly informative, effortlessly evocative and consistently pragmatic.

Having learned the basics, the budget traveler could take full advantage of foreign travel’s educational aspects, offering a rare glimpse into different worlds.

My head exploded. At $25 per day, $1,600 properly budgeted the Frommer way came out to 36 days, not nine. If I were to postpone the epic voyage for another year, leaving even more time to save money, the trip might last three months, not nine days.

Consequently, I opted to wait and accumulate.

For the next year and a half, my European travel obsession escalated, fed by a steady diet of travel books, magazine articles and PBS documentaries. Thomas Cook rail schedules were studied, and European history devoured with renewed zeal.

Plans were jotted, expanded, revised, discarded, and brought back from the waste paper basket. I acquired a Pentax K-1000 camera and learned to use it, just barely.

By the spring of 1985, with my departure nearing, a rough outline had settled into place. I’d fly into Luxembourg via Iceland Air from Chicago, validate a three-month Eurailpass, and then head south through Switzerland and Italy straight to Greece and Istanbul.

Seven days after greeting European soil for the first time, I was in Athens, staying at a small family-run hotel just a short walk from the Acropolis. It was heady and exotic stuff for a hick from (somewhat near) French Lick.

When it came to formulating a budget travel dining strategy for Athens, one piece of Frommer’s advice struck me as curious.

“The best street for budget restaurants serving palatable food is Jan Smuts Street (also known as Voukourestiou Street), which juts off Venizelou Street, only a few steps from the top of Constitution Square. There are, of course, many much cheaper restaurants than these in Athens, most of them, however, serving dishes that simply aren’t acceptable to Western tastes. Because there’s a vast difference between the meals a Greek workingman eats (heavily oiled, often sour), and those we’re accustomed to, Athens is the only city in Europe in which I’ve specifically sought out the tourist restaurants. But don’t expect corned-beef-and-cabbage; these are moderately priced tourist restaurants, and therefore the food is still Greek, although a few concessions are made.”

But I had enjoyed my initial rendezvous with retsina in Patras, and later, on the ship back to Italy, I instructed a handful of German and Australian travel companions in the dubious “art” of the quarter bounce drinking game, the de facto Hoosier national pastime prior to the advent of corn hole.

Up on the observation deck in the gorgeous open air, we made do with bottles of retsina, a weathered camp cup, and the largest available drachma coin.

I didn’t entirely follow Frommer’s advice during my two weeks in Greece, but never experienced an inedible meal. Overall I ate far better than expected because the price structure was so inexpensive.

Language differences occasionally intervened when it came to interpreting an eatery’s menu, but usually someone was around to translate, and on one happy occasion the waiter guided me into the kitchen to point at whatever looked good, just as Frommer said they would.

The point to this lengthy rumination is that after re-reading Frommer’s Athens eatery advice 37 years later, his words strike me as a rare misstep on the part of my guru.

Frommer’s reference to the unacceptable foods eaten by the typical “Greek workingman” reads classist in retrospect, although in fairness few of us knew then what we know now about such distinctions.

But moreover, exactly what was Frommer trying to say by describing Greek food as “heavily oiled, often sour”?

Oiliness might be easy to explain. Then as now, Greeks consume more olive oil than anyone else in the world, at around 5.3 gallons per person each year.

I, too, absorbed my fair share of olive oil in 1985, often by sopping it from salad plates and stew bowls using delicious crusty bread.

(But wait: Hasn’t this become standard appetizer procedure at upscale restaurants the world over?)

Sourness in Greek “workingman’s” food is a more difficult characteristic to pin down, and brief internet research yesterday yielded no clear explanations for Frommer’s comment.

However, there are plausible hints, foremost among them being the ubiquity of pungent Greek yogurts and cheeses, most of them using sheep’s or goats’ milk.

Perhaps “sour” also is an imperfect synonym for “strongly flavored,” as in the heavy use of native herbs like oregano, mint, savory and mastic (crystalized sap from pistachio trees), especially in conjunction with tart lemon juice.

Another theory is that traditionally, sugar has not been an additive in Greek cuisine apart from the desserts, where sweetness has been achieved by the use of local honey.

To me, Frommer’s words in 1984 almost surely must be interpreted as warning Americans against the flavorful authenticity of Greek country (read: peasant) cooking, hence the rampant irony, because almost four decades later, regionally-based Greek country cooking is universally regarded as admirably healthy, forming the basis for the “Mediterranean” way of consumption.

As such, what did Frommer mean by “concessions” at those dining spots he considered suitable?

In a July 2021 podcast at The Splendid Table, culinary author Diane Kochilas explained that traditional Greek cooking changed considerably a century ago when an influx of refugees from the former Ottoman Empire came to resettle in Greece as an aftermath of war between Greece and Turkey.

According to Kochilas, these ethnic Greek newcomers brought with them a modified, more urban-oriented way of thinking about food, in contrast to the still-prevalent rural way of life in Greece. To generalize, a Greek shopkeeper in Istanbul wasn’t eating the same foods as a shepherd in Thassaly.

For instance, Kochilas cited two of the dishes we all probably associate most intimately with Greece, moussaka (eggplant lasagna) and pastitsio (pasta casserole), as having come to the country in earnest with those refugees a century ago.

Kochilas noted that preparing moussaka would have required knowledge of French cooking techniques in order to properly make the signature béchamel sauce, reflecting an experiential background missing in rural Greece at the time.

So, albeit inadvertently, those many years ago Arthur Frommer was pointing his readers toward cosmopolitan culinary “concessions” like these – and, decades later, the typical Greek workingman has had something akin to a last laugh, given that regionally-based Greek country cooking has become the envy of health-conscious diners everywhere.

Or maybe not. Of course, I’m indulging in guesstimates, and might be utterly mistaken. If so, feel free to let me have it.

All I know is that in 1985, I enjoyed every last morsel in Greece, from street souvlaki to harbor-side octopus, and not to omit lamb, yogurt, beans, orzo, raisin bread and baklava.

My first-ever Greek salad in Athens of cucumbers, tomatoes, Kalamata olives, feta cheese was dusted with oregano and drenched in olive oil, and I’ve been making it at home ever since. Of course I still enjoy moussaka and pastitsio, irrespective of their precise origins.

A final thought: one thing that I did not do in Greece in 1985 was photograph my food.

Maybe I should have, although it wasn’t common at the time. Athens in January 2022 is likely to be a different story, and I promise to share the bounty of images in a future “Edibles & Potables” post.