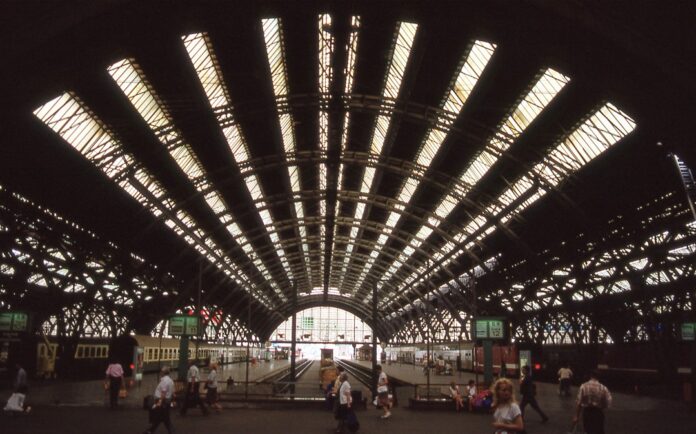 Leipzig was among the East German cities to be visited in 1989 during my August working holiday in the GDR, but the group excursion was cancelled without explanation while we were staying in Dresden.

A few of us in DIY mode went to the train station with the aim of buying tickets and making the short journey on our own, and the officials at the ticket window came close to complying (as a precaution, we sent one of the West Germans to do the buying so there’d be no language barrier) before thinking better of it and adamantly refusing.

Why couldn’t we go to Leipzig? We didn’t know it then, but weekly Monday evening protests were underway in Leipzig, and were starting to escalate. Perhaps the East German authorities didn’t want westerners to know, and put the word out, or maybe the railway employees just didn’t like our looks.

I finally made it to Leipzig after unification in 1991, if only for a day, and since reading Bowling for Communism: Urban Ingenuity at the End of East Germany by Andrew Demshuk, the city has occupied a new place in my consciousness. I’d really like to stay for a few days and compare locales with what I’ve read.

As an aside, this book is the subject of an episode at the Radio GDR podcast.

Bowling for Communism: Urban Ingenuity at the End of East Germany with Andrew Demshuk.

Demshuk’s narrative actually ranges far beyond the bowling “alley” set piece that provides the book’s title. Bowling “for communism” was the culmination of a story that began with the founding of the German Democratic Republic following World War II.

Leipzig was the GDR’s second most populous city, but unlike Berlin and Dresden, it escaped the war with only minor physical damage. But by the 1980s, four decades of communism had far exceeded benign neglect in terms of ravaging Leipzig’s architectural heritage. It soon became evident that the central government’s increasingly powerful bureaucrats in East Berlin were not interested in prioritizing a great degree of historical preservation, and when prestige projects were cultivated, they tended to be undertaken in the capital.

Proud of their city and its past, Leipzigers watched in dismay as the city crumbled. In addition, the GDR’s postwar housing priorities were designed almost exclusively to incentivize demolition of older housing stocks in favor of large-scale prefabricated concrete Plattenbau block developments, in Leipzig’s case both inside and outside the ring road circling the historic city center.

Leipzig had the added misfortune to be located in the middle of huge deposits of down ‘n’ dirty lignite (“brown” coal), the GDR’s chief energy source, which were close to the surface and could be cheaply extracted by open-cast ‘strip” mining. By the time the GDR folded, the destruction had reached the outskirts of Leipzig and threatened to displace whole neighborhoods, and mining, along with power plants and other industries dependent on coal, contributed to the city being one of the country’s worst polluted.

During the GDR’s first 30 years of existence, areas outside the showplace East Berlin vicinity evolved various ways of coping with the system’s shortcomings, while refraining from overtly criticizing communism. In fact, Demshuk describes a great deal of resentment not against the country’s ideals, but its politicians and bureaucracy. Some of Leipzig’s own city officials and urban planners began work-arounds in an effort to do their job, on the ground, where they lived and worked.

Bizarrely, the GDR’s central government often tacitly condoned the existence of a black market in building supplies, insofar as “private” initiative made housing repairs, achieving what the regime couldn’t or wouldn’t do. There was a method to this seeming exception to the rule, as ordinary folks with full-time working existences both on and off the clock would be kept too exhausted to differ with the regime, and naturally, the Stasi might elect to crack down at any time. Still, the black market flourished, and bowling couldn’t have come to Leipzig without it.

Leipzig’s subterranean “luxury” Bowlingtreff venue came about as a community-based response to all these mounting frustrations. Local officials found money by hook or crook, ordinary people offered volunteer labor, and the entire project was shielded from scrutiny from Berlin until it was finished in 1987.

This well-intentioned idea was to prove that loyal citizens in the hinterlands could have nice things, too, but the aura didn’t last long. If local action was required to produce such results, the central government was superfluous at best, and at worst, an impediment to progress of any sort at worst. And, besides, if it was necessary to mobilize such a herculean effort to rehabilitate a single structure into an entertainment center, when the capitalist West effortlessly had them by the hundreds, then what was the point?

By the time those peaceful Monday evening protests got underway, led in part by a handful of religious leaders who’d managed somehow to save and repair their churches in spite of repression, the Bowlingtreff was already ancient history, reclaimed from excellence by the usual hidebound suspects. The success story of Leipzig since unification, which came not a moment to soon to save key elements of the city’s architectural legacy and is on brilliant display in the above video, did not embrace the still empty Bowlingtreff building.

In summary, I’ve read few books about the postwar geopolitical experience in eastern-central Europe behind the Iron Curtain that I’d wholeheartedly recommend to contemporary urbanists and preservationists in the Louisville metro area. Bowling for Communism is one of them. The economic systems might differ, but the players seem much the same.

Here’s the description of the book at the Cornell University Press.

Bowling for Communism illuminates how civic life functioned in Leipzig, East Germany’s second-largest city, on the eve of the 1989 revolution by exploring acts of “urban ingenuity” amid catastrophic urban decay. Andrew Demshuk profiles the creative activism of local communist officials who, with the help of scores of volunteers, constructed a palatial bowling alley without Berlin’s knowledge or approval. In a city mired in disrepair, civic pride overcame resentment against a regime loathed for corruption, Stasi spies, and the Berlin Wall.

Reconstructing such episodes through interviews and obscure archival materials, Demshuk shows how the public sphere functioned in Leipzig before the fall of communism. Hardly detached or inept, local officials worked around centralized failings to build a more humane city. And hardly disengaged, residents turned to black-market construction to patch up their surroundings.

Because such “urban ingenuity” was premised on weakness in the centralized regime, the dystopian cityscape evolved from being merely a quotidian grievance to the backdrop for revolution. If, by their actions, officials were demonstrating that the regime was irrelevant, and if, in their own experiences, locals only attained basic repairs outside official channels, why should anyone have mourned the system when it was overthrown?