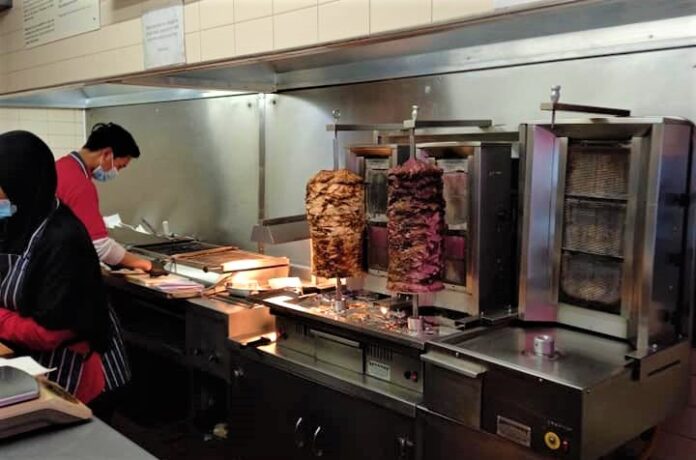 In case you missed the news, food prices have gone up.

A shocked customer bit off more than they could chew at Salt Bae’s new London outpost, Nusr-Et, after they were left with an eye-watering £37,000 bill.

Jay Rayner writes about restaurants at The Guardian, and he’s my current favorite lancer of pompous boils. As a form of “sit-down protest,” Rayner recently packed a picnic kebab to dine al fresco outside Nusr-Et. His account is hilarious.

Rather than blowing £1,450 on a steak wrapped in gold leaf at Nusr-Et Steakhouse, enjoy a gorgeous Kebab Kid kebab

A Sunday lunchtime and I am sitting outside a restaurant in London’s Knightsbridge famed for serving a £1,450 steak, eating an £8.50 kebab. I have brought my own table, chair and chequered tablecloth. It’s a ludicrous gesture, but then the Nusr-Et Steakhouse is a ludicrous restaurant, and one stupid turn deserves another. Still, I’m certain that I am eating better than all the customers through the huge wooden doors behind me, spaffing their sticky largesse over gold-leaf wrapped steaks. Because my lamb shawarma comes from the legendary Kebab Kid in Parsons Green, and very nice it is, too.

Rayner elected not to review the brand new Nusr-Et Steakhouse just to give it a right slagging; rather, noting the popularity of Kebab Kid among London’s cabbies, he surveyed the 45-year-old eatery in glowing terms, in the process conceiving his “ludicrous gesture” (bold highlight is mine).

We take another kebab to the Nusr-Et and I set up the table for my grandstanding gesture. In my more benevolent moments, I wonder whether Mr Salt Bae isn’t actually having the last laugh. Unlike the billionaire Sultan of Brunei, owner of the most recent restaurant outrage at the Dorchester, he didn’t start a rich man. He came from a poor working-class family. Now he’s rinsing the rich and stupid. It could almost be inspiring.

In this vein, Rayner concludes with a sobering point (as well as a glittering prize, but I shan’t give the joke away), referencing a 1976 “essay on the end of empires by the fabulously named General Sir John Glubb,” who suggested that “empires move from affluence to decadence easily, and then collapse.”

Exactly where are we, anyway?