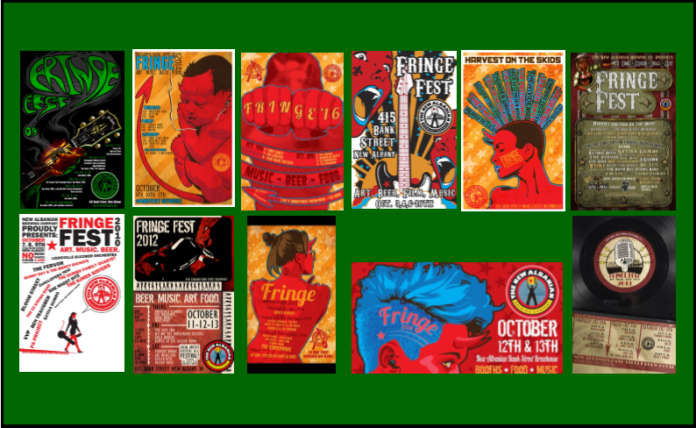 Charles Dickens anticipated the record of my working career as it pertains to the late NABC Bank Street Brewhouse (415 Bank Street in New Albany), which in 2021 became the home of Monnik Beer Co.’s brewery and restaurant.

It was all that, and so much more. But Fringe Fest is worth remembering. It was NABC’s way of participating in Harvest Homecoming, the 800-lb. gorilla that annually wags the city’s dog. The first Fringe Fest in 2008 actually took place in the gutted former Rainbo “day-old bread” store structure and its adjacent, vacant parking lot, a full five months before the first day of business for BSB.

A friend’s Boy Scout troop sold burgers and hot dogs, and NABC beers were dispensed via a cold plate. In 2009 and 2010, we made massive investments in a “big top” with musical entertainment, thus learning a hard lesson: when the weather is nice in early October, no one likes to be inside a tent, and when it’s cold and (especially) rainy, no one shows up at all.

Subsequently Fringe Fest was scaled down and met with greater recognition. My business divorce became final in February, 2018, and there was a final Fringe Fest that same autumn before my ex-business partners pulled the plug first on the festival, then the business as a whole.

Losing Bank Street Brewhouse was hard for me, but every Napoleon has his Waterloo, and starting over at NABC’s original Pizzeria & Public House was the right thing for them to do. It’s a genuine regional icon, and they’re making gradual upgrades toward what I hope will be decades of productivity to come.

Returning to Fringe Fest, profits may have been elusive, but if there’s any such thing as a moral victory to be experienced in trickle-down capitalism, then our counter-cultural gala during Harvest Homecoming may well have been an example of it.

Nothing is perfect. However, nowadays during Harvest Homecoming, year-round bricks and mortar downtown businesses in New Albany have a better chance than ever before of fitting into the melee, and Harvest Homecoming’s organizers now seem to have accepted the need to refrain from imposing their own business plan on daily stakeholders without involving the latter in decisions. It’s all we ever asked, and I’d like to think our fringe advocacy had a little something to do the favorable evolution.

Here’s a link to an article on my previous blog, at which you can see Tony Beard’s great event posters in greater detail.