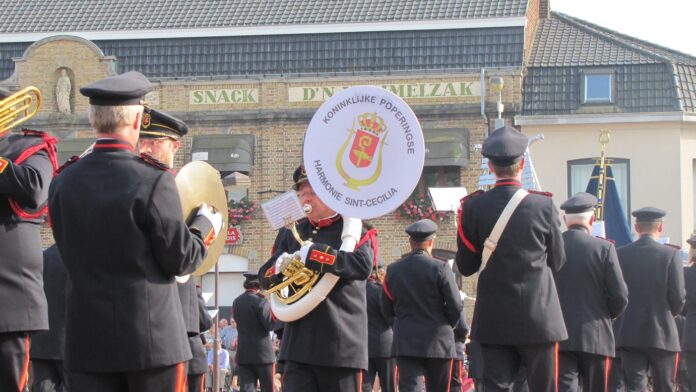 I seem to have settled on biweekly writing updates, which serve the purpose well enough. The aim is unchanged: an every-other-Sunday compendium of links here at the web site, these directing you to recent writings of mine published elsewhere which strike me as noteworthy. Most links will be to Food & Dining Magazine or the Pints&union Beer Blog, but there occasionally might be others.

Today’s cover photo was taken in Poperinge, Belgium in 2014 during the town’s triennial hops fest. In 2020, the fest was delayed until 2021, and this year it was postponed again. It isn’t known whether the town will try again in 2022, or wait to restart the event in 2023, putting it back on schedule. Either way, I’ll be doing whatever it takes to be there.

Recent posts, from newest to oldest:

Edibles & Potables: A fried chicken road trip from Serbia to Ohio: “Road trip! We’re headed to Barberton (near Akron in Ohio, USA) by way of Bela Crkva (Vojvodina, Serbia) for the express purpose of eating fried chicken. But the road is long, and the many winding turns begin in the Old Country.”

Ja, we have an Oktoberfest keg plan: “From today until the end of the month, or whenever the kegs run dry, we’ll keep two Oktoberfest-style lagers on tap. One spout is pouring American craft Oktoberfests, and the second brands from Germany (and one from Austria).”

Our German beers: Köstritzer Schwarzbier, a superlative black lager: “You can see easily enough that this 1987 label for Köstritzer Schwarzbier, produced when the brewery’s hometown of Bad Köstritz was situated in East German territory, is effortlessly throwback/retro like nobody’s business. It jumped out at me when I saw it on a store shelf in Budapest for the first and only time that very same summer.”

Hip Hops: A few instructive beers in Ostrava in 1989: “As his wife left the kitchen, Alexander leaned over conspiratorially, informing me that first, we had another important appointment to keep: ‘You must come to MY pub,’ he said, taking pains to stress a regular customer’s sense of ownership.”

Our German beers: Andechser Doppelbock Dunkel, from the Holy Mountain to New Albania: “While not an -‘ator’ like most other doppelbocks, Andechser is a fine example of the style, as brewed at Kloster Andechs south of Munich, which is known in Bavaria as the ‘Holy Mountain.’ It is a Benedictine monastery and a pilgrimage church with surrounding farmlands, the brewery and a fine restaurant, these being three of the ways the facility pays for itself and also helps to support St. Boniface’s Abbey in Munich.”

Edibles & Potables: “I’m one of your missing service workers”: “It just might be the case that amid the sound and fury of uninformed bloviation, the pandemic altered a fundamental paradigm. Wars and catastrophes generally have this sort of effect, but change is difficult even during placid times.”

Oktoberfest/Märzen/Vienna lagers and Pints&union Oktoberfest 2021: “In contemporary times, the style category that used to be broadly referred to as Oktoberfest/Märzen/Vienna has been broken down into several separate subcategories, with more than a vestige of similarity from one to the next. In general, they’ll all be malt-forward, with hops deployed for balance and not presence, usually a shade (or three) darker than the everyday lager, with a tad more alcoholic oomph.”

Vienna by way of Mexico and Louisville, or Falls City Ziegelhaus, now on tap at Pints&union: “It’s an amber lager of light-to-medium body. I recently met with head brewer Cameron Finnes, who told me he modeled Ziegelhaus after the Mexican Vienna-style lager variant: Dos Equis first and foremost, then the slightly darker Negra Modelo. In some ways, Ziegelhaus also reminds me of Shiner Bock. The immensely complicated question, then, is the extent to which these New World adaptations correspond to their Old World antecedents.”

R.I.P. Scott Hand, head brewer at Monnik Beer Co.: “Scott was far more than a skilled artisan. He was a force and a presence, a cranky and curmudgeonly polymath with an uncompromising sense of self and a commitment to truth, justice and excellence. It was impossible to have a chat with Scott and not learn something.”

Our Belgian ales: Drie Fonteinen Oude Geuze and Hanssens Oude Geuze: “Two decades ago during my tenure at the NABC Public House (formerly Rich O’s), I commenced an annual promotion called Lambic by the Glass. I’d gather a dozen or more of these obscure Belgian ‘wild’ ales, price them for single pours, and have a great evening. Of course, the very fact that we maintained a list of Lambics throughout the year, usually comprising 10-15 different brands – most of which were among the most expensive to purchase – provided abundant evidence of either foresight or insanity.”

Orpheus Brewing’s Transmigration of Souls Double IPA, in cans, right now: “As an aside, surely one of the most gratifying trends during the past decade of craft brewing in America has been the emergence of the Old South in terms of creativity and market clout. Trust me: it wasn’t like this for a very long time. But first, allow me to introduce the man who ordered the case and stocked it for your drinking pleasure.”

Hip Hops: In my cups at the very spot where the WCTU conspired: “Once upon a time in downtown New Albany, a house stood in the space between Monnik’s building on Bank Street (the former NABC Bank Street Brewhouse) and the Ricke & Associates agency to the north. If there is a photo somewhere, I haven’t seen it, although it is safe to assume an appearance somewhat like that of the Ricke house itself, or the Fox law office on the other side, probably positioned close by the street in traditional row house fashion. Before the house was demolished around 1955, it had been used for a very long time by New Albany’s branch of the Woman’s Christian Temperance Union.”