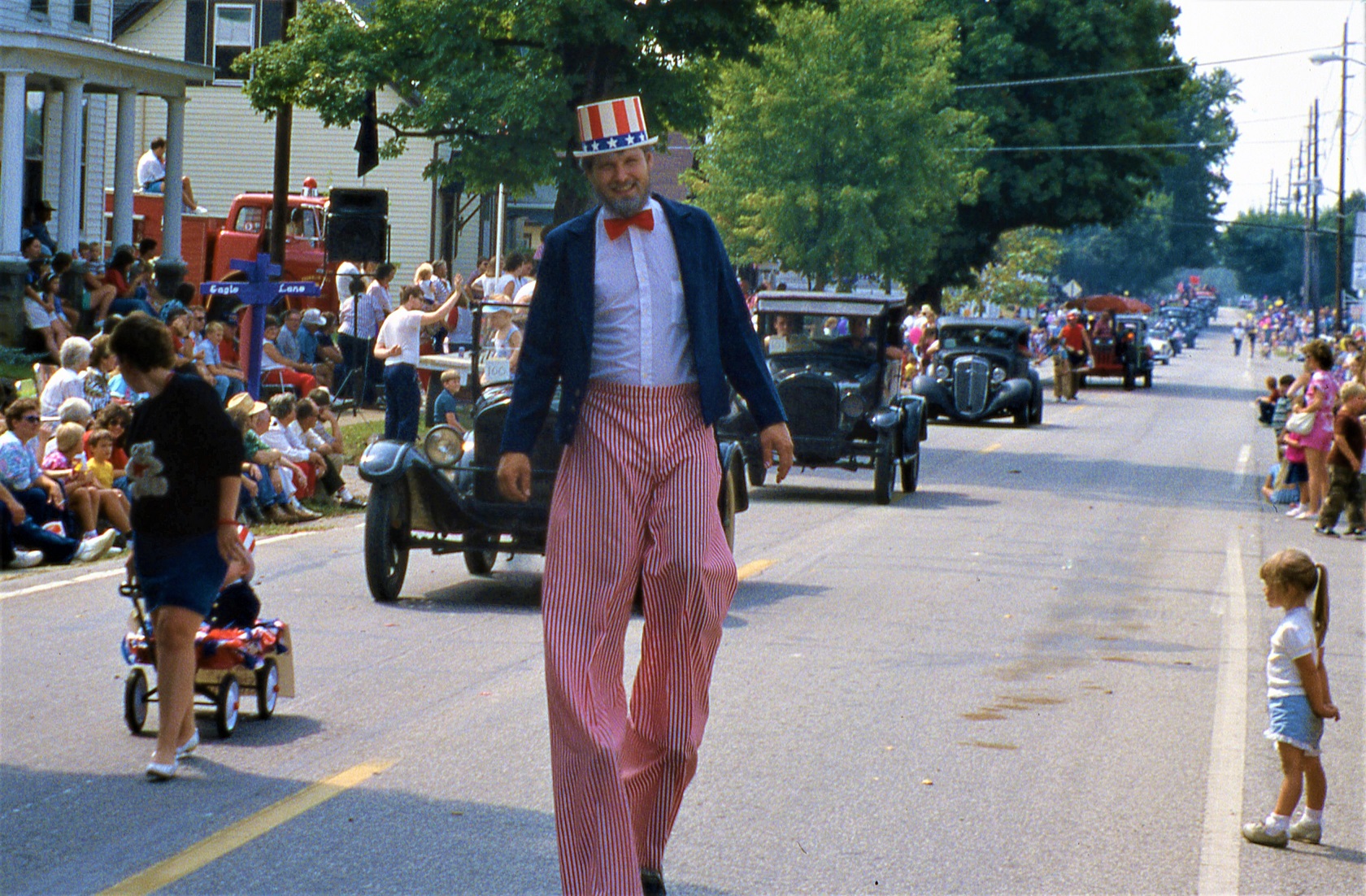 On Indiana State Road 62, the main highway through Lanesville, there stands a sturdy red barn with nicely restored Mail Pouch Tobacco advertisements on its east and west sides.

Just down a gentle slope from the barn, across the shallow expanse of Little Indian Creek, is the property where Lanesville Heritage Weekend takes place each September. This year’s renewal marks the festival’s 46th anniversary.

Nine years ago, I returned to Heritage Weekend after far too long of an absence. Some of NABC’s friends in the Lanesville Jaycees had petitioned to have a craft beer on tap, so I drove out on a warm and sunny Friday to observe the Jaycees’ beer garden setup and be sure the Tafel was ready for pouring.

I was strolling through the grounds and saw the Mail Pouch barn, perfectly framed by old trees and vintage farm equipment, the former slightly rustling, the latter purring, grinding and whirring as their operators explained to inquiring passers-by how the threshers, balers and shredders originally had been used.

The sight inspired a photo, but more importantly, it conjured a brief but gripping reverie.

I neither grew up in Lanesville nor attended school there, but you might plausibly say I was a semi-residential alien during my early twenties, never quite qualifying for a formal passport, and yet making regular trips from Georgetown across the wooded ridgelines to the next watershed situated south.

Lost in thought, I was startled back to the present by a shadow materializing to my left. It was an acquaintance from this previous transient life of mine, a Lanesville native and former star athlete perhaps six years my junior. Hoisted on his shoulder was a tow-headed, blond-haired little boy, his bright, youthful eyes locked on the nearby steam engines.

“I needed to bring him down here so he’d know what a tractor is,” he said. “Can you imagine that?”

We chatted for a bit, and then they moved on to grab a bite. It was early yet, but my reconnoitering work was finished. Veering toward Heritage Weekend’s vast grassy parking acreage to reclaim my car, I cursed under my breath as I walked, because now I’d have to lie about my puffy red eyes.

You know how it is out with those damn allergies when you’re out in the country.

I entered the 1st grade in 1966, which was the final hurrah for Georgetown High School. Grades 7 through 12 departed for consolidation at Floyd Central High School in 1967. FCHS was seven miles away from my house, but it was only three miles to Lanesville, across the county line from Floyd into Harrison, a place marked in those far-off times by the end of pavement and the beginning of gravel.

The distance was so short that the winos around the corner were able to walk to Lanesville for booze when their car wasn’t running, which was almost always. Later I occasionally did the same, for beer, even when my own car was fully functional.

My father explained it to me: Lanesville was populated by Catholics of German ancestry, and if they weren’t Catholic, they were most likely Lutheran, which was somehow different in theological terms, but meant almost the same thing when it came to drinking.

Conversely, Georgetown had “too damned many” (his words) Baptists and Methodists, some of whom were teetotalers. For the ones who didn’t abstain, refuge for discrete tippling could be found in places like Lanesville, away from prying eyes.

As a teenager, summers were for riding bikes and playing baseball, and we often played games at Lanesville High School’s ball field. On a couple of occasions, I rode my bike to the ballgame.

The fact that Lanesville had a high school at all was testament to stubbornness, pride and grit. Famously, the town had resisted the push to consolidate, and its school remained a community focal point.

Back then I never thought about it much, and yet the older I got, the more Georgetown seemed to fade from view, while Lanesville remained far more interesting to me. I made friends in Lanesville, dated a gal from Lanesville, and learned there were Lanesville taverns ready and willing to serve me long before I was 21 years of age.

Let’s hope the statute of limitations has expired.

There also came a dawning realization that Lanesville’s attraction to me was at least in part because the town seemingly stood for something, and the town stood for something because it retained a sense of place – and Lanesville retained a sense of place in large measure because it still had its school, as well as an annual festival called Heritage Weekend.

For starters, the very concept of “harvest” bears somewhat less meaning when tied to an urban area dotted with supermarkets and plagued to this very day by mall envy, as opposed to corn fields with cattle grazing nearby.

Furthermore, New Albany’s “special” fest time always was referred to as a “homecoming,” as opposed to “heritage,” and in my reading, this terminology implicitly acknowledged an awkward yet fundamental reality: In a form of decades-long unstaunched bleeding, the city’s best and brightest sons and daughters usually were compelled to move elsewhere in the nation to live and work.

They’d return to New Albany during Harvest Homecoming to catch up – spend a few dollars, drink a few beers, notice (or not) what’s changed (or hadn’t) about downtown behind the booths – then head back to Boulder, Asheville or San Jose before it becomes too obvious why they’d left town in the first place.

Lanesville’s annual fete not only chose “heritage” as a tag line, but from the start, actually meant it.

Heritage Weekend began as a one-off U.S.A. Bicentennial event that morphed into a legitimate trend, genuinely reflecting the town’s heritage by using the past as an educational and demonstrative springboard to the present, and perhaps even the future.

Heritage Weekend invariably reminds me of the triennial hop festival in Poperinge, Belgium, where almost every townsperson is involved with the pageantry. As in Poperinge, the message is inescapable: Lanesville may be small, but its common denominator is high.

No, Lanesville isn’t where I’d want to live, at least not any longer. Europe changed me for keeps, and it’s doubtful I’ll ever change back. Besides, New Albany’s where I’d rather stay, and hopefully finish what we’ve started here, in spite of the many spiteful obstacles.

But my respect for Lanesville and the folks who live there is genuine and sincere, even if I’ve failed to return to their Heritage Weekend since that beautiful day in 2012.

It’s hard to explain. Lanesville obviously is a real place, although in my mind’s labyrinth, it has become a parallel universe that surfaces every now and then. When it does, I must address the gremlin on my shoulder. Lanesville is what I’d likely have been, had I not become what I am. Maybe it would have been possible to have it both ways, and even more likely, it doesn’t matter one way or another. Yet the nostalgia can ache, and at times it’s too much for me.

But there are no regrets. I’m where I should be. I definitely harbor warm feelings about the people and things that went before. Once I was there, now I’m not.

Live in the present. Just don’t forget the past.