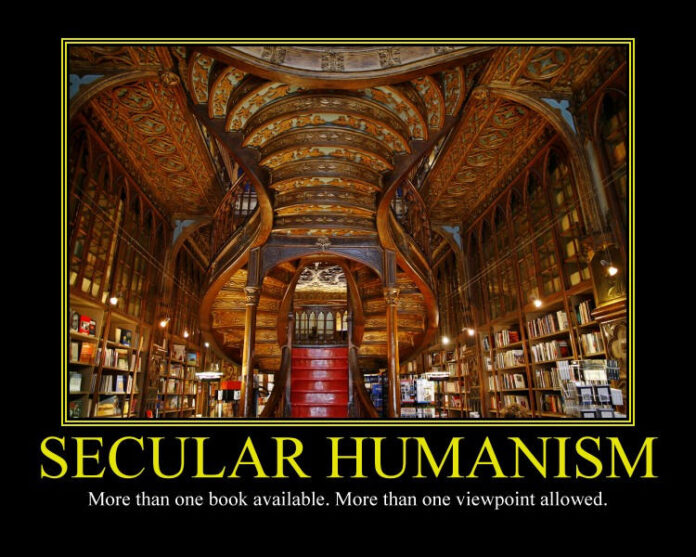 Apart from Friday afternoons each week when the News and Tribune treats us yet again to not one but two evangelical Christian guest columnists, one of whom (Tom May) even gets a second column slot elsewhere during the to cagily proselytize again — May possesses the incriminatory photos, I presume — it doesn’t seem necessary for me to wear secular humanism on my sleeve, and in fact I enjoy making taunting references to the need for a “Pagan Life” column for the sake of equal time.

The publisher of the News and Tribune ignores my suggestions, but he’s a few counterweights short of a screw press.

In the final analysis, I suppose that “secular humanist” summarizes me as well as anything else, and while there is an American Humanist Association, these days I lean strongly toward the sentiment expressed by Groucho Marxist: “I don’t want to belong to any club that will accept people like me as a member.”

Wikipedia offers this description of humanism, which is the sort of “equal time” alternative that a truly fair-and-balanced entity like our local chain newspaper should offer, although on second thought, maybe the Alabama state pension fund prohibits it.

Today humanism may refer to a nontheistic life stance centered on human agency and looking to science and reason rather than revelation from a supernatural source to understand the world. Humanists tend to be strong advocates for human rights, free speech, progressive policies and democracy. They maintain that religion is not a precondition to morality and object to religious involvement in education and the state apparatus. Humans, according to humanists, can shape their own values, and live a good and meaningful life.

I’ll continue giving the News and Tribune a hard time about those two weekly slots for religious advocacy — or, approximately two times as many as are justified.

Certainly the best idea I ever heard for an “equal time” column was the estimable Goliath’s pitch for a pagan, atheist and humanist food column. I’d actually come out of retirement for this. C’mon, Bill; I’m tanned, rested and ready, and unlike Nancy Kennedy, I actually reside hereabouts.

Each week, I’d begin by refuting a theist’s fallacy, end by laughing at an effigy of Ken Ham, and fill space in between with tips on how to make the perfect Reuben sandwich out of leftover Tex-Mex scraps, or use Bud Light to shampoo your dog.

But no. Creativity crawls off to die a miserable death, trampled by someone speaking in tongues and we get the same dreary inspirational tracts. Why? In the customary absence of newspaper management participation on Twitter in any substantive give and take, one of the reporters offered this in 2017 (yes, it’s been going on THAT long):

I’d rather go to Alabama with a banjo on my knee. It would do me just as much good, given this level of institutional bias against pagans, humanists and food worshippers.