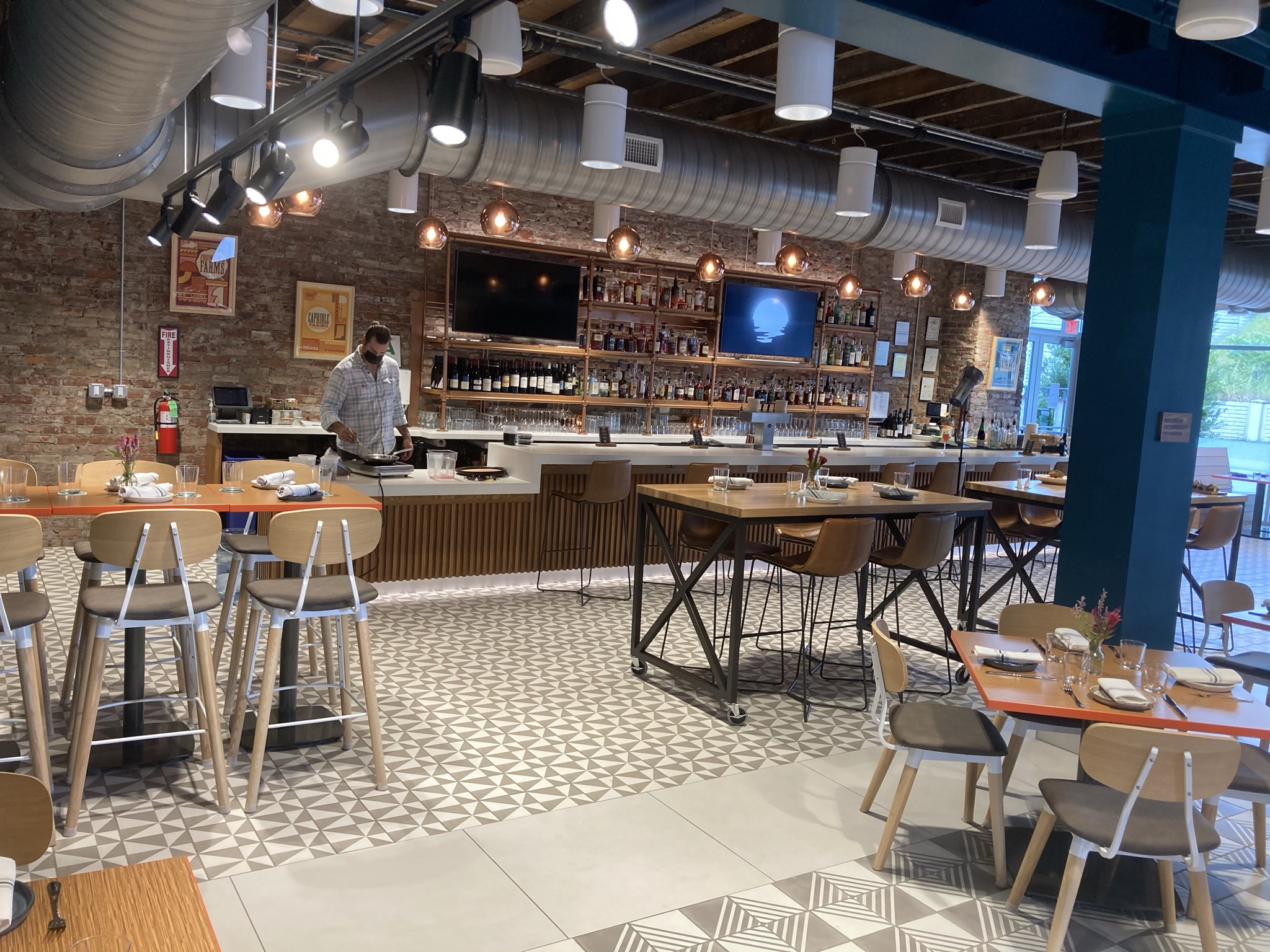 Yes, I know, these updates haven’t been weekly, but every other week seems to serve the purpose well enough.

The aim is unchanged: a Sunday compendium of links here at the web site, these directing you to recent writings of mine published elsewhere which strike me as noteworthy. Most links will be to Food & Dining Magazine or the Pints&union Beer Blog, but there’ll occasionally be others. And, “recent” is likely to be defined somewhat loosely.

Today’s cover photo is the bar and dining area at Everyday Kitchen in Louisville, which is the subject of a profile I’ve written for the forthcoming edition of Food & Dining. Here’s an introduction.

These include the aforementioned Clever Moose Cafe and Everyday Kitchen, where Executive Chef Mike Wajda (VYE-da) and his team provide meals and drinks not only to the general public, but for anyone involved with Lodgic who happens to be hungry.

Recent posts, from newest to oldest:

Edibles & Potables: “For a time, eating and relaxing among the dead was a national pastime”: “Happily, with some effort and forethought, my tight budget did not preclude a decent quality of life in Rome. So it transpired that one day I purchased a pork sandwich, a pastry and a beer, packed them into a plastic bag, and hopped the subway, then a bus, to the Appian Way for a walk.”

Our Belgian ales: Saison Dupont’s story begins with Hainaut geography: “Dupont’s farmhouse imagery is both a forerunner and a yardstick. It dates from the 1920s, although the ale was brewed in varying forms long before that, and it remains pointed at the center of the target, with a disarmingly simple recipe.”

Our Belgian ales: Life creates itself in (Delirium Tremens) and is undone in ennui: “My first visit to the Huyghe brewery in a neighborhood of Ghent, Belgium came in 2000, and it was one of the finest such “tours” I’ve ever experienced, anywhere, although this wasn’t immediately apparent when we stepped through the door.”

Our Belgian ales: Got wood? Duchesse de Bourgogne and Rodenbach Classic: “Specifically, we’re here to introduce two examples of West Flanders Red from Belgium, which begs a question of its own: Is there a difference between Flanders Red and Oud Bruin? The answer is not at all clear.”

Our Belgian ales: Gulden Draak, or the ale with the golden dragon tattoo: As a local history note, Gulden Draak was the first draft Belgian ale ever to be tapped at New Albanian Brewing Company’s Gravity Head; actually it was the very first Gravity Head in 1999, which came about because we we were celebrating the inauguration of a walk-in cooler and twelve new draft lines.

Hip Hops: Like I was saying, Oktoberfest in July, Halloween in … January?: “Dissonance is forever afoot, and the struggle is real when it comes to seasonal beer style creep. Why have literally dozens of Oktoberfest lagers and pumpkin-influenced ales already started to appear on package store shelves and at your favorite local tap house? Why were some of them there as early as mid-July?”

Edibles & Potables: The encroachment of QR-coded dining: “Let’s keep it brief this week and focus on an arguably unanticipated outcome of the COVID pandemic; not rampant societal incivility, but the disappearance of restaurant menus.”

Our Belgian ales: the devil went down to Breendonk (Duvel): “Brewing Duvel requires a warm initial fermentation, long periods of both warm and cold maturation, and then a final charge of sugar and yeast for bottle-conditioned carbonation. Duvel set the template for strong golden ales in Belgium, and imitators have long paid homage by naming their products after the devil (Lucifer, Satan, etc.) as a form of tribute (to Duvel).”

Our Belgian ales: La Chouffe, preferred choice of Ardennes gnomes everywhere: “As it turned out, the date of our visit was September 11, just a year after the 9-11 terrorist attacks. Chris Bauweraerts, then the co-owner of the brewery with his brother-in-law (in 2006 they sold the brewery to Moorgat, owner of Duvel) had agreed to meet us and conduct a tour even though the brewery was closed that day. We entered the brewery building, and Chris asked for a moment of silence in memory of 9-11, followed by an amazing story.”

Our Belgian ales: St. Bernardus, brewer of Abbey ales (and a tasty Wit): “The St. Bernardus brewery is located outside the town of Watou, just down the road from the rock star monks who make the renowned Westvleteren Trappist ales. In its previous incarnation, from 1945 through 1992, St. Bernardus (a purely secular brewery) produced a version of Westvleteren called St. Sixtus, under license from the monastery.”

Our Belgian ales: The Trappists (Chimay Blue, La Trappe Quadrupel, Orval and Rochefort 10): “Old time religion suits me, so long as it’s observed according to the Trappist-style. Speaking as a bibulous iconoclast, few joys compare to reminding faith-based American teetotalers that monastic orders have been making beer, wine and spirits in the Old Country far longer than their various modern nations have existed.”

Hip Hops: News of the Beer (with requisite editorial commentary): “Not a day passes without your faithful columnist, a native of Floyd County (and long-suffering resident of New Albany), doffing his chapeau to the fact that six breweries now operate there. Amazing. Add to these a hop farm, Knob View Hops, which is the subject of an excellent extended profile in the local newspaper. All we need now is a barley grower, an artisanal malthouse to prepare the harvest for use in the brewhouse, and maybe a monastic brewery located up the hill at Mt. St. Francis.”