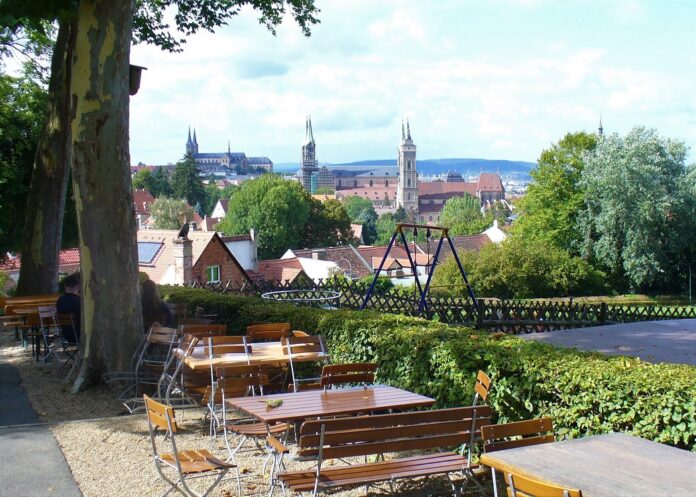 Yes, I know, these updates haven’t been timely.

Still, it is my aim to post a Sunday compendium of links here at the web site, these directing you to recent writings of mine published elsewhere which strike me as noteworthy. Most links will be to Food & Dining Magazine or the Pints&union Beer Blog, but there’ll be others. And, “recent” is likely to be defined somewhat loosely.

Today’s cover photo is of the view from the Spezial Keller in Bamberg, Germany. It’s perhaps my favorite beer garden in all the world.

Edibles & Potables: Meat pies, locust beans, posset, and various other enticements: “Many years ago when I was traveling in Europe as a budget-conscious backpacker, street food was an option generally preferred to sit-down meals, which were reserved for special (read: more expensive) occasions.”

Hip Hops: What’s Alt, doc? Akasha’s new beer, that’s what (and a 1995 flashback): “In truth, what the world blithely assumes about German beer primarily centers on two facets: Bavarian fest lore and modern pilsner-style know-how. Nowadays Kölsch (from Cologne) has become more common, but Berliner Weisse remains confounding to anyone who dons Lederhosen as a prerequisite to consuming tankards of Helles alongside voluminous roasted hog parts. In short, Altbier is rarely seen outside its home city.”

Creole Restaurant on Southside Drive, with Haitian and Caribbean food: “Diaspora is defined as ‘the dispersion of any people from their original homeland,’ and since 1990 the Haitian immigrant population in America has more than tripled in size. Given Haiti’s history of French colonialism, it comes as no surprise that Haitian Creole is a French-based creole language; the word creole meaning ‘of mixed European and black descent, especially in the Caribbean,’ and applicable to human beings themselves as well as aspects of their culture.”

“Louisville is the intersection of all America”: “I needn’t recap Louisville’s numerous socio-economic, political and social justice issues. They mirror America’s, and my country has has some explaining to do, but that’s grist for other mills. The gist of it? I’ve lived in this area for my entire life (today is my 61st birthday), and the reason I’ve roamed far and wide, and yet always returned home, is that home turns out to be a good place to live.”

Hip Hops: Keg Liquors changes owners, plus a round-up of local beer news: “It should be noted that The Keg was owned and operated in Clarksville by the Antz family for decades (as founded circa 1970) prior to Todd Antz returning home to assume control. Not only did he rebuild the original location on Lewis & Clark Parkway from the ground up — literally, with a whole new structure — but also installed a focus on craft and imported beers as the store’s specialty, then took the concept to a second site in New Albany off Charlestown Road.”

Edibles & Potables: Weaponizing Yelp reviews for use in the culture wars: “It’s a short sidestep to the genre of food and dining (lower case) reviews. To me, it’s relatively simple. Knowledge, experience and objectivity enables one to pass judgment, and given the widespread absence of these qualities, crowd-sourced ratings and reviews are largely bunk. It also helps to eliminate malice. Unfortunately, malevolence currently is trending in America.

Hip Hops: Beers by the light of day: “Just after lunch, we rode into a small town with a railhead where we intended to hop a local train for the last few miles into the city of Tulln, situated on the Danube. But first there was the not-so-little matter of a much needed rest period, and restorative food and beverages: A bowl of goulash, a couple of lagers and some vital post-ride commentary and analysis.”

Draft report: Fuller’s ESB and AVBC Cherry Gose are now on tap: “On Saturday a long-overdue event took place when we tapped a keg of Fuller’s ESB for the very first time at Pints&union. Yes, this ale has been pouring at the Irish Rover since the 1990s, but for some reason Fuller’s has tended to be problematic in terms of availability in Indiana.”