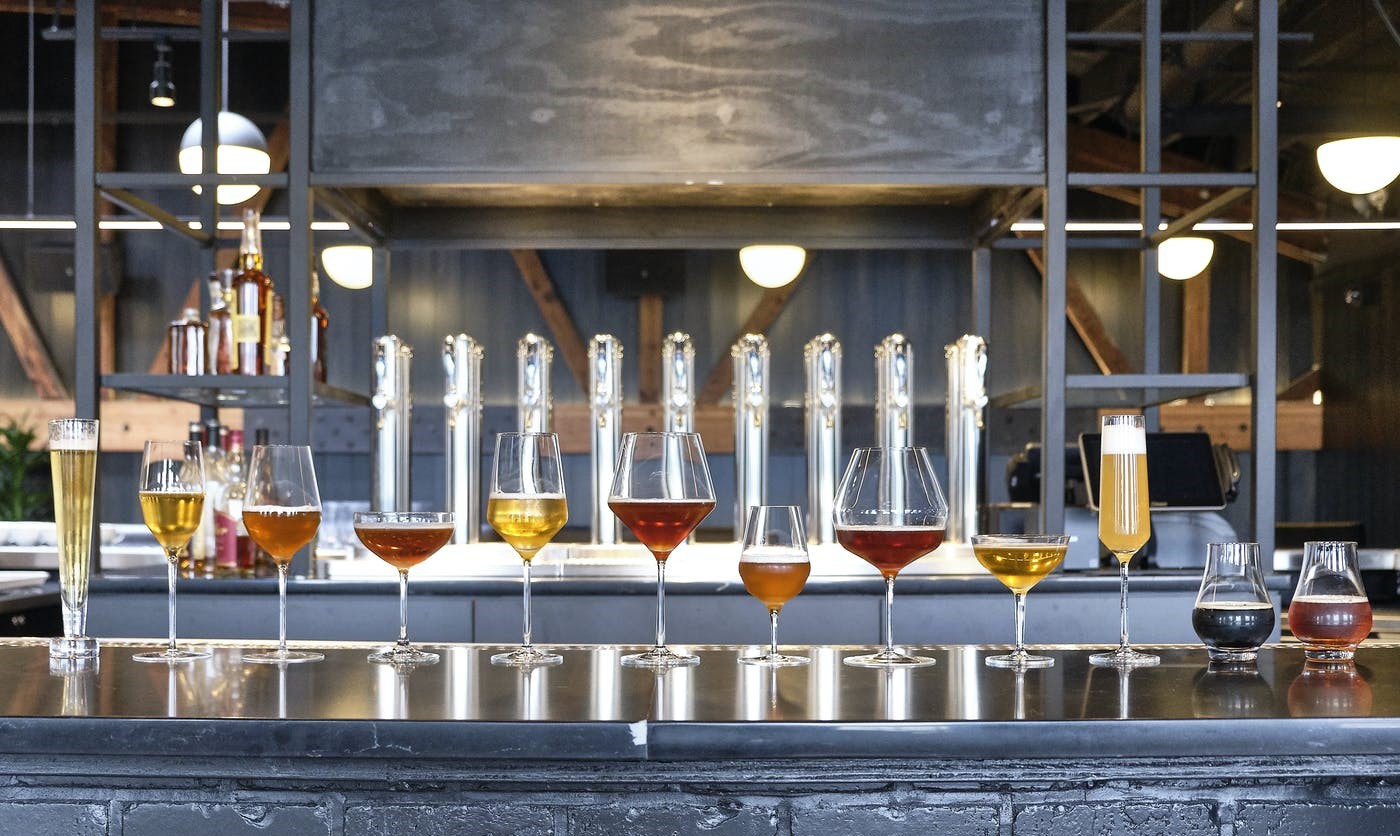 At Moody Tongue, our goal is to create thoughtful, exciting beers that blend familiar flavors with quality ingredients through our philosophy of culinary brewing: using a chef’s mindset to highlight flavors and aromatics in balanced beers.

On Wednesday evening there was a stellar beer dinner at The Exchange in New Albany, or more accurately, at the Tavern Hall events space in the adjacent/adjoining building that formerly housed Feast BBQ. It was my first time inside this area, and it’s a fine upgrade (there’s an airbnb apartment upstairs, too).

Brad Davis of Chicago’s Moody Tongue Brewing led the discussion, joined by Craftroads Beverage’s Ryan Gates. I was lured from the recliner by my good friend Mark Cassidy, who invited me in honor of my forthcoming birthday. Pints&union’s general manager Steven Cavanaugh also was in attendance with his fiancée Natalie.

It’s been a good while since I attended a beer dinner, perhaps in late 2018 or early 2019. What’s more, I have been largely foregoing red meat and fowl in 2021, and the pièce de résistance for the Moody Tongue evening was a big quivering hunk of beef. Finally, and a tad ruefully, my tolerance for alcohol has dropped precipitously. All these factors combined to produce a vague uneasiness in the run-up, but fortunately as a trained professional I was able to overcome these doubts and over-indulge just like oft times before.

So, what exactly a “moody tongue”? According to the brewery’s founder, brewer and resident guiding light Jared Rouben, the phrase describes someone with a discerning palate. Armed with the mission statement noted above, Rouben’s brewhouse produces what I’d consider discerning beers. Overkill is absent, and a guiding intelligence is evident. As you might recall, I’m a fan of attributes like these. 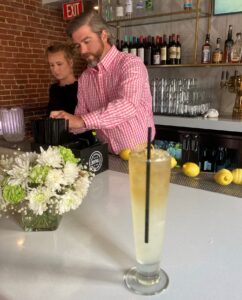 The Exchange’s beverage director Zach Ruoff created a great shandy to begin the evening, an especially appropriate concoction coming on the heels of 90-degree+ daytime temperatures on Wednesday. I caught some Pilsner’s hops in the nose; speaking truthfully, the shandy was consumed rather quickly, so a more detailed consideration isn’t possible. 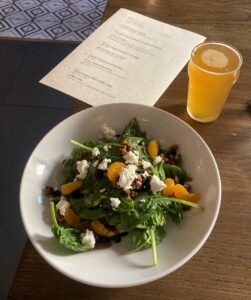 As Brad observed, there is no lemon as such in Moody Tongue’s Lemon Saison. I asked him about the hops, and the reply was precisely as I’d expected: Sorachi Ace, a Japanese variety known for their lemony character. I can recall Brooklyn Brewery’s pioneering use of Sorachi Ace, and it’s interesting how flavors and aromas from long ago remain even when you forget things that happened two days ago. 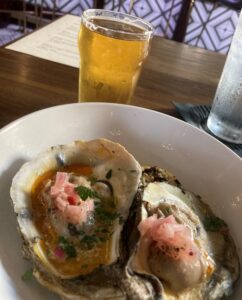 To me, the highlight of the dinner. Togarashi is a Japanese spice mixture including seven spices, among them chili peppers, sesame seeds and ginger. Mark isn’t a fan of oysters, but he loved this preparation. So did I, remarking that in retrospect, a dozen of these grilled oysters along with a couple pints of Moody Tongue’s subtle but memorable Toasted Rice Lager would have in themselves made for one helluva beer dinner. 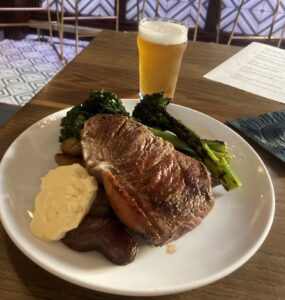 Lychee is a tropical fruit grown commercially in China, Vietnam and Cambodia, with a flavor typically described as reminiscent of strawberries and watermelon. The most important part about the use of lychee in this particular IPA is that it wasn’t used at all; far too expensive, according to Brad, who attributed the lychee character to brewing expertise alone. As with the lemony Saison, it strikes me as perfectly sensible given the exponential growth of “juicy” hop varieties and the range of fruitiness capable of being achieved through fermentation temperature. Still, I’ve never eaten lychee and cannot judge definitively. The steak was medium, the beer was in the butter, and the fingerling potatoes were delicious. The only bad news? This course effectively put an end to my evening’s consumption, because I was FULL. 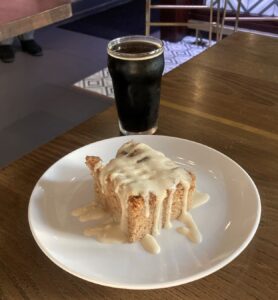 I tasted the cake and the (pastry) Imperial Stout, and both were excellent, but that’s all the damage I could do for the night.

You’ve no doubt noticed from the photos that The Exchange’s approach to this beer dinner was to provide pleasingly ample portions, and there was a time when I’d have breezed through them and had more beer as a nightcap. No longer. Also, no regrets for busting the diet and trying.

Kudos to Moody Tongue and The Exchange for a satisfying and informative evening. It really was impeccable all the way around. “Culinary brewing” might easily be a meaningless term, but food and beer pairings like those offered on Wednesday night vividly illustrate its truth. Beer dinners don’t always mesh so well. This one did, and I’m happy Mark suggested going.

Cover photo: Moody Tongue’s joint in the City of the Big Shoulders.