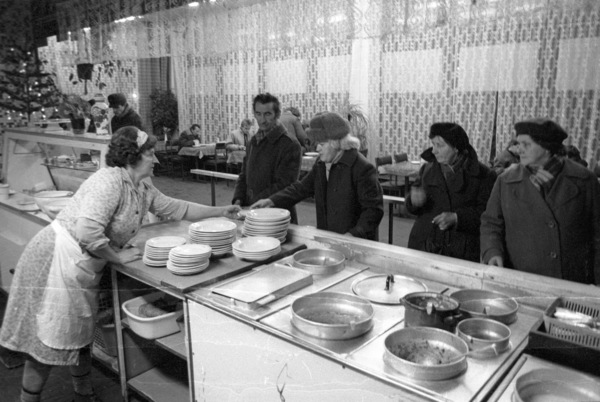 Henceforth it is my aim to post a Sunday compendium of links here at the web site, these directing you to recent writings of mine published elsewhere that strike me as noteworthy.

Most links will be to Food & Dining Magazine or the Pints&union Beer Blog, but there’ll be others. And, “recent” is likely to be defined somewhat loosely.

Today’s cover photo depicts a “milk bar” in Poland during the communist period. In essence, milk bars were inexpensive workers’ cafeterias, and still exist today in Poland as subsidized by the government so that everyone can afford a good meal.

Edibles & Potables: A communist-era tramcar snack bar in Gdańsk, and more on Polish cuisine: “Finally in the fall of 2018 we managed to get away, spend a week in Gdańsk and experience the European Solidarity Center, a museum, library and memorial located adjacent to the famous shipyard gate. I was transfixed by the history, the hospitality … and especially the food.”

AtG A Beer + Union Smashburger = your Louisville Burger Week at Pints&union: “True, this has nothing to do with A Beer, but at times you’ll be compelled to groan your way through my personal chronology. This is one of those occasions, although it’s a really wonderful song in the American Swing vernacular.”

Hip Hops: Archie’s axiom — or, beer’s ephemeral nature: “It’s an indelicate proposition today at Hip Hops, and the faint of heart may wish to turn away, but in the end old man Bunker was absolutely right. Beer is a rental, and beer drinkers have a vested interest in understanding the rules of the return policy.”

The quest for The Grales begins tomorrow: “The comeback so many of us have been waiting for begins outdoors with THE GRALES sommergartenparty, launching in the gralegarten on Thursday, July 15 (tomorrow) and runs through August 8, Thursdays through Sundays only, from 5:00 p.m. to 10:00 p.m. (enter through the side gate at 1001 Baxter). For beer lovers, two words will suffice: Kölsch Service.”

OEC Brewing’s Coolship Lager is on tap, but what does OEC mean?: “Let’s learn about OEC, starting with the name: ‘Ordinem Ecentrici Coctores = Order of the Eccentric Boilers.'”