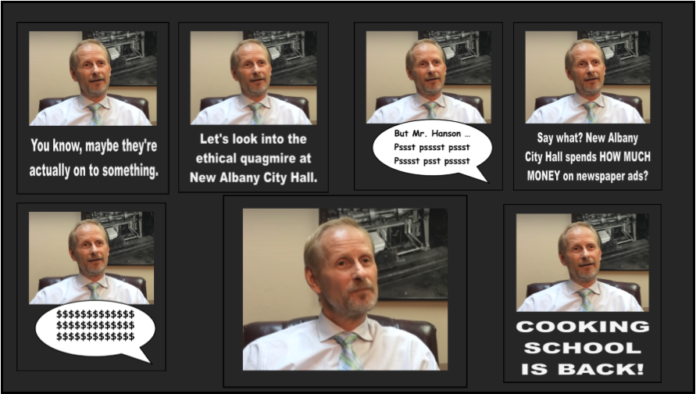 Let’s begin by defining our terms for those just tuning in.

The News and Tribune (N&T) is a six-day (Monday through Saturday) daily newspaper serving Clark and Floyd counties in Indiana. It is owned by Community Newspaper Holdings Inc, and based out of Jeffersonville, Indiana.

As an aside, CNHI is an investment/appendage of the Alabama state pension system, which accounts for the preponderance of Bobby Jones golf course ads in a Southern Indiana newspaper.

There’s a new editor at the News and Tribune, with Daniel Suddeath replacing Susan Duncan. A few days ago Duncan offered an upbeat assessment of her tenure.

I could not have come here at a more tumultuous time. As I arrived in mid-2016 the national campaign for president was at a fever pitch. It got hotter. I wrote several editorials questioning Donald Trump’s fitness for leadership and penned an endorsement of Hillary Clinton for president.

She lost, he won, and I gained instant “you’re nuts, lady” status, as shared by a man who sat in my office evaluating my fitness for the job.

I know it’s hard, but for a moment ignore Duncan’s choice of candidate for national office. The overarching point is the word “national,” as opposed to “local.”

We don’t do it for the pay, but for the benefits. The compensation of sleeping well — when you get the chance — knowing you’ve done your best to try to make the world a better place. “A bunch of do-gooders” is an apt description of journalists, though too often the phrase is spoken with disdain.

Mostly, we are historians and storytellers.

Depending, of course, on editorial decisions governing the history to be examined and the stories to be told.

Unless espousing an opinion through a column or editorial, we have no interest in taking sides, but strive to be thorough in our information giving, providing context that enables readers to draw their own conclusions.

The N&T has an editorial board, so we’re to surmise that an opinion expressed in an editorial represents that of the newspaper itself, arrived at via discussions and a weighing of various viewpoints.

Consequently, it is fitting and proper for a newspaper to hold editorial positions, and for these to be consistent over time. It also stands to reason that since a newspaper like the N&T has the daily mission of covering news occurring in a relatively small geographical area (primarily Clark and Floyd counties), the gist of its editorial policy would ideally pertain to its daily coverage area.

And, accordingly, that the newspaper’s roster of columnists, who offer “opinions,” would be balanced with regard to its composition. In short, when it comes to columnists, the desired composition would be a multiplicity of opinions, with readers left “to draw their own conclusions,” while editorially, the board would advance the opinion of the newspaper itself, as Duncan did with an endorsement of candidate Clinton.

To me, the biggest consideration is this: if the newspaper is willing to take sides nationally, it seems that it would do so locally, as well, given that “local” is what the newspaper is doing on a daily basis.

Interestingly, Duncan also had the byline for Suddeath’s introduction as editor, providing a glimpse of what it’s like to write about yourself from a third-person point of view.

Suddeath has been chosen to succeed Editor Susan Duncan, who is retiring. He is currently the newspaper’s senior reporter, but his is a name familiar to readers, as he first came to Southern Indiana in 2008 … After Duncan advised of her pending retirement, Hanson and CNHI, owner of the News and Tribune, undertook a nationwide search for a replacement.

At this juncture the publisher, Bill Hanson, is quoted.

The publisher selected Suddeath as editor, in part, because of his extensive knowledge of Southern Indiana and the issues important to the region. “Knowledge is power, and that’s one of Daniel’s top strengths,” Hanson said. “He knows people who are newsmakers, and having that vast little black book, if you will, gave him a leg up on anyone who applied for the job.”

Did you know that the late Gordon Jump, the actor who portrayed Arthur Carlson on WKRP in Cincinnati, also played the lonely Maytag repairman on TV commercials? Meanwhile, the N&T’s Hanson famously shorted New Albany a beat reporter during the mayoral campaign in 2015, thus depriving my city’s readers of powerful knowledge, but let’s not dwell on these confluences of historical ineptitude.

Bearing in mind that Duncan wrote this article, Hanson gives her a solid sendoff.

“What I will miss most about Susan is she is one of the best editors I’ve ever worked with,” the publisher said. “Her ability to paint pictures with words is as good as anyone I’ve seen.

“It was a great privilege when [I was] asked to proofread her content,” he said. “I made it a habit of trying to find one thing to improve on, and it seldom happened.”

Those of us who live here already understand that Hanson’s tenure at the newspaper has been catastrophic in terms of useful content, so let’s get back to Suddeath’s new job as editor.

He says good things, and as an eternal optimist I earnestly hope a new age is dawning. The problem, however, remains two-fold: the N&T is as yet a chain newspaper answering to financial imperatives from afar, and Hanson is still the publisher. But maybe, just maybe, Suddeath can become the Tampa Bay Rays of regional newspaper editors.

As he moves into the editor’s role, Suddeath said he intends to write more columns and editorials while helping out on coverage, when needed.

But here’s the Big Bang moment of all recorded local history.

Suddeath said, “Without a local newspaper there would be very little oversight of government entities.”

There’s no sense in mincing words.

If anyone reading this post can find any evidence of the News and Tribune having consistently undertaken this supposed task of government oversight during Duncan’s and Hanson’s tenures, codifying such oversight via a coherent editorial policy seeking to hold feet to the fire, then please forward it.

You might well more easily find a unicorn hiding in Hanson’s briefcase.

There has been nothing resembling “oversight” of local government units for so long that I can’t recall. Still, I’m hopeful about Suddeath’s elevation, and I sincerely yearn for him to put these words about oversight into practice.

Will Hanson allow it, convinced as he surely must be that without voluminous local government propaganda revenue (not to mention legal notices), the newspaper cannot survive?

Sorry, but I need convincing on that count.

Good luck, Daniel. You’re going to need some. Can we at least begin by doing something about the double-fisted weekend Christian fundamentalist evangelism columnists? If readers are to decide for themselves, don’t we need a counter-balancing paganist point of view?