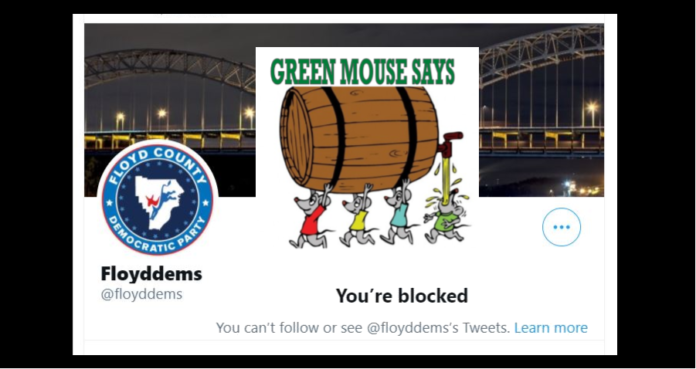 The Green Mouse has asked me to issue a clarification, re: Floyd County Democrats to hold caucus for county council seat, via the Jeffersonville News and Tribune, to wit:

“The Floyd County Democratic party has announced details of a caucus to fill the District 1 Floyd County Council seat following the recent passing of Tom Pickett, who had served since 2007.”

Fist and foremost, our condolences to the family of Pickett, who was a rare example of a local politician respected by both major political parties.

Soon the 14 DemoDisneyDixiecratic committee persons within District 1 will vote on candidates declaring for this seat, which will be contested in next year’s election cycle (it expires Dec. 31, 2022).

It has come to my attention that certain concerned citizens have been circulating a petition encouraging me to declare for this seat. There were so many signatures that they had to use the back side of the post-it note.

However, allow me to clarify: Here are the TOP TEN REASONS why I’m not seeking the county council seat.

9. That’s because I’m very busy at present with beer and food, and as yet all local political meetings are dry, although I still can’t imagine why.

8. Besides, can we really be said to possess a “democratic” party?

7. Isn’t it better characterized as the DemoDisneyDixiecrat Party?

6. What’s more, isn’t it true that the DemoDisneyDixiecrat hierarchy dislikes me intensely?

5. And, the loathing is sublimely mutual, right?

4. Sitting as a DDDP in a county government dominated by Republicans means I’d have to think for myself and act for the best interests of my district.

3. Consequently, I’d be compelled to immediately change my affiliation to Independent, which sounds like an awful amount of work just to preserve my integrity.

2. There are persistent rumors that the city council (not county council) incumbent from my district will not be seeking re-election in 2023. Given who the DDDP eventually unearths to be grandly anointed with this impending vacancy, I may be compelled to enter the fray as a spoiler.

1. Remember, I received more votes than Dan Coffey when I ran for mayor, so bugger off.

Who do you think the DDDP will select to fill the vacancy on county council?

Will it even matter next year, when the Republicans in all likelihood will clean house during the mid-term election?

Seeing as the DDDP bench is shallow, this one’s too tough to call.