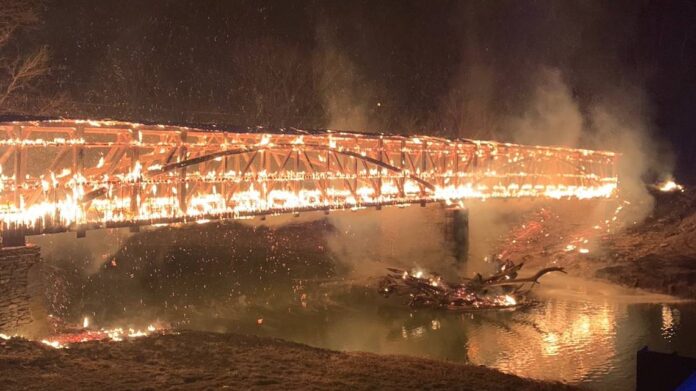 Roger, describe your relationship with City Hall in one photo or less. pic.twitter.com/7OZNAjBVAw

Twitter games amuse me at times. This one elicited a reply to the effect of “dude, it’s not like there were any bridges to burn.” That’s funny, but it’s not entirely accurate.

Yes, actually there WAS a bridge. In order to recall it, let’s everyone hold our noses and travel back through time to the year 2011, when I favored Jeff Gahan’s mayoral candidacy.

Yes, it’s true. Uncle Joe Stalin was a seminarian once, and I supported Dear Leader when he was just a glimmer in HWC Engineering’s eye.

Not only that, but Gahan actively sought my support. It took some doing, most of it on his end, because at the time he was still sore about the city council redistricting lawsuit I’d enthusiastically joined a few years before. Consequently the candidate and I had two long face-to-face chats in search of consensus, as well as at least two phone conversations.

To be succinct in summarizing the redistricting kerfuffle, New Albany’s city council districts were ridiculously out of whack in terms of size, and there had been a recent legal precedent to serve as the basis for our demands that the districts be adjusted. A federal judge ruled in our favor; it was a slam dunk, but then at the last moment our attorney, the late Stephen Beardsley, convinced us that chastened council members had learned their lesson and would do the right thing if we handed the redistricting back to it.

Narrator: They did not.

To no one’s great surprise, when any semblance of enforcement mechanism was removed, council members reverted to their respective tribes and asserted ancestral privileges, while at the same time heaping enmity on those (read: plaintiffs) possessing the gall to differ with business as usual in local governance.

The council’s “Gang of Four” merrily did the dirty work, but it seems that behind the scenes, it was Gahan who served as ringleader in the circling of wagons, having concluded  that the lawsuit was aimed squarely at him. However, three years later as a mayoral candidate, he exuded fairness and magnanimity. So long as I assured him our lawsuit was principled and not punitive (read: pointed at him), he’d graciously allow me to support him.

It transpired that then-mayor Doug England was in a mood to bizarrely self-destruct, and Gahan had only nominal opposition in 2011. He won very big, and for the first year and a half I was hopeful.

It all fell apart in 2013, as it became increasingly clear that (a) those things Gahan claimed he’d be doing, like modernizing the street grid, he wouldn’t, at least not in the same way; and (b) the patronage-first element of his reign became increasingly pronounced. By the end of 2013, the Democratic machine had initiated the process of purging me, and I was blocked on social media for publicly questioning party orthodoxy.

The Cold War was underway, but it was only much later, when I began diving deeply into the accumulated Gahan campaign finance reports, that the chronology began making sense. Basically, after raising a moderate amount of money for the 2011 campaign, most of it coming from small, traditional (and individual) local Democratic donors, the Gahan campaign ledger actually dipped into the red in 2012.

Then from 2013 forward, those small donors started disappearing, to be replaced by far larger donors with direct connections to public works contracts (most often no-bid). The campaign finance proceeds grew exponentially. It’s almost as 2012 was allowed to pass without interference from the Democratic grandees, with Mr. Gahan Going to Hauss Square and playing it straight, before they sat him down and said son, now we’ll show you how to play this game.

It’s been all about the money ever since, all about the wetting of beaks, all about a ridiculous cult of personality, and all about a tight governing clique that’s about as inbred as the royal houses of Europe prior to WWI. They rationalize it like this: But the Republicans would be worse!

Maybe, maybe not. My point: Yes, once there WAS a bridge, and to paraphrase the venerated and stone dead St. RayGun: I didn’t leave the local Non-Republican Party. It left me.