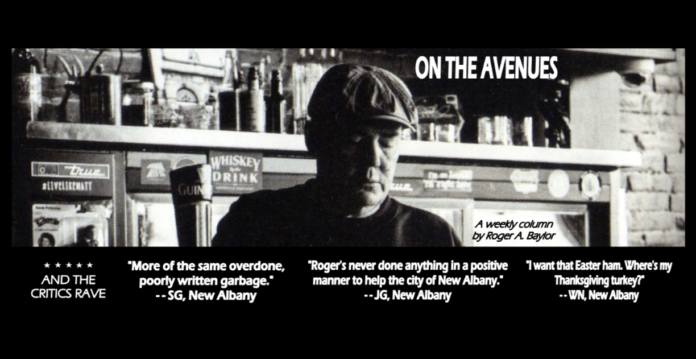 There are no hard and fast rules about mourning in America. In the beginning, we inherited primarily English customs, as embraced, modified and eventually supplanted according to the varied experiences and traditions of successive waves of immigrants arriving in an entirely new space.

For a period of time there may have been recognizable norms, but many decades of unfettered capitalist accumulation have seen the jettisoning of most remaining standards pertaining to etiquette in America, with consumer spending the cause of, and solution to, all challenges facing us in everyday life, from birth straight through to death.

And yet as time goes by, the fundamentals remain. Human beings leave this life as we began it; a member of our species, alone, unto ourselves. Those first breaths lead inexorably to a last one, and while it may seem that I’m expressing the obvious, it’s necessary to make a point about what happens during the time elapsing in between.

We become something, perhaps many things, this being a process furthered by learning, working, creating, playing and perpetuating.

I didn’t know the departed, we ask – what did he do?

In truth, neither in birth nor at death does it matter a jot whether a human being is an emperor or a sheet metal worker, and yet we still take note of these matters, enumerating them exhaustively, when the final curtain falls. It’s our way of making sense out of life’s essential senselessness.

All of these thoughts pass through my mind, over and over again, as people I know die, even as I, me and myself, remain alive to await my own inevitable turn at bat. There’ll come a time when the bell tolls for me, although these particular thoughts were occasioned by the death from cancer on June 6 of Pat McLaughlin, 64, who was the 4th District councilman in New Albany.

Who was he? What did he do?

Well, Pat was a native New Albanian, and a son, husband, father, employee and sports enthusiast. Because he sought local office, and succeeded in being elected and re-elected, he also was a politician, and this is where the complexities begin.

The profession of politics, whether practiced by small town board member or U.S. Senate majority leader, is about the accumulation of power, the uses of that power for good or bad on a multi-dimensional chess board, and power’s ultimate expenditure — unless, of course, the political capital residing in one’s wallet is reserved for a rainy day (lately around here, that’s every day).

But because political power isn’t entirely about cash, and includes highly personalized elements of persuasion and influence, political power has a shelf life, and it tends to dissipate if not exercised. As such, one brutal reality of politics is that amid the vagaries of mourning periods and burial rituals involving politicians, when they die an immediate power vacuum is created.

These power vacuums are more or less spacious in accordance with the tenure of deceased office holders, because political power typically accumulates with longevity.

There is often a perception that political power is dynastic, and of course this can be true, as with numerous Kennedys, Bushes and Freibergers. Naturally, an element of tribalism is to be expected in the aftermath of politicians passing, and party chairpersons famously abhor a vacuum. Political parties typically caucus to appoint replacements, and the newbies automatically become front-runners to contest the seat or office come the next election cycle.

So it was that the Floyd County Democratic Party caucused in early July, and selected Pat’s wife Deanna to fill his seat.

She told the Jeffersonville News and Tribune, our purportedly local newspaper, that politics never interested her all that much, but Pat insisted she carry on his work as councilman. The party chairman said others were interested in the job, but they acquiesced happily in a spirit of unity and solidarity given the circumstances.

Of course it is far too early to speculate about how any of this will play out in real time. As I was writing these words, another tragic death occurred: Tom Pickett, who sat on the Floyd County council as a Democrat. I didn’t know Pickett, who was warmly eulogized by both political parties, a genuine rarity in local terms. My condolences to his family, as well as Pat’s.

Pat McLaughlin’s career in municipal politics complicates the task of writing about him. I didn’t know him all that well, our acquaintance instead revolving around the confluence of his political role and my self-appointed position for many years as local political analyst. The places where these two roles occasionally intersected offered the opportunity for the two of us to interact.

I liked Pat as a person outside the council chambers. He was cheerful, garrulous, and as so many others have noted, the very personification of a friendly, smiling Irishman in all the purely positive ways. Even when most local Democrats were actively censoring me, Pat never did. He kept the conversation going, I think this bears noting in his favor.

Still, Pat and I had significant and abiding differences of opinion about local politics, especially policies pursued by the ruling party to which he belonged. In fact, Pat was a prime (and I might add proud) lynchpin of what I regard as a counter-productive local political machine, which I abhor, and have gone to great lengths to expose as fraudulent.

How do we reconcile these opposites? How do we mourn the dead, fittingly and respectfully, expressing our sadness at the loss of life in a universal, human sense, while retaining the ability to step back from our emotions and conduct a dispassionate quantitative survey of a political life?

I found a passage of interest in this context; it’s in 13 Secrets of Obituary Writers, by Jake Rossen at Mental Floss, which I’ll preface by stressing that I’m most assuredly not insinuating malfeasance on the part of McLaughlin or Pickett. Rather, take this as an over-arching observation.

While an obituary writer’s job is to celebrate life, that doesn’t mean they exclude the less-flattering components. When he was writing about a local politician, (journalist John) Pope discovered that he had once been to prison for misappropriating campaign funds. When he mentioned that in the obituary, the man’s daughter phoned in an uproar. “She asked why we were doing that. I told her it was because it was the truth.”

(Maureen) O’Donnell has had similar experiences. “Unfortunately, in Chicago, a lot of politicians have been investigated and convicted of corruption,” she says. “It gets reported at the time it happened and readers would have known about it. It would be a disingenuous, fraud obituary if you didn’t include it.”

I’d say that each and every one of us exhibit contradictions. Pat McLaughlin obviously was community-minded and well-intentioned. He cared deeply about where he lived. Pat got into politics because he wanted to help people, and this is indisputably noble.

However, as a politician, Pat unfortunately aligned himself with an unsavory clique of political power brokers, and assisted modes of behaviorally-challenged governance on their part which clearly are antithetical to the goals of betterment he sought.

It doesn’t mean Pat was a bad person, just a myopic one. For better or worse, he wasn’t alone in that. I’ve mourned his passing, but I also will remember his career in politics for what it was, in reality. Shouldn’t we be capable of harboring both reactions?