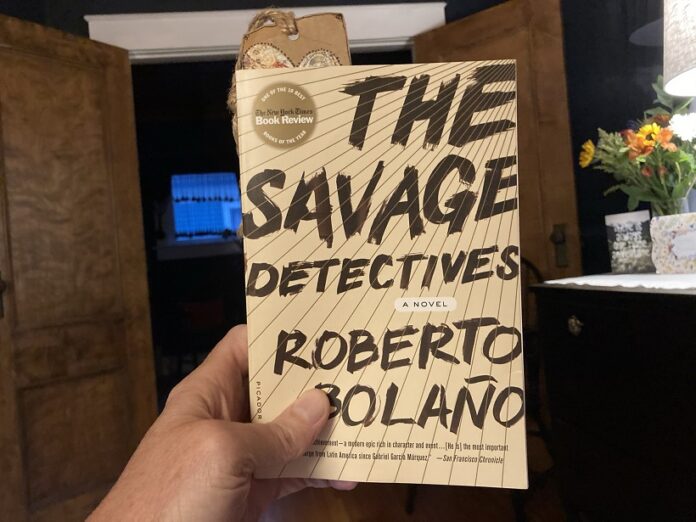 In the year 2015 I ran for mayor of New Albany. During a candidate Q & A, I became the first mayoral candidate in the city’s history to publicly admit to reading a book (2666 by Roberto Bolaño). It probably cost me several hundred votes, although to be honest, there was no way I could have won because I didn’t graduate from New Albany High School.

After all, this is the sort of place that has allowed me to joke for decades about the ordinance against five-syllable words. It isn’t true, and it’s also not really a joke, because every time I tell it, sad nods ensue.

People believe me, and who am I to set them straight?

But it’s no gag about Bolaño’s incredible novel. At a “debate” in 2015, which the incumbent refused to attend, the question was asked, “What’s the most recent book you’ve read?” I answered honestly: 2666. The Republican candidate was honest, too; he replied that it had been so long since he read a book, he couldn’t remember what it was.

I haven’t read another work by Bolaño since, until now: The Savage Detectives.

The Savage Detectives (Los Detectives Salvajes in Spanish) is a novel by the Chilean author Roberto Bolaño published in 1998. Natasha Wimmer’s English translation was published by Farrar, Straus and Giroux in 2007. The novel tells the story of the search for a 1920s Mexican poet, Cesárea Tinajero, by two 1970s poets, the Chilean Arturo Belano (alter ego of Bolaño) and the Mexican Ulises Lima.

I’m about two-thirds of the way through the novel, and find myself suitably gripped. For a more entertaining summary than Wikipedia’s can offer (excerpt above), go here.

Fundamentally, however, Bolaño’s story is about youth and the ways in which its mad delusions inevitably cede territory to the hard realities of life. In book two, the ex-visceral realist Laura Jáuregui confesses that, “The whole visceral realist thing was a love letter, the demented strutting of a dumb bird in the moonlight, something essentially cheap and meaningless.” Many undoubtedly can look back on a similar period of youthful, artistic certitude and feel empathetic and bemused by how seriously they once took themselves. “Youth” and the self-assurances and pretensions it fosters, “is a scam,” one of Bolaño’s more bitter characters asserts. For a shining and tragic cast of characters, Bolaño’s The Savage Detectives illuminates, with considerable forensic acumen, how life strips away the beautiful layers and burning certainties of youth.

Yes, Arturo’s and Ulises’ artistic “movement” is referred to as visceral realism, which is never defined but hardly needs to be. As such matters go, some of Bolaño’s more jaded fictional witnesses to poetic non-history might choose to refer to visceral realism as a bowel movement.

In this context of evacuation, it strikes me that living in Nawbany these past three decades has, itself, been an exercise in visceral realism. That’s what I never should have conceded aloud to reading a book. A better response would have been, “When I hear the word culture … I release the safety on my Browning!”

(No, Goebbels didn’t say it, and the words were misquoted, anyway; it’s a line by Nazi writer Hanns Johst in his play Schlageter. Bizarrely, I was taught English at Floyd Central Junior High School by Mrs. Janet Schlageter, and she would have appreciated my choice of reading. Did I mention that I may have lost the election, but received the greatest number of votes by a graduate of FCHS in Nawbany mayoral election history?)