In a moment, the case for removing the Providence Mill low head dam on Silver Creek, courtesy of the River Heritage Conservancy.

But first, a few memories.

On October 25, 2016, the New Albany City Hall website publicly divulged plans aimed at facilitating a “reconnection to Silver Creek.” The otherwise sad-sack area by the creek, beneath the two bridges, would be gussied up to look better. The flavor of the moment? Why, it was the removal of barriers to recreation.

“We will remove barriers and encourage access to some of the most scenic and natural areas of our waterways,” stated Mayor Jeff Gahan. “Silver Creek has long been a place of natural beauty, and these measures will allow more residents to enjoy them.” 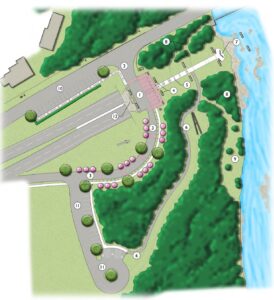 The latter was quietly and unceremoniously aborted, with nary a press release, following the airing of NIMBY objections by nearby property owners.

In the diagram to the left, released by the city in 2016, the Providence Mill low head dam is visible in the upper right-hand corner. #7 in the legend is described as “overlook, access to creek.” The key point in all this is the absence of any mention of kayaking or canoeing, which is surprising given the city’s history of propagandistic grandiosity during the Gahan era.

Had the possibility even occurred to them?

After the initial beautification project was completed circa 2017, there would be no further public mention for more than three years about using this “access point” for kayaking or canoeing. The first reference I can find to such an adaptation came in a news story by WFPL’s John Boyle on August 5, 2020: New Albany Officials Look To Amplify Natural Amenities With Trail Projects.

People will once again be able to take non-motorized boats, kayaks and canoes on the water. Some of the preliminary pieces of the project are already in place, including a small parking lot and decorative lighting near the waterway. Though the timeline is still fluid, Mayor Jeff Gahan said he hopes to see some portions completed in the next few years.

By the summer of 2020, kayaks and canoes had entered the mayor’s field of vision, and yet is was left somewhat vague, as though the city was in a hurry to announce something even if the plans (and more importantly, the financing) hadn’t yet been determined.

It started making sense seven months later, when in March 2021 the River Heritage Conservancy announced its Origin Park “blueway” intentions, including removal of the dam, yielding an unimpeded kayaking and canoeing route upstream past the abandoned Armstrong Bend access point, to the Blackiston Mill road crossing (article here). Origin Park’s kayak and canoe landing area would be adjacent to the road crossing.

The rest is his-story. Yurt dwellers in Mongolia already know that Gahan, who five years ago opportunistically encouraged the removal of barriers to recreation on Silver Creek, now favors keeping these barriers in place, or at least one of them: the Providence Mill low head dam, the dismantling of which is key to the entire Origin Park blueway plan (and which also corresponds to current best practices all across the country).

We have no way of knowing when the city of New Albany’s drain trust added the component of kayak and canoe launches to those original pre-existing plans from 2016. Nothing was said about it at the time. Now they’ve become paramount to cock-block Origin Park’s work. Somewhat notoriously, Gahan in effect has boycotted the Origin Park planning process from inception, going so far as to term the whole idea “radical.”

Coming from someone who is being purely reactionary, that’s rich.

If Gahan’s last-ditch appeal succeeds, and the Providence Mill low head dam remains in place, there’ll be three predictable outcomes: (a) Origin Park’s blueway plan will be severely compromised; (b) Gahan’s preferred “Jeff’s Kayak Shack” installation below the Silver Creek bridge will be the prime beneficiary, likely to be quickly constructed using whatever cash the mayor is capable of finding beneath the Reisz Mahal executive sofa cushions — or better yet, perhaps leveraging some of the $16.83 million in federal COVID recovery money; and (c), the “NIMBY” property owners further upstream who are opposed to public use of Silver Creek for recreational purposes will be pressed by a victorious mayor to join his circle of campaign donors.

In short, the case against removing the superannuated and dangerous Providence Mill low head dam on Silver Creek can be summarized as the need to assuage Jeff Gahan’s seemingly boundless ego.

The case for it is stated here by the River Heritage Conservancy.

River Heritage Conservancy is a local citizen led non-profit created to improve the Southern Indiana/Louisville region’s health, business attractiveness, and quality of life through creation of a world-class and iconic public park for all.  One of our core tenets is that by bringing people and organizations together, new collaborations can be created that advance the “art of the possible” for our region.  We believe that local citizens, nonprofits, governments, and businesses working together is the best way to create thriving, healthy, and livable communities for all.

We are aware that an appeal was filed with the Indiana Department of Natural Resources that calls into question the State of Indiana’s approval to remove a hazardous low head dam under the Providence Way bridge.  This project is one of the early elements the Conservancy’s work.  Following our commitment to transparency, we thought it helpful to provide background on the project to you, our partners and donors.

Let’s go to the beginning.  Since 2015, at dozens of meetings with hundreds of residents, civic groups, governments, and businesses, broad community interest was shared with the Conservancy about taking steps to improve the region’s quality of life by embracing and activating local public waterways and shorelines, including Silver Creek.

Starting in Scott County, Silver Creek is a 38-mile-long public waterway draining 97,000 acres in Southern Indiana.  It is the primary watershed in the Southern Indiana MSA.  Making Silver Creek healthier for fish, improving its water quality, and enhancing safe access for paddlers were high on nearly everyone’s list of “Why Not?” initiatives that could quickly make our region healthier and more active.

During these discussions, the Indiana Department of Natural Resources and the US Fish & Wildlife Service came on board as they share interest in improving the ecological function and health of this special Indiana creek.

This is complex work.  The team brought on board one of the state’s leading watershed experts to guide the initiative, Indiana Aquatic Ecologist and River Restoration Specialist Dr. Jerry Sweeten from EcoSystems Connections Institute, LLC.

The first step was identification of hazards that negatively impact the stream’s health for people and wildlife.  This is how the team ended up at the Providence Mill dam seen here.

Low head dams just like this one are the cause of multiple fatalities each year across the nation, including three tragic deaths on North Carolina’s Dan River in June 2021.  Providence Mill dam is on the State of Indiana’s hazard list.

Before kayakers and canoeists can safely enjoy Silver Creek, this abandoned chunk of concrete across the stream must be removed.

The short WFYI documentary linked below gives a brief overview of how the removal of abandoned low head dams is a common-sense practice to improve public safety and environmental quality on Indiana’s waterways.

Over, Under, Gone: The Killer in Our Rivers (wfyi.org)

An onsite meeting at the dam was held on October 18, 2020, with local governments and state natural resource agencies to complete pre-permit discussions for safe removal of this stream hazard.  Following this, a public hearing was hosted by the State of Indiana where a super-majority of attendees supported the safe, thoughtful, and ecologically responsible removal of this decaying and purposeless concrete structure.

As excitement rose around what a healthy and safe paddling stream could do for our community’s health, big and small donors sparked a local grassroots effort to make this public blueway happen. The citizen-driven campaign smashed the anticipated funding timeline.  Enough private donations were raised to allow this project to go-ahead without using ANY local tax dollars.

The public conservation agencies’ permit processes are now underway, kicking off long overdue restoration of Silver Creek.  Appeals are a normal part of any public permit process.  While the recent appeal on removal will likely add delays and increase the total cost for the project, the agencies and funders behind this conservation effort anticipate speedy resolution, and look forward to completing this progressive and unifying project for our community.

We are excited about the partnerships growing around this project, and the benefits that a free flowing, ecologically healthy, and safe Silver Creek will bring to our region.  Be assured that we remain positively committed to always welcoming and building new collaborations with governments, non-profits, businesses, artists, and residents across the region to make Southern Indiana an even better place to live than ever before.  Onward and Upward!!