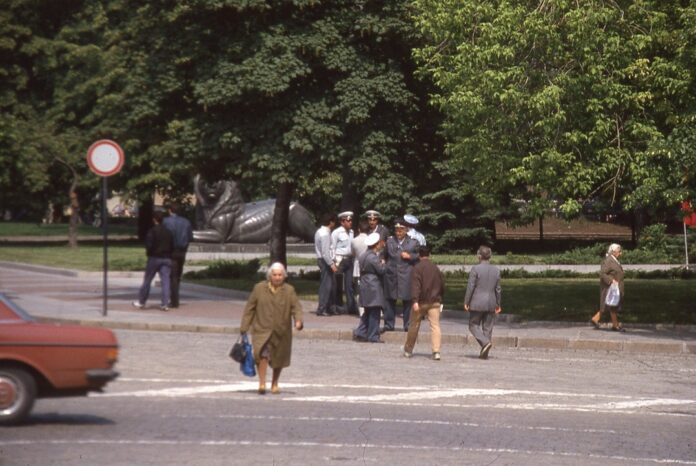 Yesterday, a review of a book about Bulgaria during the Cold War.

Books: “The Cold War from the Margins” in Bulgaria

34 years ago Tuesday (June 1, 1987) I arrived in Sofia, capital of the People’s Republic of Bulgaria. I’d taken a bus from Skopje in Yugoslavia, probably via Kumanovo and Kyustendil. Nowadays it’s a three-and-a-half hour trip. Back then, navigating the border crossing alone took at least ninety minutes, and the roads overall weren’t as good.

As an aside, I had been in neighboring Greece in 1985, and took the precaution of obtaining a Bulgarian visa from the embassy in Washington DC before departing America. My half-baked plan that year was to take the train from Athens to Thessaloniki, then north to Sofia. After that, maybe hop another train to Istanbul?

I had a few things to learn about the pace of life in the Balkans at the time.

So the Bulgarian visa was in hand, as well as the Thomas Cook rail timetable, but when it came time to decide I just couldn’t pull the trigger. I was only two weeks into my first visit to Europe, and it was a tad daunting when it occurred to me there’d be two sets of unfamiliar alphabets (Greek and Cyrillic), one of them Communist.

Hoping there’d be another time, I opted to ride the rails from Thessaloniki to Istanbul, a wonderfully scenic journey. Near Strymonas, the junction for travel north to Sofia, big black mountains rose to the north. They remained in my mind’s eye until 1987. What was behind them?

I remember very few concrete details from my brief time in Sofia, although I clearly recall being the only American on the bus, with seven other passengers altogether making the trip from Skopje. At the border, the Yugoslavs yawningly waved us through. The Bulgarian police were uptight and seemed prepared to confiscate my Let’s Go: Europe book, but they relented, and the subversive budget travel text stayed with me.

The language barrier was daunting. Only Russian was useful as a foreign language, and fortunately I knew numbers and a few words. By then I’d taught myself the Cyrillic alphabet, which at least made it easier to decipher place names and street signs.

From the bus station in Sofia, I walked directly to the tourist bureau. Following the fashion of many such agencies in the East Bloc, it wasn’t a particularly welcoming establishment. The bureaucracy was stifling, and the terms of a mandatory daily currency exchange  baffling. In effect, visitors had to have verification of “approved” accommodation for each night’s stay, or face fines.

But I’d been led to believe that rooms in private homes were available, if dependent on the whim of tourist office staff. I was due for a lucky break, and got one. My “hotel” was the living room in the flat of a pensioner, with lots of books written in languages I didn’t know how to read. Some had pictures.

The room was within walking distance of everything I’d have time to see. I slept on the couch, and it cost only a few dollars per night. Given the mandatory currency exchange, there was ample cash left over to eat functional meals and drink draft beer in the workers’ cafeteria located down the street. Meat, potatoes, a vegetable and multiple beers ran three, maybe four dollars at most. These were marvelous institutions, pleasingly egalitarian and unparalleled for people watching.

In 1987, the expanse of yellow painted bricks in Battenberg Square (called 9 September Square during the Communist era) was filled with people strolling, not cars.

The structure with columns, to the right, was the Georgi Dmitrov mausoleum, where the Bulgarian Communist leader’s embalmed corpse functioned as the main attraction of a pilgrimage site comparable to Lenin’s tomb in Moscow. In 1990, Dmitrov’s remains were cremated and buried, and in 1999 the mausoleum was dynamited.

I desperately wanted to visit the official museum of Bulgarian Communism, which reportedly contained the prison pajamas and shaving kits of Dmitrov and other iconic figures, but it was already closed on Monday by the time I made it there, and it never opened on Tuesday. I’m guessing it has since been liquidated, too. At any rate, a short walk from the mausoleum brought me to the spectacular Alexander Nevsky Cathedral. 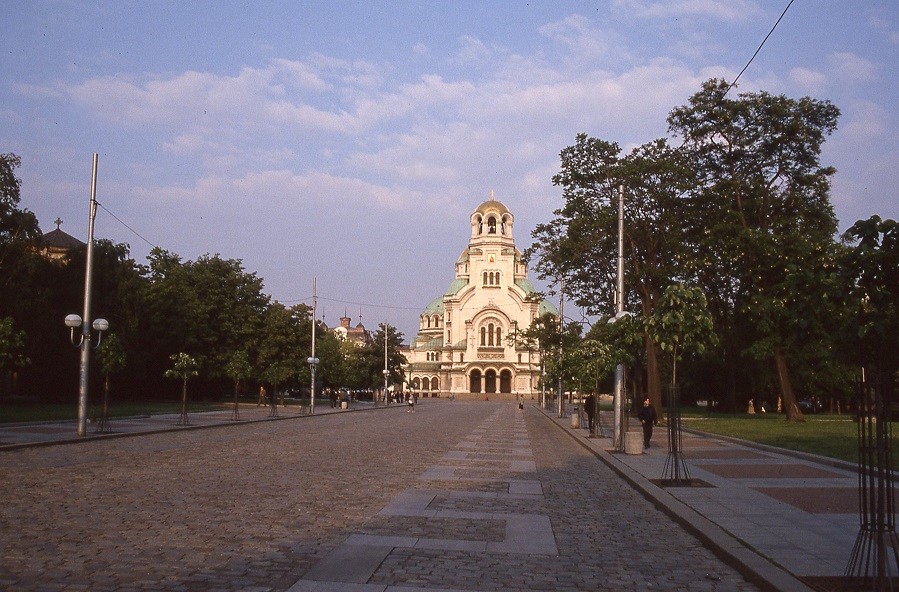 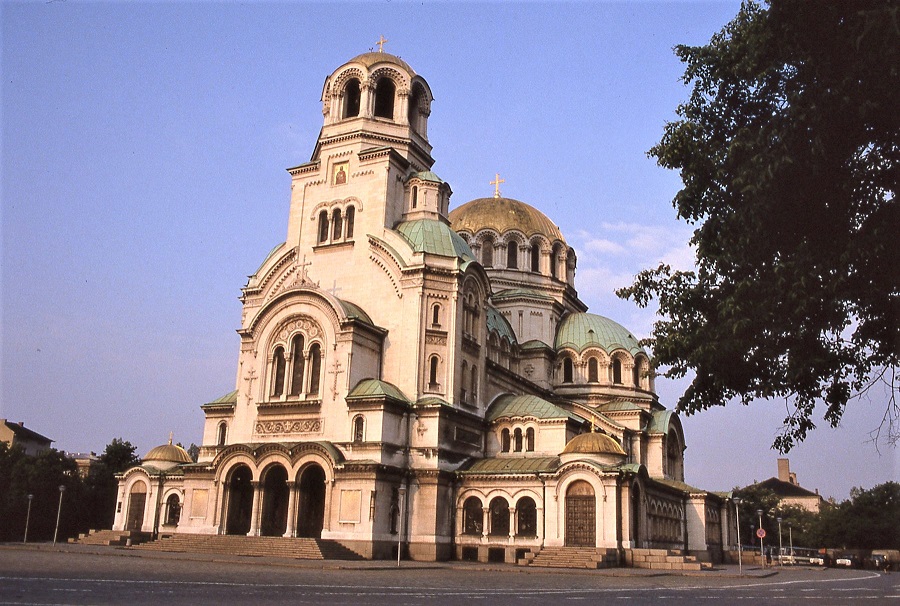 The cathedral was built in honor of Russian soldiers who died in the war to liberate Bulgaria from the rule of Ottoman Turkey (1877-78). Cultural affinities generally were cited to help explain why Bulgaria was among the more loyal Soviet satellites (see yesterday’s post for a more nuanced reading).

Next, two buildings facing the cathedral.

There is no explanation for my taking this photo apart from a fascination with the gold-painted bricks, mocha stucco and a pleasingly exotic overall ambiance of Balkan-ness. It was utterly transfixing.

My room was a walk-up somewhere along this street. 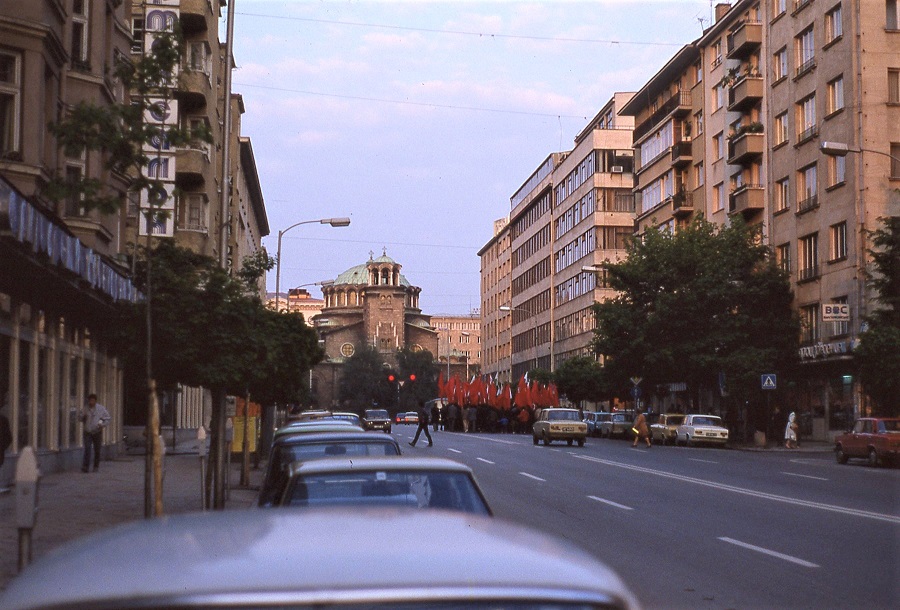 The group wielding flags was walking toward St. Nedelya Church. There were various aggregations parading through downtown that evening, leading me to surmise an organized event of some variety. According to my notes, all museums and churches were closed on Tuesday. There was little opportunity to go inside, and so I must have spent the entire day walking. 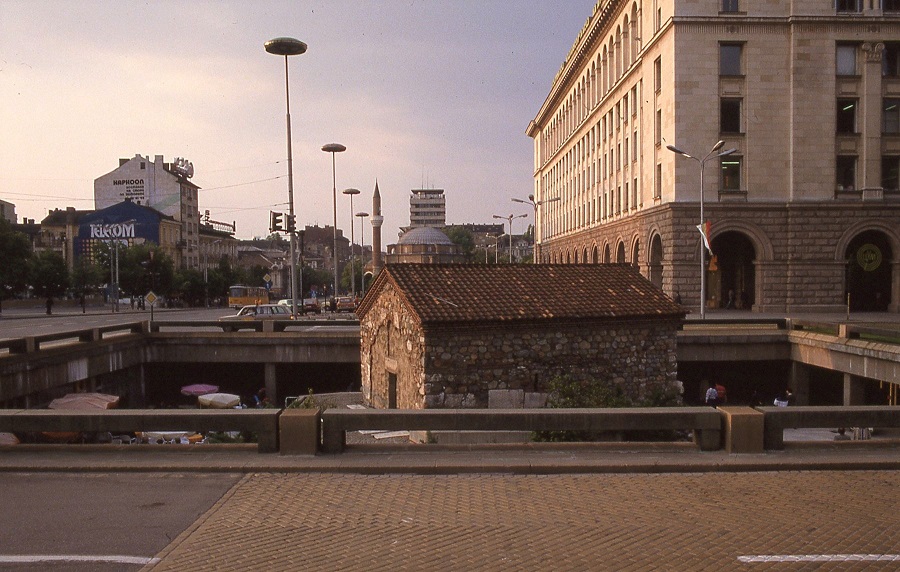 In front by the subway stop is the medieval Church of St. Petka of the Saddlers. Up the street is the Banya Bashi Mosque. A synagogue also was nearby, though during the Communist era it rarely opened. For more about the oppression of religion in Bulgaria from 1949 through 1989, this excerpt from the Library of Congress is informative.

Just to the right of the sunken church and a block away was a secular cathedral: Communist Party headquarters, one of three buildings dubbed the Largo, and built in the 1950s. Here the red nerve center can be seen over the rooftops, complete with the standard issue red star. 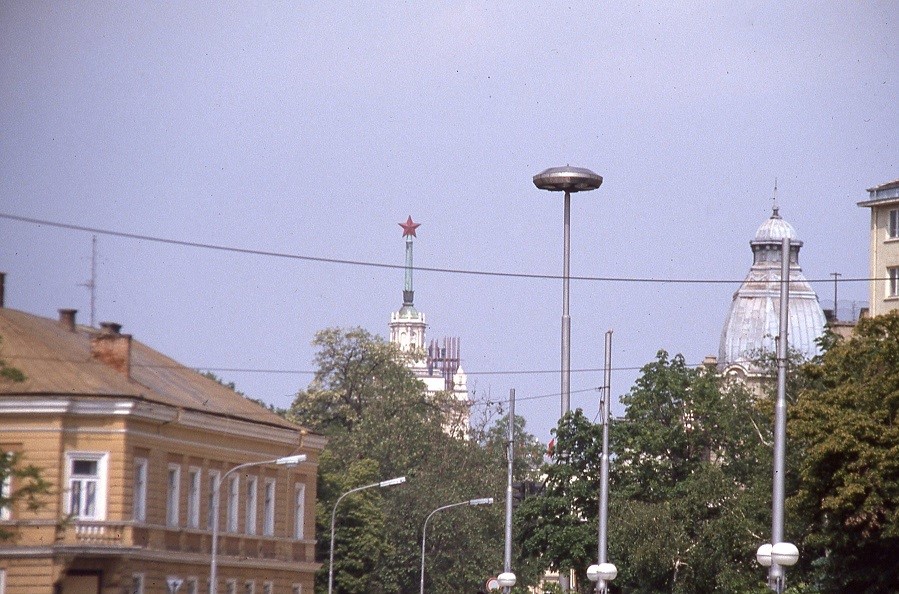 It took some doing to unravel the next photo. 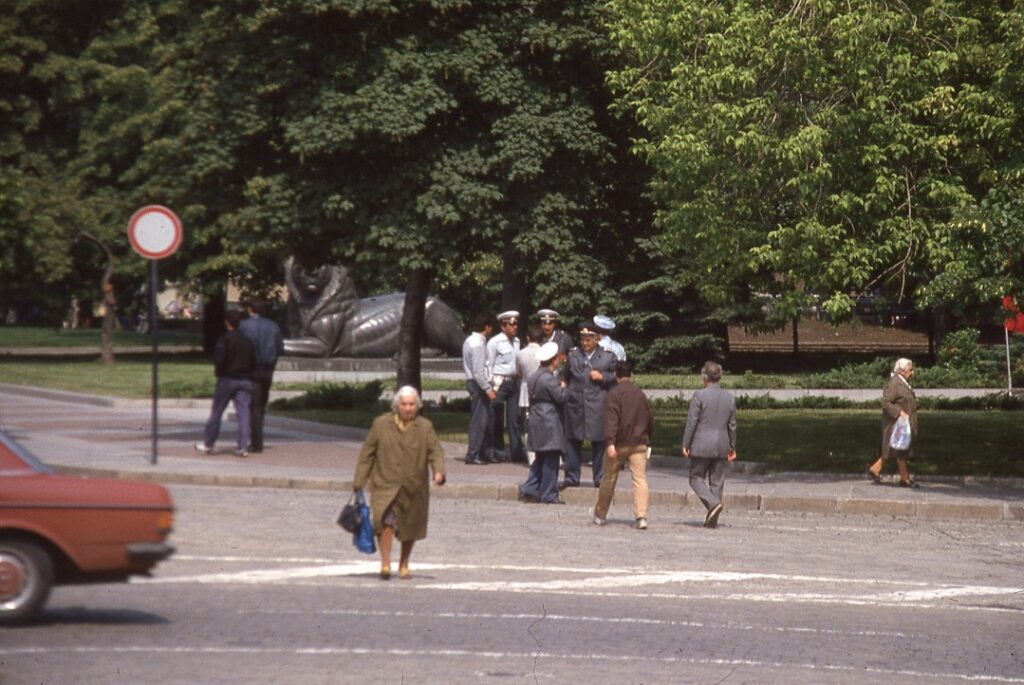 I can’t recall even seeing the seated lion sculpture behind what was intended as a vignette of Sofia street life. In fact, the lion marked the entrance to Bulgaria’s Tomb of the Unknown Soldier. Finally, there is Sofia’s Monument to the Soviet Army. As far as I know, it still stands. The main soccer stadium’s lights are seen behind the heroic statuary. 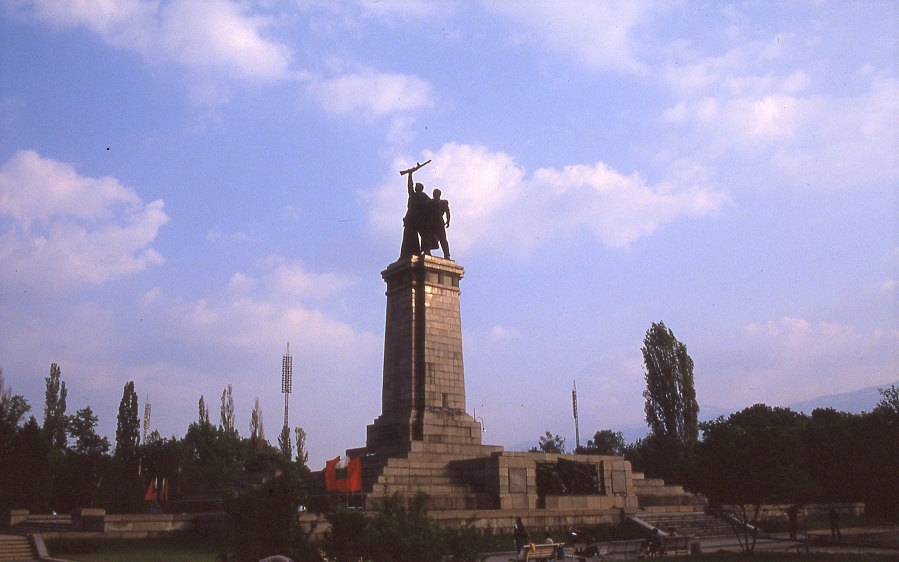 Click through the article at Wikipedia to see what has happened in recent years to the sculpture at the base: “Soviet Army soldiers as the American popular culture characters: Superman, Joker, Robin, Captain America, Ronald McDonald, Santa Claus, Wolverine, The Mask, and Wonder Woman.” 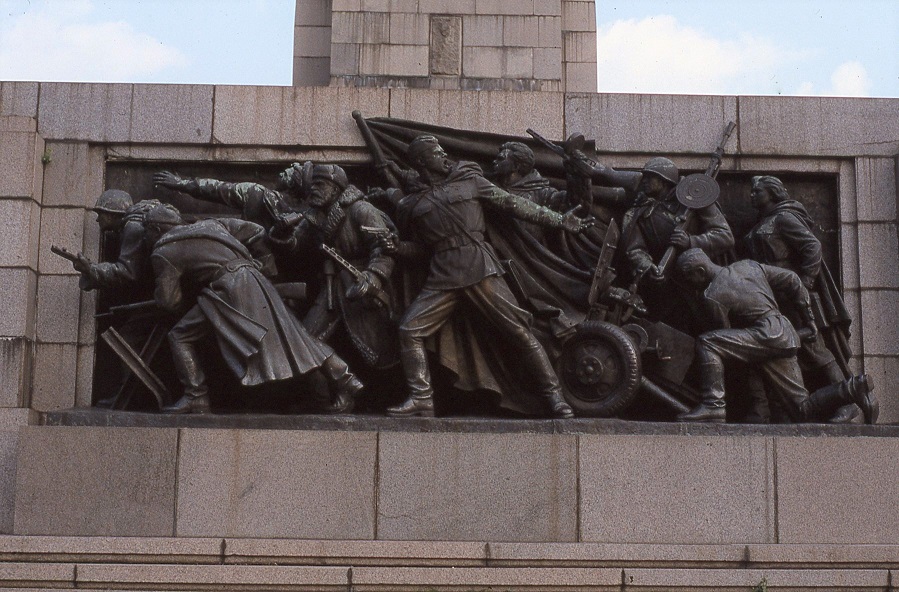 Somewhere nearby, I stumbled across another Cold War relic: a statue of Leonid Brezhnev, leader of the USSR for 18 years until he died in 1982. 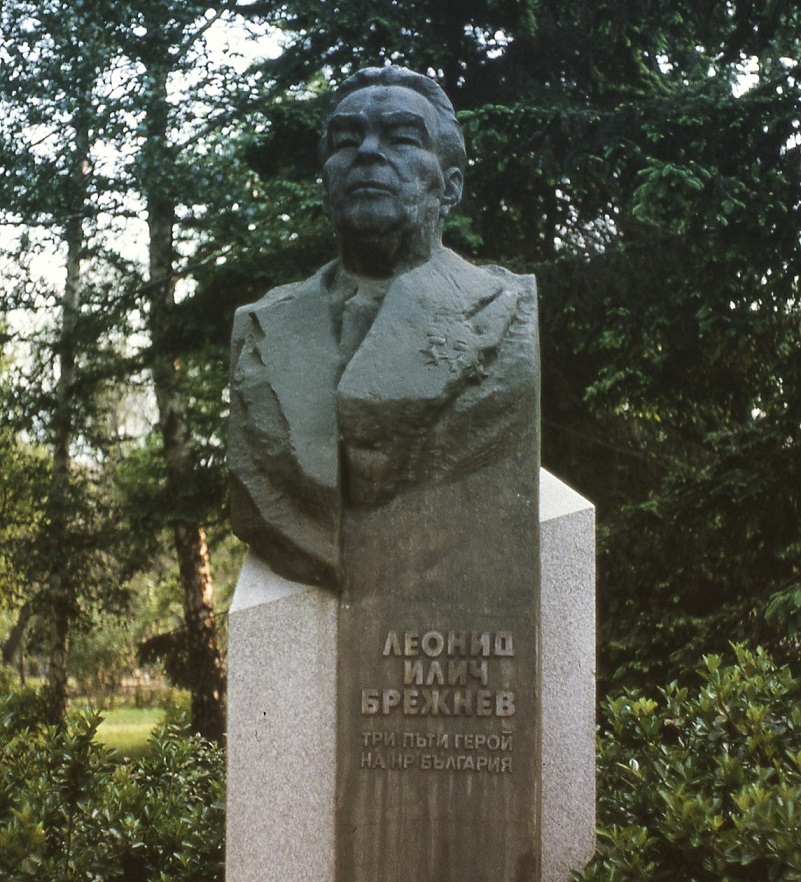 The final photo is a mystery to me, these many years later.

My recollection of this scene is that the building was either the American Embassy, located until 2004 in the city center, or near it. If it was in fact the embassy, then these ladies may have been absorbing a bit of cultural outreach, which brings me full-circle to yesterday’s post about the role of culture in Bulgaria during the Cold War.

Next stop was Hungary, a story for another time.