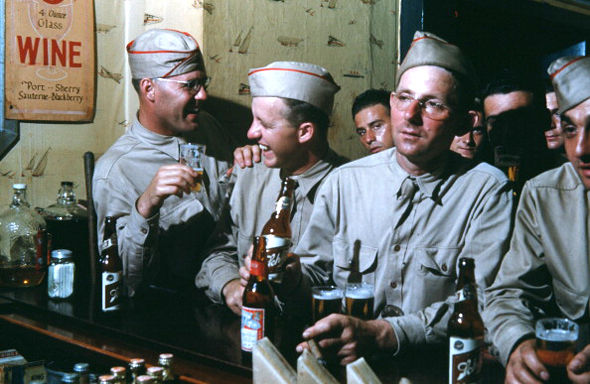 A few year ago at a bar I frequented, one of the younger 30-something employees was pushing hard for a Memorial Day promotion to honor deceased former soldiers.

He was a veteran himself, and obviously well-intentioned, but the idea made absolutely no sense. Management allowed it to go forward, primarily so the employee would get it out of his system and (perhaps) return to his duties, and it struck some folks as beautiful and uplifting.

Not so much for me. Allow me to explain my reasoning.

As a disclaimer of sorts, it is true that I never served in the military. But my father did, and also many of my uncles, and I’ve known a great many veterans, serving both in conflict situations and during peacetime.

I’m not telling this story to be a prick.

Rather, it is precisely because I’ve known so many veterans that I feel most of them would be inclined to agree with me once they’d considered my thoughts on the matter. In short, the remembrance in question proved to be more about the person devising it than those it was meant to honor.

The names of deceased veterans were written on cards, with biographical information. Customers were asked to pick a card and buy a beer of their choice for the man or woman listed. The cans and bottles were opened, the draft beers poured, and they were set aside along with the cards in a pre-determined spot atop the bar, for all to see.

When this idea was first announced, I asked what appeared to be two extremely relevant questions: What happens to all these beers, and who gets to drink them?

The organizer looked at me like I was a space alien.

It doesn’t matter, he said; the honorees themselves can’t consume them, and it’s all about the emotional impact of seeing all those full beers crowding the end of the counter. It’ll be very moving, highly Instagrammable, and then we’ll just pour the beers down the drain.

Later I learned that he didn’t even like beer, but I digress.

All I could do was scratch my head and ponder the reaction of any of my drinking buddies for 40-plus years since high school, veterans or not, had I even once suggested we spend good money on beer for the express purpose of wasting it – even bad beer.

Symbolism can be fascinating, yes, although in my chosen habitat wasting beer always was heresy, blasphemy and a solid reason to have your ass kicked, symbolically or otherwise.

But to hell with me and my needs.

My father was a Marine Corps gunner on a Navy ship in the Pacific during WWII, and I can recall him telling stories about those providential, invariably brief periods of leave; a bit of relaxation for a day or three on one of various safe islands, every now and then offering an opportunity to eat a real meal and drink a few beers, courtesy of the United States government.

Then it was back aboard ship to dodge more kamikazes.

Look, I don’t doubt that for some, symbolism outweighs waste. It’s just that I can’t help thinking not a single one of those departed veterans would agree.

They’d say wait — donate the money to someone who needs a meal, or plant a tree, or if you’re going to buy beer with it, for God’s sake couldn’t you at least drink it, and maybe say a toast to our memory rather than be more concerned with form than function?

I’ve never been more confident of an assertion amid a lifetime of being outspoken than I am right now, at this very moment, in saying that if my dad and his WWII veteran buddies were alive today, to be informed that the current generation seeks to honor them by pouring cold (well, actually quite warm after resting on the counter all day in late May) down the drain, they’d be incredulous, and to a man reply this way: “That’s the dumbest shit I’ve ever heard.”

And yet, from wedding toasts through eulogies, and from memorials to celebrations of all sorts, there are times when the “honor” is more about needs of the ones giving it than the realities of the ostensible honorees.

Let’s all come together, have a few beers, and chat about what those veterans did; what they went through, and why they were compelled to do so.

Because when it comes to those who’ve experienced wars on a first-hand basis, isn’t the best tribute to them a determination to stop these violent exercises in futility?