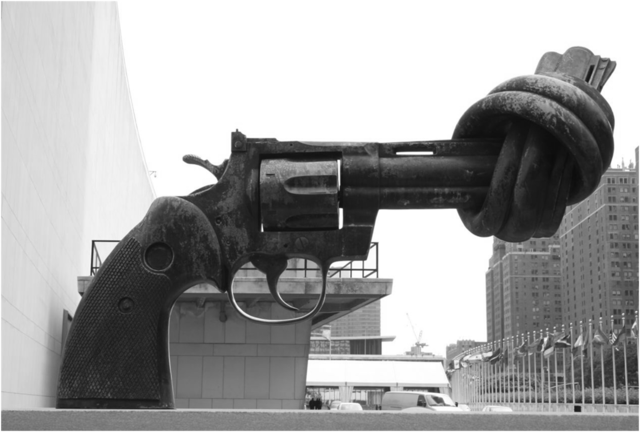 The last time I can recall shooting a gun was in the Bicentennial year of 1976.

The firearm in question was a muzzleloader of the Civil War era, perhaps a facsimile, but fully capable of being discharged. My father and his buddies, who annually drove to Wyoming to hunt deer, were conducting their annual target practice session. A friend of a friend brought the muzzleloader.

I had no interest whatever in firearms, and enjoyed walking the countryside without the added weight, but as a history buff from an early age, something about the vintage muzzleloader struck me. I wanted to shoot it. My father naturally approved, although he duly warned me: it can have a slight “kick.”

Slight, my ass. A rhino’s kick is more like it.

The recoil sent me flying, which struck the adults as humorous and left a massive bruise on my shoulder. I tried as best I could to be a good sport, and frankly, I remain grateful for the experience. It helped me understand how tough those generally scrawny, undersized and malnourished soldiers back in the day had to be to fight a war with mini-cannons.

The upshot: I grew up around guns, and as an adult, I’d prefer guns not to be around me.

Guns are roughly akin to cars, sportsball and Viagra as penile enhancement devices, and I already have a penis, thanks.

Pieces of machinery generally are value-neutral, their performance dependent on the guiding mind of humans. Conversely, human minds infected with machismo, conspiracy theories, hatred, and just plain variable mental health issues offer as much cause to frighten me as the typical armed robber, who after all, just wants money.

But: I’m no prohibitionist in a one-size-fits-all kind of way.

My own professional world of alcoholic beverages symbolizes the axiom “legal but heavily regulated,” and this seems appropriate. You need a gun to cope, and I need a bottle. More alcoholic beverages to redress alcoholism? Questionable, but I’ll get right on it. Dozens of guns to protect yourself against your own demons?

Hey, whatever gets you through your life, it’s all right, just so long as others aren’t deprived of their lives. Leave me out of the gun fetishism, and we’re good.

For further reading, here’s a 2015 article from The Economist.

… This dilemma is an iteration of a broader question: whether keeping guns makes people safer. A growing majority of Americans think it does—another mistaken conviction. Daniel Webster of the Johns Hopkins Centre for Gun and Policy Research says that, other factors being equal, keeping a gun at home is associated with a double or triple risk of homicide. What holds for homes is also true of states and countries: more guns mean more gun-related murders, tragic accidents and suicides.

Yet, amid the drumbeat of bloody news, well-meaning, fearful individuals take the seemingly rational decision to arm themselves. Almost all plan to be prudent with their guns. That, alas, is what everyone thinks.