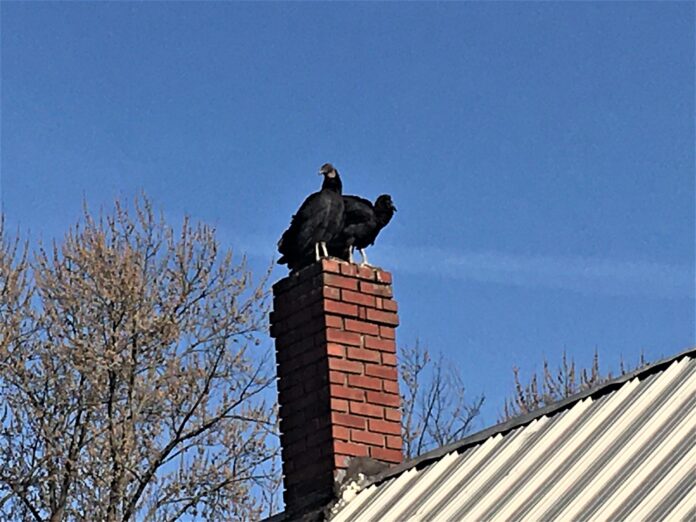 Last week we went for a walk to the pharmacy on a day with clear skies and warmth in the air, too early for spring but not by much.

We were situated on Clark Street between Chartres and Charlestown Road when Diana stopped, pointed and asked, “What kind of birds are those?”

We weren’t the only ones to notice the three big black avian creatures flying like Stukas in formation to a welcoming chimney, where they landed as one and began grooming themselves.

I immediately answered “vultures,” then thought better of it and changed my prognosis to buzzards, and yet they didn’t look like the scraggly buzzards of youth out on the farm when I was a kid.

By this time every dog on the block was barking, and people began coming out of houses. Them three ominous vultures kept right on grooming themselves.

We all agreed they were carrion pickers, and after we got back home, the internet filled in the rest of the details. These black vultures hunt by eyesight, not smell, but they’ll ride shotgun on buzzards, whose noses know. They’re further north than they should be, because our climate has changed in spite of what your dumbass uncle says. And, although one can’t begrudge their cleanup of roadkill, they’ll also attack livestock (and probably those yapping dogs) when times get tough.