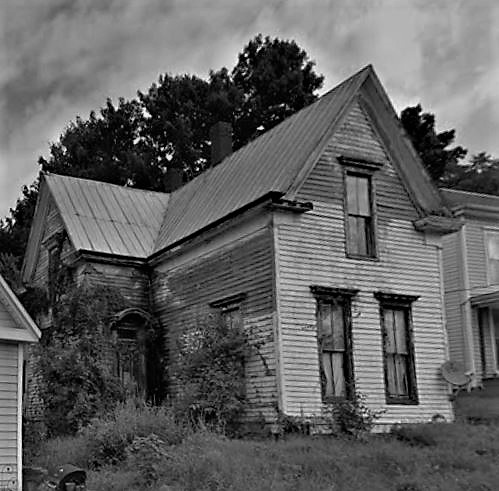 My dentist practices in a rural community a good forty-minute drive from where I live near Louisville. The route passes through the town where I was born and raised. Fortunately I have good teeth; the doc always reminds me that my teeth are upper-echelon genetic marvels. This is reassuring, and as such, the long commute into the hills is tolerable because I need make it only twice yearly for cleanings.

As I drove slowly through my old boyhood stomping grounds on a sunny March day, I saw a man inspecting the street-side window of a bleached, sadly dilapidated old wood-frame house a few doors down from where the bank did business when I was a kid. Even though my glance was brief, mere seconds, it was obvious that he was proceeding cautiously, almost gingerly.

From nowhere a thought suddenly struck me. Had I been the last person to attempt painting that house? Likely, yes. It would have been 1979 or 1980, with my friend Manny. The man who lived there was our summer season boss at the ballpark, where we temporary jobs as groundskeepers.

Our boss Darby was a pudgy little guy in his early forties with thinning hair and big sideburns, a chronic ne’er-do-well but friendly, with a big heart and fine intentions. His house probably was a century old even then, and it hadn’t seen much in the way of maintenance for years. The bones were good; the skin ravaged.

Darby appeared to spend much of his time conspiring to stay away from home and family, volunteering for every imaginable community-service project. His wife was a domineering woman roughly twice his size, a stay-at-home mom with two shell-shocked children who took it in stride good-naturedly as she spent most of the day on the couch watching television and barking orders.

Before someone anyone interjects that I’m being sexist or judgmental, I’m merely recording what I saw those many years ago. I’m sure Darby’s wife had her strong points. My social worker spouse has taught me that people do the best they can with the tools at their disposal, and I believe it. Functionality is an ever-mutating concept.

At the time the situation made me sad, especially when Darby tried luring us inside on day one with the prospect of bologna sandwiches for lunch. Granted, I came from a place where neat freaks reigned supreme; still, I simply wasn’t prepared for the squalor. It was disconcerting. The TV was loud, and Manny joined me in begging off.

We could eat later. After all, Darby had waved a hundred dollar bill at each of us, and it was big money at the time. Why, my exhausted fake ID would burn a C-note’s worth of beer in record time. Food? Purely optional.

It seems that Darby had been browbeaten into painting the house, and he had no intention of doing it himself. He was also in charge of spending the small pot of money that had came to the town in the form of a state grant to improve the ballpark, as well as funding our salaries as groundskeepers.

Given that by summer’s end Darby was in trouble with the town about a discrepancy in the books (a misunderstanding, he told me), I’d bet that the painting crew was being paid out of the grant, which probably paid for the brushes, too.

But not the paint, which was white, thin as skim milk and resting in cans that looked like they’d survived Pearl Harbor. Seeing as the cans had been pried open before we even started the job, it’s likely that Darby watered the latex before we got there.

My father the ever-practical handyman had profound misgivings about my credentials to finish this painting job, so he prepped me. The main lesson was to scrape off as much of the old paint as possible, or else, as my dad explained, the inferior paint Darby surely intended to foist on us would wash away with the first heavy rain.

Manny and I began the job one scorching summer Saturday morning. Darby was at work until noon, so we went to opposite sides of the house and began scraping paint, a process that immediately ground to a halt when we couldn’t find a machete or two to hack through the verdant weeds, gnarly vines and unkempt shrubbery forming veritable walls around the decaying wood.

Frustrated, Manny drove back to his house to fetch some of his dad’s yardwork implements, and I kept at the scraping in places I could reach. A sturdy ladder would have been nice. The one Darby suggested we use wouldn’t have borne the weight of just one of my size 15s, without my foot in it.

When Darby appeared before lunch, he came running, waving his arms, red-faced and somewhat unconvincingly angry. “Who the hell said anything about scraping,” he yelled. “I hired you to paint the house.”

Then he surveyed the growing brush pile. “Well, just paint what you can reach,” he shrugged. What about the house’s second story? Darby pointed at the aforementioned ladder, the first rung of which disintegrated into dust after Manny kicked it loose from its resting (rotting?) place wedged between two abandoned fuel oil drums.

But quickly bored, somewhat defeated and fearing the resumption of his wife’s directions, Darby nodded in surrender. “I know what we need for the upstairs,” he said, scampering off to the ballpark, to “borrow” one of the paint roller extenders used to coat remote sections of the grandstand.

By the time Darby got back, Manny and I had decided to capitulate, too, and we began sloshing the diluted white paint wherever we could reach a surface. As we did, bits of Chester Arthur-era cornice came floating to earth along with ancient nails and the detritus borne of twenty autumns without a raking. We kicked the debris into the jungle and kept going.

It took until dusk, but we had learned life’s intended lesson about subordinating a job well done to the needs of the moment. It was one small step for Darby, and one giant leap toward our approaching cynical adulthood. We understood that our boss was appeasing his wife by doing the bare minimum, and if the paint cans were empty in the end, everyone would be happy.

The quality of the work was the very last consideration.

The final gun sounded, and Darby was delighted. His wife obviously had no intention of coming out into the stifling heat to grade the exam. He now produced the pay packet — a single one hundred dollar bill, as promised, which after all he had shown each of us in turn, separately, and now it was in desperate need of being broken so we each could take home half of it. We were tired, burned by the sun and thirsty, with no interest in litigating.

“To the package store, Manny…and step on it.”

(names have been changed)