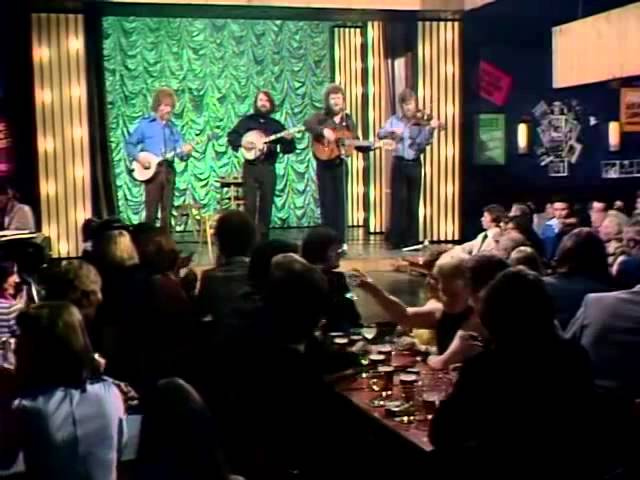 In which three fascinating Anglo-Irish topics collide amid my frequent references to the adjective “elegiac.”

It’s the mid-1970s lineup of the Irish folk band The Dubliners, performing on a throwback British television show called The Wheeltappers and Shunters Social Club, depicting a fictionalized working men’s club — a form of private pub with ale and stronger drink, in addition to indoor recreation (snooker, darts), or a haven for what Americans would refer to as “blue collar” workers.

The WMC’s original purpose was to provide the Victorian working man with a controlled environment in which to socialise and drink. Over time it has morphed into a lingering bastion for traditional community activities. It provides an affordable way for local people to meet, enjoy live entertainment and play games (in The Telegraph, below).

The full episode of The Wheeltappers and Shunters Social Club featuring The Dubliners used to be available on YouTube, but has now been removed. To piece together the experience, here’s a clip from a different episode that summarizes the experience, followed by two numbers by the band.

I’ve written about The Dubliners many times. During the band’s most fabled and productive period in the 1960s and early 70s, they were the Rolling Stones of traditional Irish music.

The American roots magazine Dirty Linen, contrasting the Dubliners and the Clancy brothers who emerged around the same time, wrote: “Whereas the Clancys were well-scrubbed returned Yanks from rural Tipperary, decked out in matching white Aran sweaters, the Dubliners were hard-drinking backstreet Dublin scrappers with unkempt hair and bushy beards, whose gigs seemed to happen by accident between fistfights.”

Jim McCann performed only briefly with The Dubliners, whose best known members were Luke Kelly and Ronnie Drew (the latter absent in these clips), but McCann committed to vinyl the definitive version of “Carrickfergus,” and he sings it here.

For me, it never fails to produce goosebumps. Meanwhile, obsolescence has overtaken much of this television show’s conceit.

Wheeltappers and shunters are railway workers. They were commonly employed by steam railways in Britain and elsewhere, but still are found both on British railways and in Eastern Europe. The name of the programme thus echoes that of the many social clubs set up by railway workers in the 19th century, many of which are still in existence (known as British Rail Staff Association clubs), even if they no longer have a direct connection to the railways.

Last orders for the Working Men’s Club? by Hannah Marshall (The Telegraph)

The number of working men’s clubs in the country have halved in the last 30 years. Hannah Marshall investigates why these great British institutions are worth saving.

Off Barking Road in London’s East Ham, just past the shops that always have their shutters down, a square, concrete building sits within a sprawling housing estate. Go inside this inconspicuous space on any Friday, Saturday or Sunday and you’ll be met by an unexpected sight: families of several generations grouped around tables —grandparents, parents, children, cousins, nieces, nephews — enjoying live music and socialising. Follow through to the sports room and a group of young local men will have congregated to play pool or darts and watch the football on the TV. This is the East Ham Working Men’s Club and it’s a place where everybody knows your name.

The Dubliners completed a 50th anniversary tour in 2012 and called it quits. The band’s last surviving original member, banjoist Barney McKenna, actually died before the celebratory concerts were finished.

Far-off 1977 was the final year for The Wheeltappers and Shunters Social Club television series, and much like fraternal orders in the US, recent decades have not been kind to the prospect of the continued existence of working men’s clubs.

Speaking personally, while it isn’t a direct analogy with working men’s clubs, my wife’s cousin belongs to a private club in Plymouth UK, for centuries the Royal Navy’s main port city. Most of the club members are from working class family backgrounds as stevedores, shipyard employees, bricklayers and construction workers.

The first time we went there in 2009, there was no real ale, but by 2013, the pendulum had taken a swing. The Fort had a cask-conditioned bitter from Skinner’s in Cornwall (Betty Stogs, perhaps), and it was delicious.

To be sure, if I’d have found myself in a working men’s club in Sheffield or Newcastle in 1977 at the age of 17, with cask ale being served and an Irish band playing, I wouldn’t have understood any of it.

Now I do, and that’s why we all fantasize about time travel. It’s making me salivate just writing these words, and there’s not a hand-pumped bitter in sight back here in Nawbany.