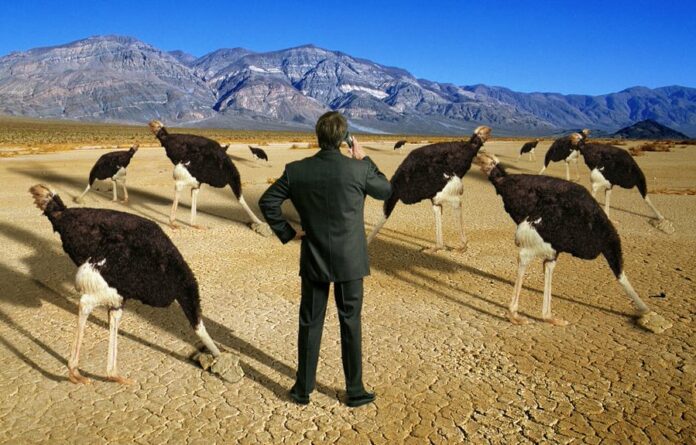 Nawbany was awash in cascading waves of irony the past week, and seeing as we’re not the sort of city that appreciates the variety of honesty that irony elicits, my brief return from internal (infernal?) exile is merited.

According to reliable reports on social media, it appears that Mayor Jeff Gahan was involved in an automobile accident on Monday afternoon at the contested intersection of Klerner Lane and Mt. Tabor Road.

First and foremost, we believe no one was hurt. Had there been an injury, and if any of it had been relayed by the picked-over carcass of deceased local media, I would not discuss the accident in this space.

So, disclaimers aside, it was reported that on Monday the armored mayoral SUV (Nawbany lacks Saudi-sized oil reserves, but galdurn it, we have a sewer utility cash cow) t-boned a smaller car, with a photo clearly showing the mayor talking on his cell phone, probably with Rudy Giuliani (or the city attorney, whichever one picked up first), and absent the pandemic face covering timorously beseeched by his safely captive city council.The witness who broke the story added that the mayor then left the scene before police arrived.

Wait — you may be asking, “forget bad driving, Roger, but why is the intersection contested”?

Originally the mayor sought to place a roundabout at this precise location, as part of a barely plausible multi-million dollar “improvement” project for Mt. Tabor Road, which local residents spent something like five years contesting, at their own expense, accurately characterizing it as an expensive boondoggle, constructed in such a way as to attract even more speeding cut-through traffic in a residential area, thus contradicting the claims of proponents in City Hall (and nowhere else) that traffic would be slowed and calmed for all time.

These neighborhood advocates, those fated to live adjacent to the “improvements,” felt strongly that with increased traffic there’d be even more instances of vehicular mayhem, a prediction scornfully rejected by the mayor, who blamed partisan politics, and in essence asked residents whether they believed the mayoral clique or their own two eyes.

As documented during the past two years, and now proven in 2020 by the automobile-supremacist mayor himself, their own two eyes proved plenty accurate.

Naturally the residents were never once asked whether they wanted road “improvements.” The project was imposed from above, by the elites.Welcome to Nawbany, pilgrim — and if you don’t have a car, you’re not really welcome at all.

—In fact, as this baleful year of 2020 limps to the finish line, motor vehicles of all stripes are moving way too fast all over town.

In response, City Hall continues to insist with a straight face that we should believe the increasingly illusory, North Korean-style press releases, which breathlessly laud the unprecedented achievement of universal street grid calming and pervasive lawfulness, as achieved throughout the city by the shining wonder of perfect governance.

But I live on Spring Street, and can attest that these claims are utterly fictitious, or as my father might have put it, “bullshit.”

Apart from obvious examples like chronic speeding at all hours of the day, there’s the noisy and disruptive HyperCar auto polishing and sales lot located in my East Spring Street neighborhood, which in the beginning claimed it would be servicing cars only, and not selling cars, at least for a very long time, but forgot the promises almost immediately as city officials yawned, and currently has so many fancy souped-up race cars crammed into its lot that some of them must always be parked (illegally) on 13th Street, with HyperCars employees and customers getting their jollies by taking all these cars on cacophonous spins around the block, dozens of times each day, while shifting, revving, squealing tires, screeching and emitting bursts of metallic flatulence that I’m guessing combine to produce something akin to an orgasm.

As such, and in an instance of profound irony that comes close to matching the mayor’s Mt. Tabor mishap, on Thursday evening one of hyper-diaper’s cars parked illegally on 13th Street was creamed by a hit-and-run driver, who paused long enough for nearby residents to emerge from their homes and chase the fleeing driver to Market Street. 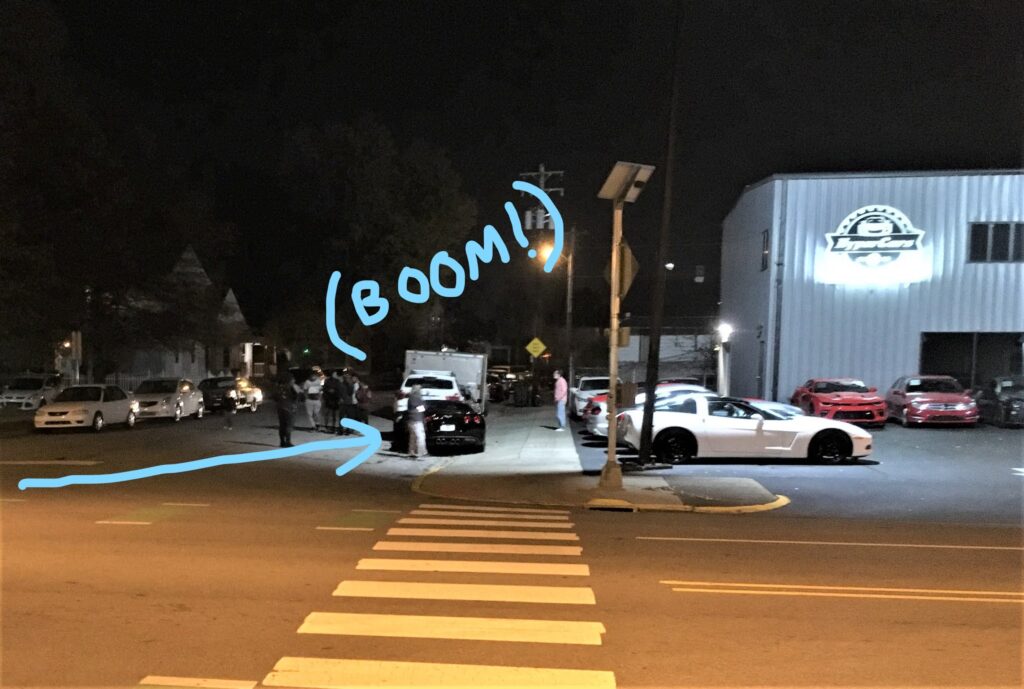 I considered risking bad karma by laughing my ass off, but didn’t. A better response is crying in frustration at the perennial backwardness displayed by Nawbany.

Here we are in Midtown, supposedly a municipal showplace for genteel “blue” progressivism, and instead of urbanism we have hyperactive race cars on one side of Spring at 13th, and the failed candidate Oxendine’s clown-car discount funeral home on the other.

And our presumed neighborhood leaders? They’re AWOL, as always.

What makes the irony of the mayor’s recent driver-ed fender bender even more delicious is that it transpired in the yard of a neighborhood resident who helped leaded the opposition to the Mt. Tabor “improvement” project.

She heard the crash and snapped a photo of the two damaged vehicles, with unmasked mayor (literally and figuratively) standing in her yard. Upon publishing the photo of a public event that occurred in front of her house, the ruling elites circled the wagons and commenced slagging, leading to the usual drooling defenses of the mayor as a wonderful human being on a par with Gandhi, or perhaps even the departing humanitarian Donald Trump.

Again and again I’ve pointed out that quite a lot of New Albany’s foot dragging pertaining to complete streets, walkability and all-purpose urban modernity — the city’s abject refusal to so much as try leveling the playing field via mobility solutions not reliant on internal combustion engines — stems from the abysmal and persistent ignorance of elected and appointed public officials who, in effect, have neither been anywhere nor seen anything, and who wouldn’t be caught dead reading a book if the pages slapped them in the face like the palm fronds adorning their hard seltzers.

City Hall has willfully botched these equations ever since Gahan began consolidating power, because power in little-pond Nawbany is about campaign finance funding from pay-to-play skimming, the proceeds from which simply cannot be generated by walking or biking projects. Rather, automobile supremacy equals cash. It’s unfortunate, but true.

At least the mayor now has direct experience of what it’s like to run afoul of city streets he’s done so much to curate in his own image, and I can only hope that some sweet day he’ll take the debacle a step further and attempt to use one of his favored push-button (un)controlled urban crosswalks, with their tiny flashing yellow lights ignored as hot rods roar and tow trucks cruise at 60 mph on “calmed” stretches of Gahanesque speedways, learning in accordance with those of us who walk, and despairing of making it to the other side alive.

Maybe then, at last, he’d grasp the profound disconnect he has imposed on those without cars. Yes, it means he’d have to go out for a walk, and admittedly that’s about as unlikely as a Democratic Party grandee being spotted on a bicycle. But a boy can dream, especially when dreams are all we have in the complete and unmitigated absence of principle.

The errant politician probably won’t have to answer for it; his handlers will shelter him, and the super-duper-hyper-racecar place will deny that it creates daily mayhem on residential streets, but I’m just happy with any dent, real or metaphorical, placed in our local default of automobile supremacy.

Maybe we’ll get a clue, some day. After all, even a stopped pre-digital clock is right twice each day.