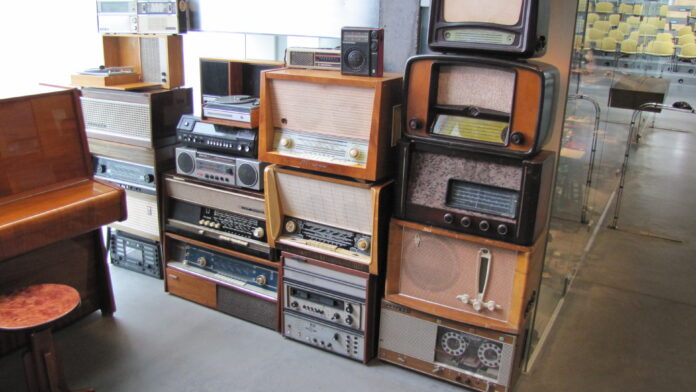 The novel is called When the Doves Disappeared, written by the Finnish/Estonian author Sofi Oksanen. The English translation was released in 2015. The publisher Penguin Random House offers this helpful plot overview that gives away very little:

Communist Estonia, 1941. As the Allies and the Axis clash in battle, two Estonian cousins are fleeing from the Red Army: Roland, a loyal freedom fighter, and Edgar, an opportunistic mercenary. When the Nazis take control of the country, Roland goes into hiding. Edgar abandons his wife, Juudit, and transforms himself into a loyal supporter of Hitler’s regime.

Flash forward to 1963: Estonia is back under communist control behind the Iron Curtain. Edgar has taken on yet another identity as a Soviet apparatchik, desperate to hide the secrets of his past and maintain his connections to power. But his fate remains entangled with Roland and Juudit, who may hold the key to uncovering the truth. In a fast-paced page-turner that switches between these two time periods, Sofi Oksanen brings to life an unforgettable story of deception, surveillance, passion, and betrayal.

Upon finishing the novel, I read a few reviews by random “books and reading” bloggers, most of them presumably half my age. Their assessments varied, some good and others not so much, but few if any of them were aware of the Estonian historical context, without which it seems unlikely they’d be able to grasp Oksanen’s broader canvas.

This strikes me as sad and a tad disturbing.

Estonia, located on the Baltic south of Finland, had never been an independent nation prior to the immediate aftermath of World War I. Estonians were a people with a native culture and distinctive language, but the Estonian experience invariably was dominated by more numerous and powerful outsiders: Danes, Swedes, Russians and Germans, at times seemingly all at once.

To admittedly oversimplify, even with the period of independence from 1920 – 1940, Estonia was a small republic with Russians/Soviets (Commies) directly to the east and Germans (Fascists) indirectly to the west, stuck uncomfortably between the two, with few good options for security once WWII drew closer. The ground is flat, and Estonian cities vulnerable. There were forests to shelter guerrilla fighters, and these play a part in the novel.

When Nazi Germany and the Soviet Union cynically agreed to spheres of influence and repressive occupation, Estonia was swallowed by the USSR. The Soviets immediately commenced eliminating all Estonians who were deemed to be anti-communist. Soon after Hitler overran Estonia and settled scores with his “anti-German” enemies in route to conquering Stalin, which didn’t work out very well, and by 1944 Uncle Joe was back in control. Communism remained entrenched until 1991, when Estonia took advantage of the USSR’s sinking ship of state and managed to secede, setting into motion the complete Soviet collapse.

How sweet it was, except that a half-century of German and Soviet overlords left Estonia both free and destitute. Nothing is simple, although it’s not far-fetched to suggest that the past three decades have been a golden age for Estonia.

The overriding point, and the pretext of the novel, is that when there were a few hundred thousand Estonians in this territory, including resident Germans, Russians (and among others, Jews), each successive occupation amid history’s most destructive war became yet another life-or-death decision about allegiance on the part of ordinary people. We know what it meant for Jews. It should suffice to say that Estonians made decisions, and inevitably suffered retribution whatever their choice.

You’d almost have to be a narcissistic sociopath to make it through this maze, and accordingly Oksanen’s central character, Edgar, is precisely that. His only real skill is a slippery survival instinct perhaps capable of borderline admiration if not for the terrible human toll accompanying his 180-degree ideological turns, from lukewarm Estonian patriotism to enthusiastic Nazi to equally all-in Communist, each requiring cover-ups and sacrifices (of others) to avoid ruinous contradictions.

Edgar also is homosexual, which clearly is the sole aspect of his being that must be kept hidden at all costs. It isn’t clear whether he dares to risk self-knowledge to any appreciable extent. Edgar obsesses over self-control at all times, to better manipulate others, and more importantly, to manipulate himself.

Edgar’s wife Juudit bears the brunt of his psychological brutality, eventually embarking on a genuinely loving, fulfilling relationship with a German officer during the Nazi occupation. The plot twists needn’t be revealed, because one accepts that there can be no good outcome for her once the war’s tide turns. When at last it is revealed how Juudit and the officer parted, there is good reason to believe that her story is contrived, and she’s no longer able to separate fact from fiction.

Roland is the genuine Estonian patriot, but even his motives aren’t entirely clear. Ostensibly, he abandons belief in any doctrine apart from learning who murdered his wife-to-be during the German occupation. But apparently Roland’s stubborn determination fades in time. Where has Roland gone for two whole decades following the war’s end?

In effect, the central characters in Oksanen’s novel are double agents, each and every one, compelled to make choices for the sake of their own existence that may or may not reflect who they actually are, while pretending to be something else. It’s seemingly easiest for Edgar, who seems conscience-free in most matters. By novel’s end, it’s clear that keeping his sexuality safely locked away is a form of ravaging self-denial.

But something else is clear as well: Edgar is the only character in the novel who “wins.” As the book concludes in 1966, probably in his mid-40s, Edgar is ascendant. The Estonian is a new Soviet man, and knowledge of history helps us surmise what happens next.

Leonid Brezhnev is in charge of the USSR, the period of communism’s stagnation has begun, and there’ll be no more major purges, just continuity. By the time Mikhail Gorbachev arrives to institute reforms, albeit far too late, Edgar will be ready to retire quietly and fade away without drama. He’ll be around 70 when Estonia regains its independence. Will he ever be unmasked and forced to face a duplicitous task? It’s possible, and yet unlikely.

Perhaps Oksanen should consider a sequel. Unreservedly, I recommend When the Doves Disappeared.